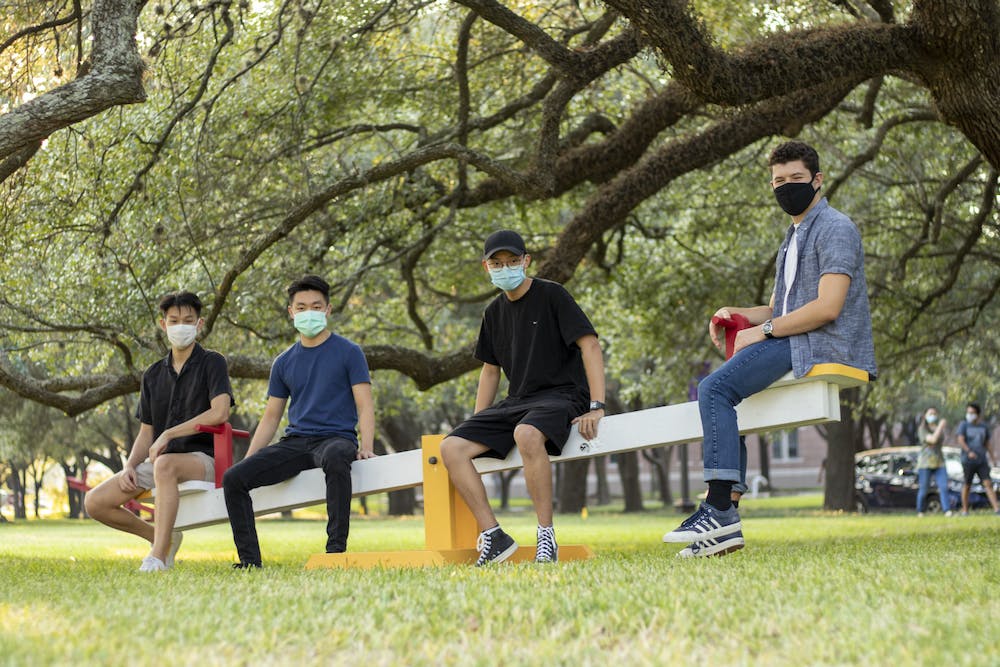 The Moody Center for The Arts’ new outdoor installations, dubbed “Creative Interventions,” is a multimedia collection of artistic works and interactive exhibits that take advantage of temporary structures and socially distanced spaces across campus.

According to Alison Weaver, executive director of the Moody Center, the goal of the installation is to inspire “unexpected moments of creativity” as people walk along the colorful sidewalks, play on the seesaws or gaze at the side of a tent playing a movie of bees working together in a hive. Each of these pieces brings its own unique mindset and imagination to the table and offers an opportunity for optimism.

One of the installations included in “Creative Interventions” features fully functional, colorfully painted seesaw sets proposed by a team of Rice architecture students: Jeff Xia, Peyton Chiang, Joseph Hsu and Spencer Hotelling. Their project, “Twelve Feet Apart,” won a design charrette competition hosted by the Rice School of Architecture, which invited proposals for temporary installations that would encourage safe, socially distanced gatherings. With these guidelines in mind, the team envisioned seesaws that anyone at Rice is free to explore and enjoy as they stroll by the south colleges and the Provisional campus Facilities that have earned Rice national media attention.

The team developed the idea when one of the members suggested a playground theme, and decided to create something that would encourage students’ tactile participation and be  adaptable to student opinions. The student creators hope that the seesaws will foster an engaging, playful environment that offers an opportunity to bring back intimacy during the pandemic which has made such activities more difficult than ever.

“This creates a landscape that induces all who walk past to participate in a new method of social gathering safely and engagingly,” Xia said. “While our project has no intended meaning beyond seesaws being seesaws, we hope that people are able to find valuable moments of fun interaction through the use of the seesaws.”

The seesaws are only one of the many artistic creations that the Rice community can explore in this area. Allison Hunter, artist in residence for the department of visual and dramatic arts, contributed a video creation featuring a bustling beehive at work titled “The Hive at Rice.” The video is projected on the side of Provisional Campus Facility #4, one of the large tents where dual-delivery classes and events have been held this semester. Located at the intersection of  Alumni Road and College Way on the Inner Loop, the projection is set to play on repeat every day from evening until morning.

Hunter says she was inspired by her longtime interest in bees, particularly a phenomenon known as colony collapse disorder, in which a hive would fail to survive after a sudden drastic decrease in the worker bee population. She developed the video by slowing down a recording of bees within their hive and heightening the contrast between light and dark to emphasize the necessity of interdependency in times of need.

“‘The Hive at Rice’ compares the resilience and interconnectivity of the insect community to that of human society,” Hunter said. “You could see the work relating to the pandemic in that we are facing a ‘strange phenomenon’ as well, with COVID-19, just as bees have dealt with colony collapse disorder.”

“Creative Interventions” also invites voices from beyond the hedges. Houston-based visual artist Jasmine Zelaya adds to this diverse collection of public art with “Detroit Red,” a mural painted with gouache and ink on the side of Provisional Campus Facility #3.

Zelaya spoke with multiple student leaders from different cultural backgrounds to contribute to the dialogue about diversity and community during the pandemic. With these conversations in mind, Zelaya presents an image of togetherness in the face of a pandemic that has radically separated us.

“I wanted to create something that spoke specifically to them,” Zelaya said. “I believe it is important for [Black, Indigenous and people of color] to see themselves reflected in their community, and in this instance, on campus.”

Houston’s Color Factory, a special interactive gallery in Houston that invites visitors to enjoy and explore color in creative ways, adds the finishing touch to this first collection of “Creative Interventions” by contributing Color Walk, a rainbow revision of the sidewalk leading from the Inner Loop to the South Colleges. According to Tina Malhotra, chief experience officer at Color Factory, the color palette that was chosen for this color walk was all sourced from carefully selected experiences and places that make Rice and Houston unique, such as white representing the shaving cream used in Baker 13 and brown representing Chef Roger’s cinnamon rolls.

“From the red of Viet-Cajun crawfish to Valhalla’s brown door, each stripe in this installation is carefully sourced from a specific place, thing or experience that makes this campus and city memorable,” Malhotra said. “We’ve driven 444 miles, taken over 1,000 photos, and spent dozens of hours communicating with the university team to create this one-of-a-kind color palette.”

Rice Public Art’s first round of “Creative Interventions” creates a whole that is greater than the sum of its parts, sparking creativity in its viewers and among passersby. The Rice community can look forward to even more installations popping up on campus later this month.

Each piece is an imaginative opportunity to not only reflect on the changed circumstances but also to remember that we can still achieve intimacy and togetherness even in these difficult times. The works can be viewed throughout campus, and at times you may even come upon one by surprise, or perhaps when you most need it.

“Not only is the campus a place for students to gather, but a place for the community to enjoy art and nature both safely and freely in these unprecedented times,” Malhotra said.