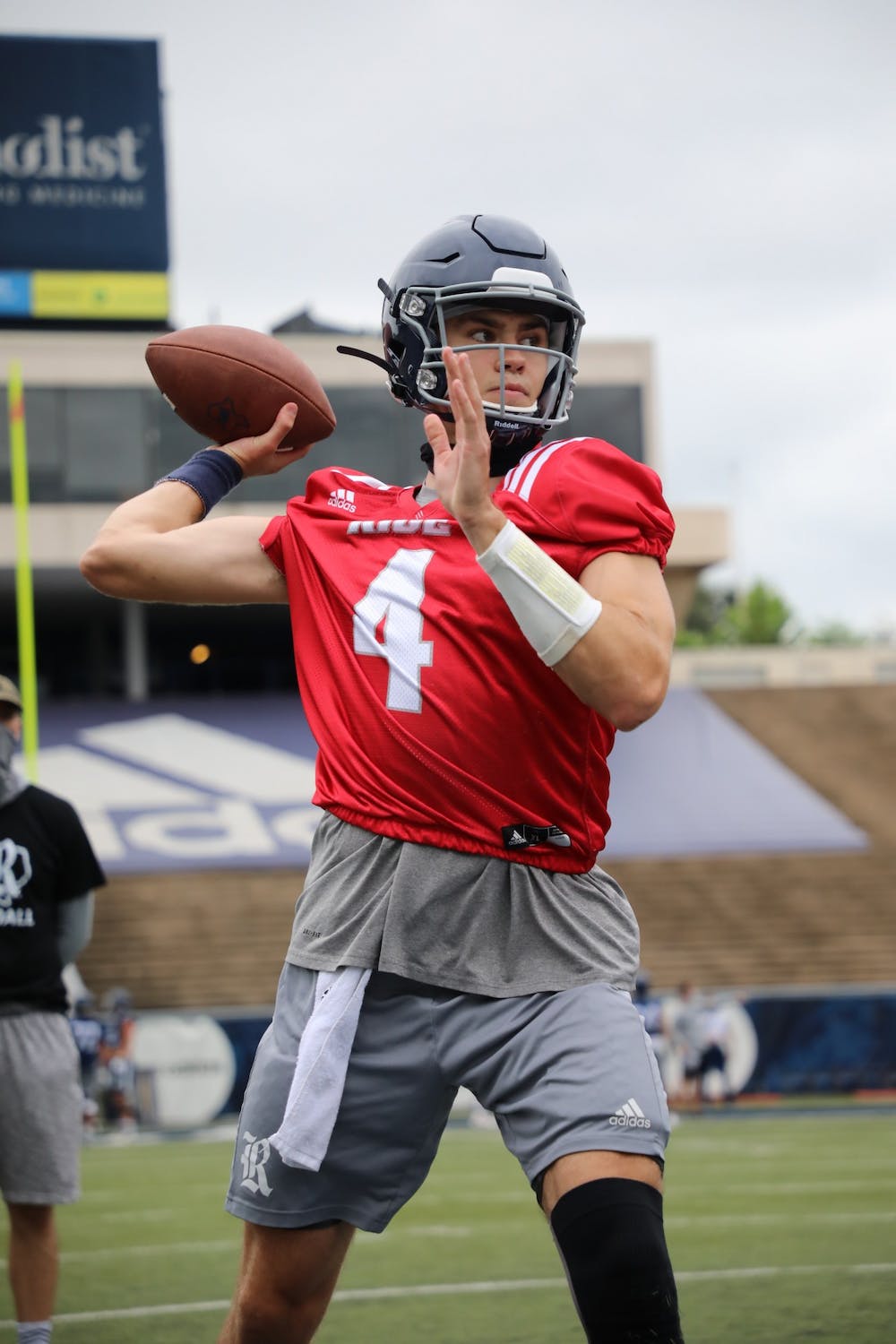 Bloomgren said that Collins has excelled during fall practices, recalling that in one practice, none of Collins’ passes touched the ground.

“Mike has just been a head above, and not just on one day, he’s been consistent throughout camp,” Bloomgren said. “He’s executing our offense at a very high level, and he’s got an unbelievable arm.”

Collins spent two seasons at TCU, after starting his career at the University of Pennsylvania. He appeared in nine games for the Horned Frogs in 2018, starting four of them. Collins threw for 1,059 yards in 2018, completing 56.4 percent of his passes, adding six touchdowns and two interceptions.

“Obviously, [I’m] really excited to get the job, and about what this team can do,” Collins said. “[We’re] taking the momentum from the end of last year and transferring it over to this year.”

Collins said he had an inkling that he would be named the starter, given his play at practice.

“I had a feeling it was coming,” Collins said “I’ve been playing well, but I’m just excited to have the job and to start playing some games.”

Additionally, Bloomgren said that naming a starting quarterback is beneficial for the offense.

“[The decision] has become very clear,” Bloomgren said. “When you’re in the situation with the ability to name a starter and get him all the work with the [first team], it’s better for your football team.”

According to Bloomgren, Collins faced competition for the starting job from JoVoni Johnson, a redshirt freshman. Johnson made four appearances, including one start, for the Owls last season.

“JoVoni will have a role in our offense,” Bloomgren said. “He has our trust, and we’d be very confident in JoVoni going in for a series, or for any number of plays.”

Bloomgren said that Johnson, a gifted runner, will be used both as a running threat as well as in the passing game.

“The whole playbook will be available [to us], any time JoVoni is in the game,” Bloomgren said. “[He] will be a great tool.”

As for the rest of the offense, the group feels confident in the offensive scheme. Collins said that the extra meeting time the team has had this fall — the start of practices was delayed due to the pandemic — has given the team a better understanding of the offense.

However, just this weekend, the Owls lost an important piece of their offense. According to Bloomgren, redshirt junior wide receiver Bradley Rozner had surgery and has opted out of the 2020 season.

“[Rosner] is a talented player, [but] it’s just next man up,” Collins said. “We’ve got a lot of receivers, [there are] a lot of guys getting reps in fall camp. We’ve gotten the chance to gel with a lot of guys, and I feel confident in whoever’s out there.”

The Owls have just a week and a half of practices left before they open their season, at home, against Middle Tennessee State University.