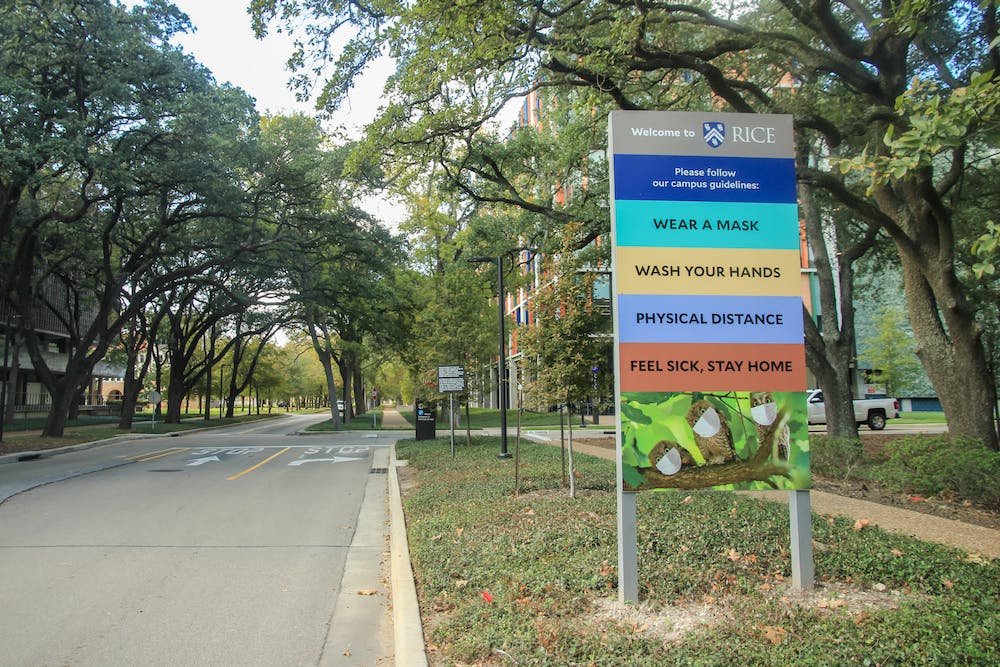 The mask policy involves informing visitors that they must wear masks at all times when they are on campus unless they are actively eating or drinking, according to Rodriguez.

Rodriguez said he considers mask enforcement a process of educating. However, he acknowledges that it has posed some difficulties.

“It has been somewhat of a challenge because we are the only place that I’m aware of in Harris County that requires you to wear a mask outdoors even if you’re exercising or with your spouse or with your family,” Rodriguez said.

Gecy Obambo, a Martel College freshman, said she is unsure if RUPD is doing anything at all.

“I always see joggers run through campus without their masks on. Sometimes RUPD drives by but they don’t do anything,” Obambo said. “I guess they’re not handling it as strictly as I thought they would be.”

Rodriguez attributed the frequent observations of maskless visitors to the increasing responsibilities of RUPD and the size of the campus.

“Our call volumes are increasing as opposed to in the summer when there was not a whole lot of things going on so we could give a lot more focus to mask policy enforcement. We still do it, but we also have other calls we have to respond to,” Rodriguez said.

Jared Lyons, Will Rice College’s chief justice, said he feels that RUPD has done a good job asking students to wear masks, but not visitors.

“For visitors though, I’ve definitely seen a lot of people venturing on to campus, like families or people biking through and I don’t think I’ve ever seen any of them wearing masks. I don’t know if it’s necessarily on [RUPD] to confront these people,” Lyons said. “If [RUPD] is really putting it on themselves to enforce that, then I haven’t really seen them do that necessarily.”

Rodriguez said that with a campus size of almost 300 acres, and with five to seven officers on duty, it is a lot of territory to cover 24/7.

“There’s going to be those that we don’t actually see that students may see,” Rodriguez said.

However, Rodriguez said that compliance with the policy has increased since the semester began.

“I can’t say we are seeing 100 percent compliance because there are still people that are unaware or quite frankly they don’t understand, really, if they are not close to anybody and they are walking down the sidewalk, why do they have to wear their mask until they’re told. Then they’ll either put the mask on or they’ll leave,” Rodriguez said.

“For a long time, when we first set the ‘you must wear a mask policy’ outdoors, we knew that was going to be tough,” Kasch said. “RUPD in my opinion has done an excellent job of responding to and continually asking people to be aware, wear a mask, and to continue in that enforcement process. They’ve done a good job.”

Eric Liu, a freshman at McMurtry, said he shares a similar perspective

“Considering how many people I see wandering throughout campus without a mask on every day that aren’t students, and the fact that I’ve never seen an RUPD officer say anything about it, I’m pretty sure they don’t care,” Liu said.

According to Angelica Torres, McMurtry’s chief justice, the chief justices were told to tell Rice students to call RUPD instead of enforcing mask wearing to non-Rice visitors because it can be unsafe to the students. However, Torres said she is unsure of how effective that option is.

“It’s not like every person is staying long enough in a place for you to be able to effectively call RUPD and for them to get there in time and be able to tell them to wear a mask,” Torres, a junior, said.

Rodriguez said he feels as though student involvement is dependent on several variables.

“Each student has to deal with it in a way they feel comfortable,” Rodriguez said. “If they feel comfortable enough educating someone in a nonconfrontational way, then they can do it. But if they do and someone doesn’t seem to be wanting to accept that information, then they should not continue the dialogue and should immediately call RUPD and disengage. While wearing a mask is super important to help us contain and mitigate the spread, it’s not worth an altercation or an argument or anything of that nature.”

Torres said she believes more could be done about the situation.

“A lot of people around Rice consider Rice to be kind of like a park equivalent to like Hermann Park where they can just come, they can take pictures, they can bring their kids, they can exercise, and it’s not being enforced well at all,” Torres said. “I don’t think it’s regularly enforced like how I’ve seen parking enforced so strictly, but [mask-wearing] isn’t.”

Despite student concerns about a lack of mask wearing, more visitors may be on campus in the near future according to Kasch.

“Admissions right now is figuring out ways to have prospective students and their families come on to campus again. For a long time, they were not allowed to come do tours on campus,” Kasch said.