Forgotten Gems: A conversation with Amanda Pascali on the bittersweet teenagedom of her self-titled EP 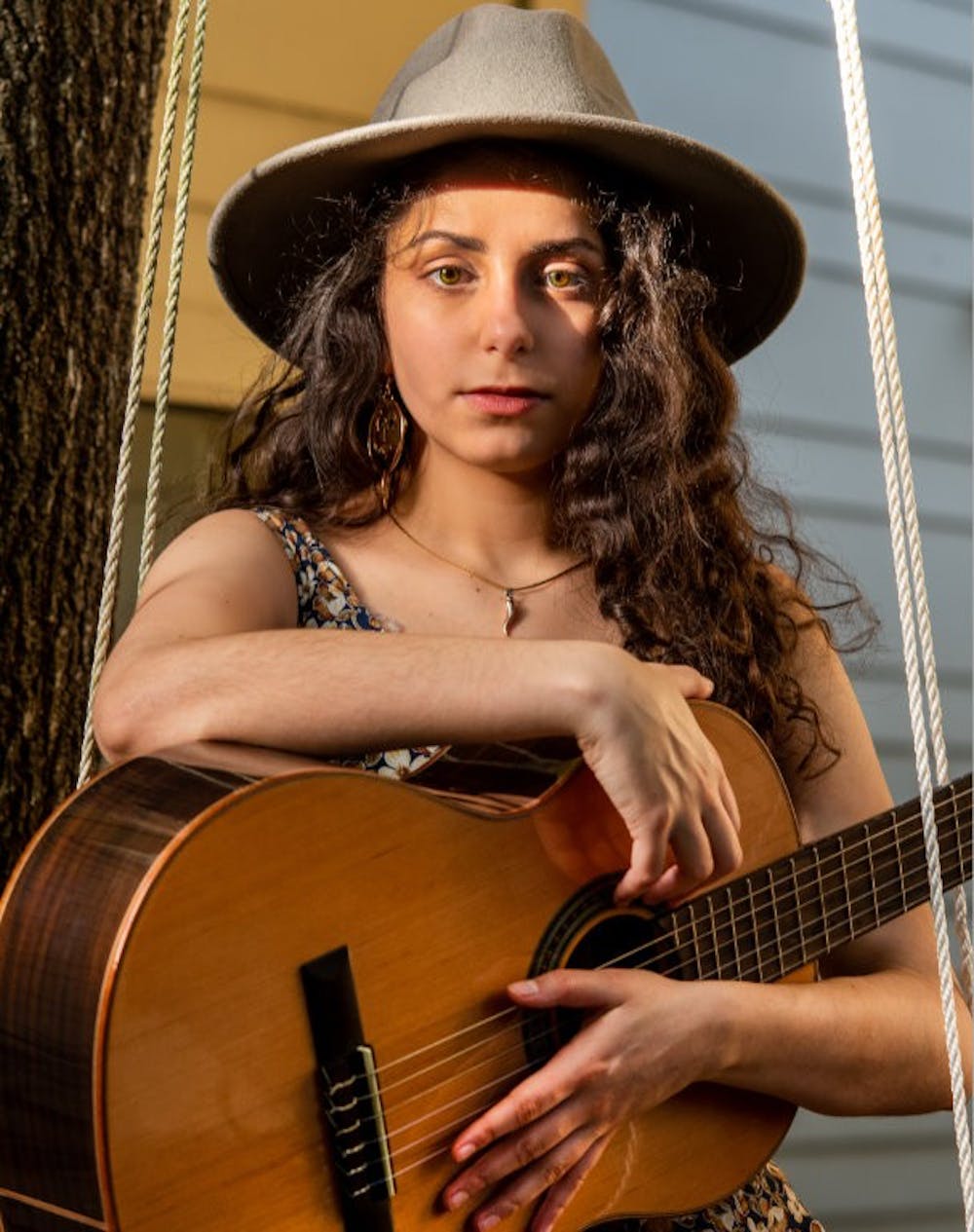 I am obsessed with seventeen. It’s the transitive property, really: I’m obsessed with music and music is obsessed with seventeen. Ever since McCartney howled “she was just seventeen” and Hammerstein celebrated “sixteen going on seventeen,” bands from Marina and the Diamonds to The 1975 have celebrated this liminal year. Seventeen is the terminus of the slow death of childhood but prior to the rude awakening of adulthood. It’s when you sneak out of the house or read philosophy or, in my case, listen to Amanda Pascali.

I’d known of Amanda for a bit. I first saw her when she helped her sister cover “Iris” at my middle school talent show, but I didn’t think much of it. It wasn’t until one of my friends told me “you have got to listen to this” that I stumbled upon her Soundcloud page, chock full of beautifully written and performed folk songs. I started attending her shows and even playing gigs alongside her. Despite this, it took me a full year after its release to start truly appreciating her first project, “The Amanda Pascali EP.” I guess I had to turn seventeen and embrace my own turning point to dive fully into Amanda’s tales of teenagerdom.

Project opener “Fare Thee Well” boldly severs Pascali from her past self, the “kid that [she] once knew,” as she charts her own path into imagining a new identity through the liminality of youth. This path, charted throughout the course of the EP, bends and winds — but that’s a positive, not a negative. It allows the uptempo pulse of “Fare Thee Well” to transition to the slow, harmonized ballad of “Venezia Boy,” where Amanda’s angelic voice soars through layers of reverb and above dawdled-upon guitar chords. “Venezia Boy,” in turn, gives way to the autobiographical yet self-aware nostalgia of “In Between the Alleyways” and the claustrophobic nervous energy of “Ribella.”

The EP concludes with “Mihaela Mihaela,” one of my personal favorite songs ever. Instead of a wordy analysis, I’ll simply describe this song with stories: the first time I heard “Mihaela,” my best friend Sarah was begrudgingly trying to teach me how to waltz and I realized I wanted her to be my friend for the rest of my life. That night, I swore to never look up what “Mihaela” meant. When my friend Ash was in town, she said she would go to an Amanda Pascali concert with me if Amanda played “Mihaela Mihaela.” I DMed Amanda and we got into the bar by pretending to be her cousins even though I am clearly white and Ash is clearly Asian. My freshman year I played “Mihaela Mihaela” on repeat as I wandered the empty quads by night. A while back, Amanda Pascali played a livestream concert and I screamed along to Mihaela in an empty apartment. I cannot explain this song, only beg you to listen to it.

“The Amanda Pascali EP” is not nearly my favorite project by Amanda Pascali, but it is inexorably entwined with so many of my memories. It was an EP that understood me, speaking to my wanderlust, my yearning, my uncertainty, and it scored my year of existential angst. Though Pascali has since joined forces with other incredibly talented musicians to form her band Amanda Pascali and the Family and released some of my favorite music ever (peep their phenomenal 2018 debut “Still It Moves”), this EP retains a special place in my heart.

To learn more about the little known project and to hear her opinions on its relationship to teenagerdom, I reached out to Amanda Pascali to ask her a few questions about the project and her retrospective thoughts on it. An edited version of our interview is below.

JT: What was like it creating this EP? Take us back four, five years.

AP: I recorded the EP at seventeen in my old music teacher’s studio garage space. I played all the instruments in the album — guitar, harmonica, upright bass, percussion. We just went in there and recorded it and then put it on a CD.

JT: Throughout high school, what were your musical and songwriting influences that were pushing you towards this project?

AP: In middle school and high school, I played in a punk band. I’d loved the genre — when I heard punk music for the first time I was like “this speaks to me so much — down with the man.” I liked folk music, but it took me some time to realize I could be just as rebellious with an acoustic guitar as with an electric one.

JT: What was some of the folk music that helped you come to that realization?

AP: Always Bob Dylan. When my dad was growing up in Romania under the dictatorship, he would get Bob Dylan CDs and Beatles CDs on the black market and he played them around the house.

Take the lyrics in a song like [Bob Dylan’s] “Blowin in the Wind,” for example. That’s a punk rock song! While it’s addressing complex issues and it’s rebellious, the lyrics are written in such a way they can be understood by the common person. That’s what folk music is supposed to be about ... music of the common people.

JT: HHow do you navigate complex subject matters in a way people can understand?

JT: When I think of this project, I think of the age 17 — which is one of my larger obsessions in music. I’d love to hear your thoughts on “17” as it relates to life and music

AP:  I think to myself often why we as a society have decided that 18 is an appropriate age for consent and transition into adulthood. For me, the transitional period for me from girlhood to adulthood was 19 or 20.

Seventeen, at least for me, was a dangerous age. You’re teetering on this edge of “Am I a woman? Do I have this freedom to go and make these choices with my own life?” But you’re still a child.

JT: I like to use the word liminal a lot … but what you’re saying is everyone thinks 17 is liminal but it isn’t necessarily.

AP: I guess, as a society, we place certain benchmarks on that age of 17. And for me, in my case, 17 was not my transitional age. In a way, if you look back at the EP, it was a snapshot of my life before I made that transition. That is a snapshot of the teenage years.

JT: On the idea of snapshots, I think of this album in terms of not just songs but also in terms of memories. When you’re writing a song do you ever think about the context it will take in other people’s lives?

AP: I try to imagine how people will listen to my music and it’s wrong but in a way that I am pleasantly surprised by. One of my friends told me she was sharing my songs with her grandpa and he was thinking about how it was related to his experiences. When I was writing my songs, I was not writing these for a Vietnamese grandpa to enjoy and reminisce on his time being exiled from a communist dictatorship in Vietnam. But that’s how it ended up being listened to. And I’m happy there are spaces I could have never imagined that my music is being listened to in.

JT: To that note, are there songs on this project that have taken on a life of their own?

AP: “Mihaela, Mihaela.” Even though I [wrote] it about a specific experience, it has a timelessness about it. That’s why I’m choosing to record it again. It’s different from the other songs in the EP. The other songs are a snapshot, written with the intention of “this is what I’m feeling at this moment.” I didn’t write “Mihaela, Mihaela” back then about who I am now, but who I will be in the future and that is infinite. It was written as a song that was meant to last forever and always be relevant. It has that ambiguity that lets you invent what it’s about and what the timestamp is on it.

JT: On the topic of timeliness, how does it feel to have a project like this floating around the Internet with very specific snapshots of your life?

AP: When I was getting ready to record my first album “Still It Moves,” I was not happy the EP was out there. There came along a time where if I didn’t renew the EP it would disappear from all online platforms and I was debating it because maybe I wanted it to disappear. Now that I’ve recorded “Still It Moves,” I wonder if I will one day think that about “Still It Moves.” In that case, there will be nothing left. I ended up renewing the EP. You just have to be proud of it. It’s  a certain snapshot in time. It doesn’t define who you are now. Even if I hear those songs and I hear bad choices, bad experiences, bad people — and that’s what I hear when I hear those songs — it’s still me. It’s still me when I was 17.

JT: In that case, do you think that you’ll try to make songs that feel transcendental or can change with time? Is that a goal you have when songwriting or does it happen when it happens?

AP: It happens when it happens. I didn’t mean to do it with “Mihaela, Mihaela.” It just happened that way. I think if I achieve that it’s a good thing. Other artists have definitely achieved that timelessness. I’m sure there’s a formula to get there but I don’t know it.

AP: Yeah, or [Like] traditional music that has been aurally passed down for generations. Right now, I’m translating a traditional song from Sicilian dialect to English. That song has been around for hundreds of years. The song is called “I Toss and Turn” and last night I was struggling to fall asleep and kept remembering that song. How is it that in 2020 I’m thinking of this song that was written hundreds of years ago? It’s because whoever wrote it achieved that timelessness. If someone is listening to my songs hundreds of years from now, that would make me happy. That would be incredible.