Culture of Care FAQ updated to include clarifications on amnesty, other general policies 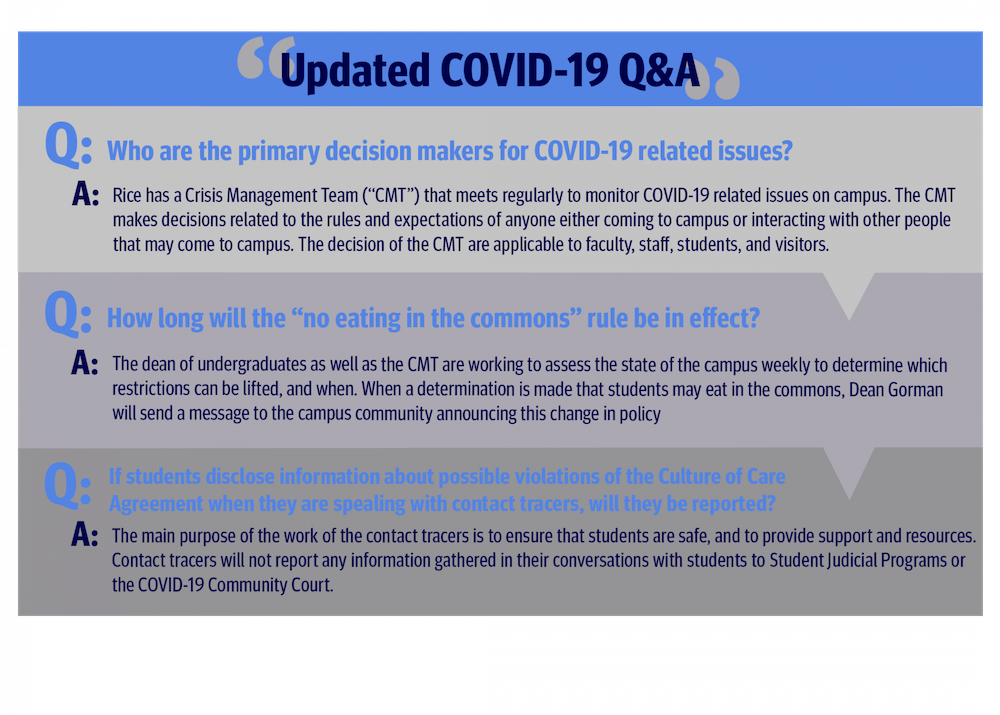 The FAQ section of the Culture of Care agreement was updated in September to include further clarifications on student life, including enforcement and student travel policies. The first version of this document was released to all returning students on July 1 to inform them about the Culture of Care and how it will function in residential colleges, dining and social events.

Some notable clarifications in the new FAQ are that students are not required to wear masks when exercising in the outer loop, and amnesty can be granted to Culture of Care violations.

Timothy Hays, a freshman at McMurtry College, said he has mixed feelings about the new clarification regarding exercisers not being mandated to wear masks in the outer loop.

“On one side, if you are on campus and have to have a mask on, then the outer loop is so close to campus and you are running by so many people … so you should probably have a mask on,” Hays said. “On the other hand, running with a mask on is very possible, but much harder.”

Dean of Undergraduates Bridget Gorman said Rice cannot mandate mask usage in the outer loop because it is owned by the City of Houston.

The Rice amnesty policy protects students and those assisting impaired students from disciplinary action for alcohol or drug use, which incentivizes students to prioritize student health. The amnesty policy also applies to students who report being a victim or witness to sexual assault in good faith, which encourages survivors to report the incident without receiving displinary action in relation to the incident.

According to Johnston French, the chief justice at Sid Richardson College, the updated FAQs clarify that amnesty can be extended to the Culture of Care violations although it was not explicitly stated in the older FAQ.

“It’s very similar to the alcohol amnesty policy and I’m pretty sure it’s just extending amnesty for alcohol incidents to also apply to the Culture of Care agreement,” French, a junior, said. “And I think that was the plan, I just think that it wasn’t totally clear to a lot of people that was the case.”

Although French and many college leaders did send emails that contained the updated FAQ document, he said some students may not be aware of these clarifications since the Culture of Care amnesty policy was first introduced to new students during Orientation Week.

“I think people could find that information if they wanted to, but that doesn’t mean people are aware of it and communication still might be a problem,” French said. “We talked to the administration asking for a more central document because there has been email updates and stuff but it would be nice if everything is in one place.”

Hays said he knew the amnesty policy applied to alcohol, but not to the Culture of Care.

“I don’t think a lot of people read the Culture of Care agreement as carefully as they should so they have a lot of questions about it,” Puvvala, a sophomore, said.

With the announcement of a partially lifted alcohol ban for undergraduate students, Puvvala said that public health advisors are focusing their attention on educating students about alcohol-related social distancing and explaining how the amnesty policy can be applied to the Culture of Care.

Gorman said the updates in the FAQ were meant to clarify some common misconceptions students have about the Culture of Care.

“They were written in response to questions we had received from students,” Gorman said. “The student presidents led the effort, submitting many of the questions listed in the Culture of Care FAQ.”

Gorman said that all FAQs are living documents that will be added with new questions and updates as needed.

Despite the challenges of keeping up with the live clarifications of the Culture of Care, Hays and Puvvala both said they think the administration has been doing a good job in announcing major policy changes and clarifying common misconceptions surrounding the Culture of Care.

“I think the administration is doing a really good job in doing the best that they can,” Hays said.

Gorman said that the administration will continue to edit the FAQ document to clarify existing regulations, but will use other methods to announce new changes in policies.