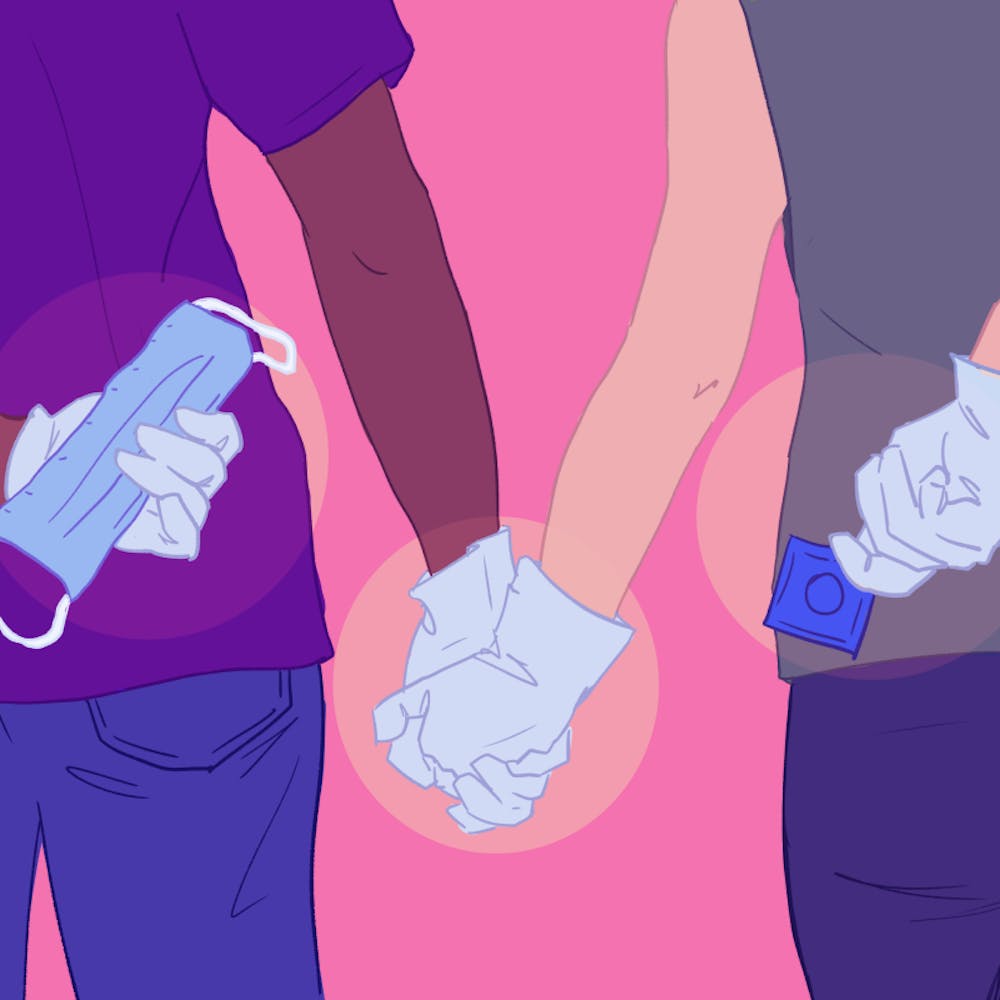 Editor’s note: Students interviewed for this story were given the option of remaining anonymous in the interest of preserving their privacy and preventing disciplinary repercussions. Anonymous students who are referenced multiple times were given false names marked with an asterisk upon first mention.

According to the Culture of Care agreement, Rice students should not be interacting with students outside their “family pod,” which comprises those they live with, without masks or physical distancing. Engaging in sexual acts with other students or those outside the Rice community  increases the likelihood of transmission and spread of coronavirus.

Many students, however, have created their own rules and restrictions regarding sexual encounters. Alex*, a sophomore, said their off-campus apartment made rules regarding sexual acts and who they could engage with.

“For our own mental health reasons we established, as a suite, that we would allow for hook-ups or sexual relations with people inside of Rice’s bubble,” Alex said. “So that means that we couldn’t see people from other universities, like [the] University of Houston, or random people who we know are not getting tested. This way we can still be somewhat safe while having these interactions.”

Alex and another student, Landry*, expressed that their decision to engage in sexual relations was influenced by its affect on their mental health.

“I get a lot of adrenaline and a rush from sex so I didn’t want to lose that,” Landry said. “I feel like it really helps improve my mental health also.”

Landry, who lives on campus, stated that they would also only engage in sexual acts with students who they knew before the pandemic and were comfortable with.

“I stopped having sex with random strangers that I would meet on dating apps, which I did last semester, and now only have sex with people I knew before the pandemic,” Landry said. “These people are getting tested regularly and are ones that I trust to be honest with me about their health and exposure.”

According to another on-campus student Taylor*, continuing sexual behavior on campus has been more difficult than doing so off campus.

“Being on campus has made engaging in sexual acts a lot less frequent,” Taylor, a freshman, said. “Usually both parties are pretty concerned about getting COVID-courted or about other issues that come up with this. So because of that, on-campus interactions are usually not the move — instead it’s been mostly off campus or in a car.”

Drew* said that COVID has mainly affected the way they meet people, moving more towards dating apps, due to limitations in gathering sizes and lack of in-person events.

“Before COVID, I could just go to a public and meet people, but because we don’t have parties or times when you can get drunk and find people you have to be more intentional about your pursuit,” Drew said.

Drew also talked about how the lack of social interaction during this time prompted them to pursue more sexual relationships.

“I feel like not having the interactions with friends and platonic relationships as often, has made me want to pursue those relationships more as a form of intimacy,” Drew said.

Student services, such as Rice Health Advisors and the Rice Women’s Resource Center, are continuing to provide access to sexual health resources, including condoms, lube and pregnancy tests. According to RWRC Co-Director Amy Lin, the choice to continue providing resources was made to encourage safe sex behavior as some students would engage in sexual behavior regardless.

“We are definitely still providing all of our same safe sex resources because that is something really important to us as a center,” Lin, a Hanszen College senior, said. “We also put up a sign that gently reminds people that we still are in a global pandemic, asking them to be mindful when they are using these resources and to think about what are safest ways we can engage in sexual acts without necessarily spreading coronavirus.”

RHAs are also providing the same safe sex resources that they have provided in previous semesters, according to Candi Zhao, head RHA for Jones College. Zhao said she believes it is important for RHAs to continue to provide these resources because there is a chance that students will not comply with Rice’s restrictions.

“My personal belief in why we should continue providing these resources is because even though there are restrictions, people may still go around them and if they do, we want them to be as safe as they can be about it,” Zhao, a Jones College sophomore, said. “Obviously we are not condoning doing these things in an unsafe manner, but we also can’t be idealistic and say that people just aren’t going to do it.”

Rose Click, Hanszen head RHA, said that RHAs are continuing to provide condoms this year with the knowledge that a lack of condoms would not prevent students from having sex against COVID guidelines.

“It is true that normally condoms are one of the biggest mentions of the RHA locker, and we’ve been more reluctant to plug them this year,” Click, a senior, said. “But we were hesitant to discourage people from using the locker supply or to make people feel judged for using it.”

Dr. Kimberly Pilkinton, a practicing obstetrician and gynecologist in the Houston area, said she believes students should still have access to safe sex resources during this time.

“I think most physicians would promote access to safe sex resources whether we are in a pandemic or not,” Pilkinton said. “I think that students should not be putting themselves in other health risks because of the pandemic. We should continue to promote preventative measures especially now when in-person sexual health checkups have been limited.”

Although these resources are available on campus, some students may feel discouraged from accessing them. Alex said they felt uncomfortable with accessing sexual health resources provided on campus, due to the expectations for students during this time.

“Honestly, I would not feel comfortable grabbing condoms from the RHA locker if I needed them, even though I did that a lot as a freshman,” Alex said. “Now, I would be too scared to be COVID-courted or of judgment from people around me.”

The RWRC has noticed a decrease in the need for these resources by other students, according to Lin.

“Our resources have been running out less than previous semesters,” Lin said. “This may be due to a mix of things. There are less students on campus in general and not many people in the RMC, which may be why.”