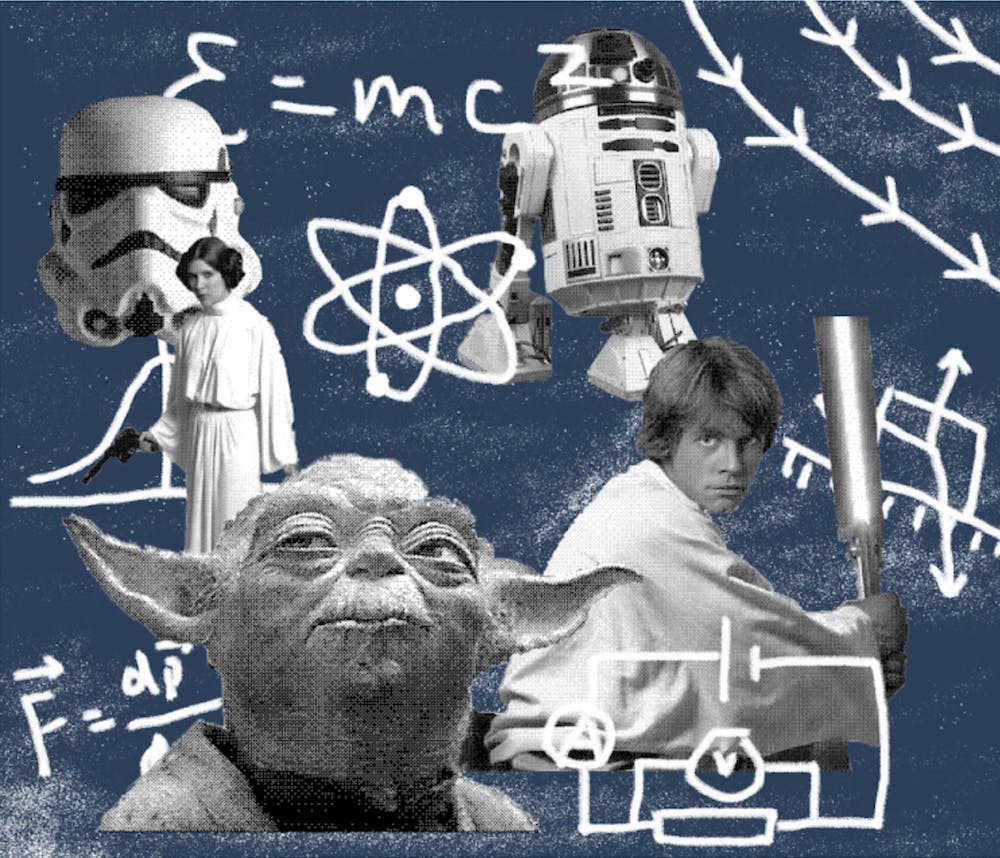 While teaching about projectile motion in PHYS 125 this semester over Zoom, physics Professor Jason Hafner gave students a hypothetical scenario: A hunter is trying to shoot a monkey sitting in a tree. At the sound of the shot, the monkey falls from the tree — will the bullet hit the monkey? When teaching the scenario this semester, Hafner gave it a twist: Instead of teaching completely theoretically, he decided to make it real.

“He got a plushie monkey, put it on a really high pole, and then he had this little machine which worked like a gun, and he put a [piece of] chalk in it. Then when he pushed the button, it would both release the money and the chalk at the same time,” Gulnihal Tomur, a student in the class, said. “You could see if the chalk actually hit the monkey from three different angles –– one of them was slow motion. It was really funny and also kinda fun.”

Tomur, a sophomore at Will Rice College, said that Hafner embeds sound effects, physics memes and even Star Wars theme music while talking about calculus, into the classes.

“When [Hafner is] explaining something, he uses sound effects,” Tomur said. “You know those eye opening moments where you go like ‘ah, that makes sense’? He has [an] ‘ah’ sound effect. He just plays it and it’s so funny. And then he has laugh tracks –– when he makes a joke, he plays a laugh track.”

Classes like PHYS 125 are being held fully online. On the other hand, Lauren Ross, a viola performance major at the Shepherd School of Music, meets her professor for music lessons once a week; they physically distance and wear masks. For music studio classes, all the students who take classes with that professor meet in-person once a week and they perform for each other. According to Ross, one remote student joins the studio classes over Zoom.

Ross, a Will Rice junior, said the biggest change for music students is the lack of an in-person orchestra class. Since it would require a large group of students to sit together in one hall, the orchestra has been canceled and replaced by lecture videos for the foreseeable future.

“A lot of students come here for the orchestra program, so that’s really sad,” Ross said. “Everyone’s disappointed about that.”

Ross meets her quartet for chamber classes at least three times a week. Sitting further apart from her chamber group has been a significant change. Usually, they sit very close together and can hear each other playing their instruments. Now, Ross said they have to be careful about articulation and “listen in a different way”.

“Adjusting to playing with a mask was weird and the first few times I did it, I felt like I was losing a sense, I felt like my hearing was worse [while] wearing a mask,” Ross said. “Once you get used to it, it’s totally fine.”

While Ross plays the viola with a mask on, she said that her friends who play wind and brass instruments have to take their masks off to practice. These students sit even further apart in large halls, and some of them –– like flautists –– play behind plexiglass.

Judith Roof, English professor, is teaching “Modernisms,” a class that covers modernist work, this semester. Her Zoom virtual background is what she describes as a “hideous bust of [Virginia] Woolf in front of her home in Gordon Square.”

Roof, who is holding all classes online this fall, taught a playwriting class last semester, which she said she learnt a lot from as she transitioned it online. She is using similar teaching methods in the two classes she’s teaching this semester –– “Modernisms” and another one on Hollywood cinema.

Roof said that while the classes miss rapid rapport, sideways glances and other markers of physical co-presence, she is impressed by the level of discussion in her classes — whether it’s on the 1932 movie “Grand Hotel,” or a close reading of short passages that students selected from a novella.

“Let’s put it this way. I would prefer to be in person, but this is working,” Roof said.

Roof said she’s noticed that different professors give their students differing expectations for being in online class, leading some students to believe certain rules apply across the board — for example, that they can’t eat and be online at the same time.

“I don’t care if they’re [lying] in bed –– as long as they’re listening, I don’t care,” Roof said. “But they turn their cameras off when they’re hungry, so I always know when they’re eating.”

While according to Roof, the classes that she is teaching are going quite smoothly, architecture classes look vastly different online. Amelyn Ng, a Wortham Fellow at the School of Architecture, said that architecture usually requires very hands-on study, with lots of in-person sharing of screens, models, books and other materials.

“The fact that we’re all in the same room allows for that cross-pollination of ideas, sharing of resources,” Ng said. “So you can imagine how the dual delivery might affect this kind of study collegiality.”

Ng is teaching a sophomore design studio and a senior seminar online this fall. She uses Google Slides for reading discussions. While the class uses Zoom for audio, instead of looking at a grid of faces on Zoom, students open the slides and interact by editing the text real-time.

Ng’s studio group is designing a small performing arts theater in conversation with MECA Houston, a Latino Arts organization. Since the building is currently quite empty, the arts director, Armando Silva, agreed to take the group on a socially-distanced, in-person tour.

Desk critiques and the jury –– a formal review at the middle and end of the semester –– which Ng describes as a crucial part of classes, will also look different this year. Students from different studios usually present their work in front of the whole architecture school and a panel of faculty and external critics.

“It’s a big affair,” Ng said. “And now that will be all online. So it’ll be interesting to see how that plays out.”

Can Erdogan, a Hanszen College sophomore and international student from Turkey, is taking classes online from Iskenderun, a southern coastal town in Turkey. Erdogan said that the time zone difference has been a downside. His chemistry lab ends at 1 a.m. in his local time zone. While he’d usually spend a few hours going over the material again while it’s fresh in his mind, the time zone difference makes this difficult.

“I’ve found myself going to bed at 6 a.m., 7 a.m. That started to become very unhealthy for me. I started getting headaches,” Erdogan said. “I just found that really hard to adapt.”

Erdogan said that despite this, he’s been able to have the same intellectual experience that Rice normally provides students with. In addition to that, getting to spend time with his family has been an unexpected surprise.

“I went to a boarding school in high school and we spent so much time apart for many years,” Erdogan said. “I know that it’s a major global tragedy but being able to [spend] this hard time with your family is a really good thing.”

Erdogan is currently living with his parents, but if circumstances allow, he said he plans to move to Istanbul in a few weeks to conduct medical research, which is only possible because of the flexibility of online classes.