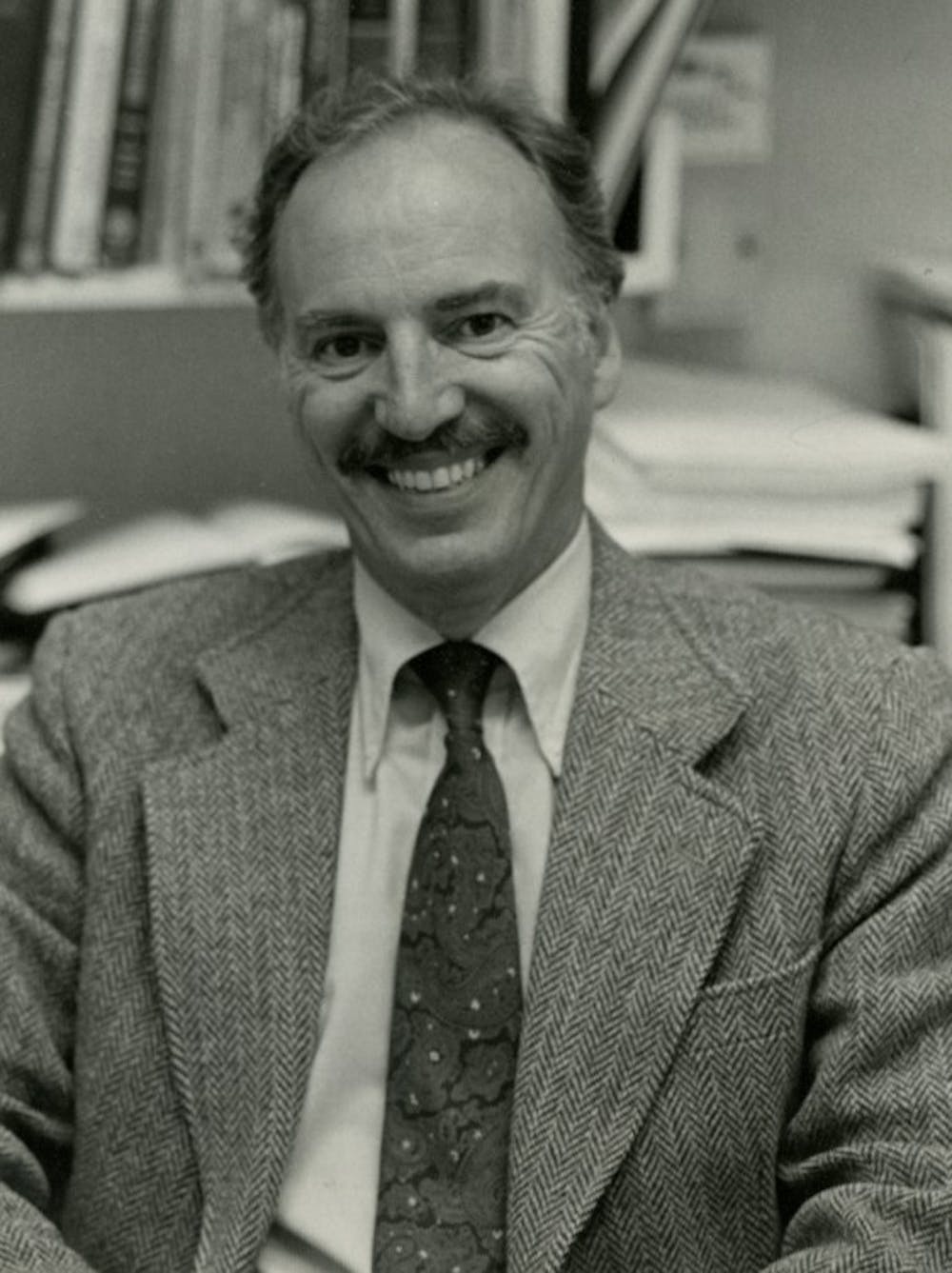 Stebbings and his wife Mona Stebbings, who passed away in 2019, were Jones College magisters from 1977 to 1982, during which time Jones transitioned from an all-female college to a co-ed college. Lynn Elsenhans (Jones College ‘78) said Stebbings was a great listener and provided wise counsel, and had a wonderful sense of humor and a good-hearted full laugh.

“He and Mona were a great team and were wonderful magisters,” Elsenhans said. “They knew how to throw a party but also knew how to be firm-handed when it was needed.”

Umbe Oliveira-Cantú, the department of physics and astronomy operations administrator, said that she has become very close to the Stebbings family over the years and shared lots of moments and conversations with Stebbings.

“One of my fond memories of him is when my supervisor in 1977 asked [Stebbings] how I was doing, as she needed to complete my 90-day probationary period appraisal, and he told her ‘I remember when Umbe started working here, she could not read a word of my writing, but now, she can even read my mind,’ Oliveira-Cantú said. “To me, that meant a lot.”

“He told my supervisor after my son passed away, ‘We are going to pay Umbe all the time she needs to stay home, I don’t want you to dock her pay,’” Oliveira-Cantú said. “He was a great humanitarian and could sense my pain after losing my 4.5-year-old son.”

Alexander Dessler, founding chair of the department of space science at Rice, said that he recruited Stebbings to Rice in 1968 after becoming aware of his research.

“Ron’s work, circa 1960, was admirable, definitive and of basic importance to atomic physics and space science,” Dessler, professor emeritus of space physics and astronomy, said. “It was the department’s and Rice’s good fortune that there was an open faculty position in the space science department and that Ron agreed to accept the position.”

Neal Lane, senior fellow in science and technology policy at the Baker Institute, worked with Stebbings and said he knew who Stebbings was even before meeting him due to Stebbings’ reputation as a leader in the field of atomic physics.

“As a fellow physicist, I benefited personally from Ron’s command of the science and even had the honor of co-authoring papers with him,” Lane said.

Stebbings’ work at Rice focused on atomic, molecular and optical (AMO) physics, and he authored or co-authored over 175 papers.

The processes Stebbings studied at Rice continue to be important in several areas, ranging from astrophysics and stellar atmospheres to aeronomy and planetary atmospheres, according to Barry Dunning, Stebbings’ first graduate student at University College London, where Stebbings worked prior to coming to Rice. Dunning said Stebbings was an important part of the AMO physics research program at Rice, which has since been recognized as a top ten university program in the United States.

“He was a wonderful mentor and teacher and always impressed me with his wisdom and intelligence,” Dunning, a Sam and Helen Worden professor of physics, said. “We collaborated on many experiments until he was ‘seduced by the dark side’ and entered the administration.”

Stebbings became the dean of undergraduates in 1983, and was appointed the university’s first vice president for student affairs in 1984. Stebbings returned to the Department of Physics and Astronomy in 1993 and retired in 1995.

“[Stebbings] was already an experienced leader in the administration, and I was a very green Provost [at the time],” Lane said. “He always was generous with his time and gave me much good advice. And, of course, his humor was legendary. Two of his favorite British comics were Flanders and Swann, who performed as a duo, and I can still hear Ron’s hilarious rendition of the favorite ‘I’m a Gnu!’”

Dunning said that Stebbings was a friend to whom he could turn not just for advice on physics but also on life in general.

“I always enjoyed my interactions with him due to his natural charm, his warm smile, and his wit — the same characteristics that made him such an effective college [magister] and administrator,” said Dunning. “I remember with pleasure many lunchtime discussions with him over [what was] in those days a 59 cent Whopper in the local Whataburger.”

Oliveira-Cantú said after his retirement in 1995, they kept in touch, including calling Stebbings on his birthday or just to say hello.

“Overall, I loved him dearly, I miss him terribly,” Oliveira-Cantú said.

Any correspondence for the Stebbings family can be directed to Martin Stebbings at: 325 Olympic Drive, Rockport, Texas, 78382.