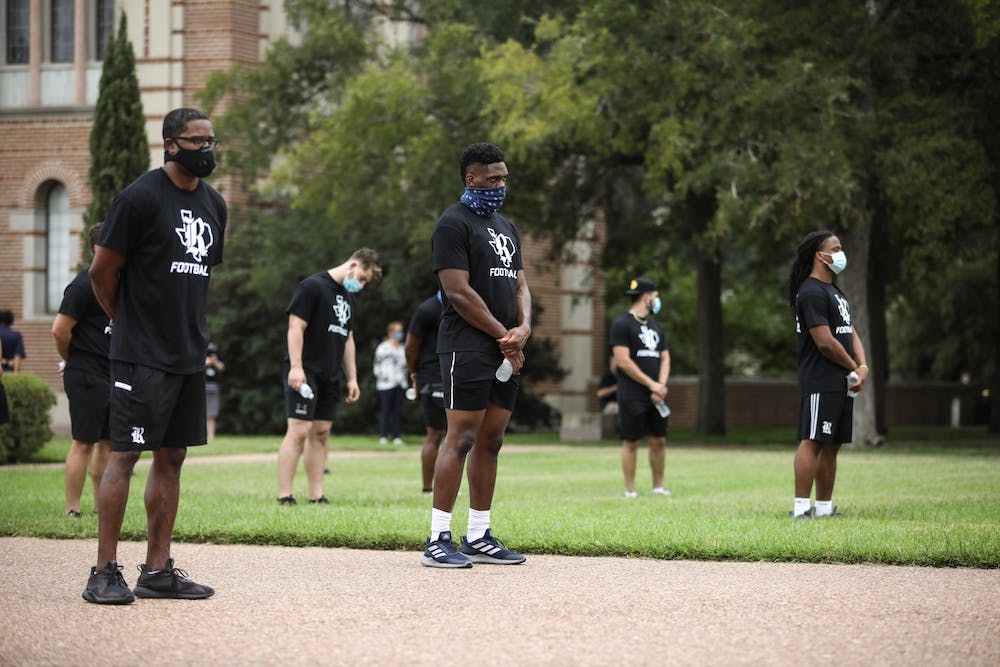 More than 100 players from the Rice football team marched silently from Rice Stadium to the Aacademic Quad to protest racial injustice on Friday afternoon. While roll was not taken, head coach Mike Bloomgren said he believes that every member of the team and the coaching staff was present. Players spoke in the quad about the importance of affecting positive change, before the march concluded with a moment of silence to honor those killed as a result of racial discrimination.

“When I got out there and we were marching in silence, it did something to me,” redshirt sophomore running back Juma Otoviano said. “[We’re] not in this fight alone. We’re fighting for change, and we’re doing it together.”

What the public saw on Friday was the result of months of work done by members of the team, both to organize the march, and to address issues of racial injustice as a whole.

According to Bloomgren, this process began when the team’s leadership council — a group of 12 players representing each position group and class — met to discuss the death of George Floyd, and the protests and dialogue that it had sparked.

“Back in late May and early June, we got together and talked to the leadership council about how we wanted to implement some of the changes [we wanted to see made],” Bloomgren said.

This meeting turned into an ongoing dialogue. Eventually, another leadership council meeting was called in late August, after the shooting of Jacob Blake had led to further discussion and protests.

First, they held a town hall with the entire team to give every member of the team a chance to share their thoughts and feelings regarding these recent events, and racial justice as a whole. Afterward, the team invited Chief Clemente Rodriguez of the Rice University Police Department to talk to the team about what to do when interacting with police officers. Bloomgren said the idea to talk RUPD came from senior safety Naeem Smith.

“They were unbelievable,” Bloomgren said. “[RUPD] talked with our guys about the relationship they want to have with them on campus. And they also said, ‘If you’re in a different community, and you get pulled over, [here] are the steps you should take.’”

Additionally, the team decided to wear Black Lives Matter decals on their helmets for the upcoming season, and to attempt to register each member of the team to vote.

As part of that plan, they also set up Friday’s march through campus in order to raise awareness for issues of racial justice. According to Bloomgren, Otoviano led the effort to organize the march.

“Juma took the lead,” Bloomgren said. “He put in a lot of tireless work for his teammates to make sure this would happen.”

According to Otoviano, before they marched the team held a number of sessions geared towards promoting constructive conversations on race, injustice and other issues that he described as “uncomfortable” but ultimately necessary.

In order to follow COVID-19 protocols, and ensure proper distancing between members of the team, players marched in three separate groups.

Once each group had marched through campus, they met in the Academic Quad, where Otoviano addressed the team, beginning by thanking his teammates, the coaching staff, compliance staff, RUPD and Rice event coordinators. He then opened up the floor to anyone else who wanted to speak.

Redshirt sophomore linebacker Kebreyun Page was the next to speak, and shared a message focused on unity.

“The world needs unity right now, we need to come together as a human race,” Page said. “[My teammates] all know that we’re brothers, and that we always [have] each others’ backs. Some guys may not know the experiences of what some of the other guys are going through, but they took the time out of their day to figure it out.”

Page said that he was inspired by Otoviano’s remarks.

“Seeing Juma up there, it sparked a fire in me,” Page said. “It was this overwhelming feeling, and I had to go follow Juma’s footsteps.”

The next player to speak was redshirt freshman quarterback JoVoni Johnson. According to Johnson, while he did not plan to speak initially, his remarks reflected thoughts that he had been thinking for a long time.

“It wasn’t really planned,” Johnson said of his speech, “but I couldn’t really call it spur of the moment [either], when I got up there and said things that have been on my heart for a long time.”

As for why he decided to speak, Johnson said that the recent incidents of Black people being killed by members of the police have felt personal to him.

Once Johnson finished giving his remarks, Otoviano addressed the team again to end the march. According to Otoviano, this moment gave him a chance to reflect on how momentous the march had been.

“I hope that everyone that marched today felt something,” Otoviano recalls saying as he opened his second set of remarks.

Otoviano said that his message centered on hope and encouragement.

“I wanted to acknowledge that there will be a change,” he said. “And as long as we continue to do our part, we’ll be able to live in the world we seek to live in.”

Following Otoviano’s remarks, and a moment of silence, the march ended.

In a display of unity, the entire team wore identical T-shirts with “Black Lives Matter” printed on the back.

According to Johnson, the unity that the team showed during the march was especially important since issues of racial justice are often politicized.

“That meant a lot,” Page said. “Our staff is unique as it is, we have two African American coordinators on our staff, and I think we’re the only [team] in the FBS with that.”

According to the Chicago Tribune, Rice is the only FBS program that has African Americans in both coordinator spots. Page also said that he credits the staff with building a culture that supports players.

“They’re not just doing this for show,” Page said. “You can feel it’s genuine when your coach pulls you over to the side and asks you, ‘Are you doing okay today?’”

According to Bloomgren, the coaches’ support of the march is a natural extension of the strong relationships that they have built with the players.

“When we see our players hurting, who we think of as family members, we’re gonna help in any way that we can,” Bloomgren said.

While the march marked a significant step in the team’s activism, players understand that it is not the end of their efforts to create change. For their next step, Otoviano said that the leadership council is currently looking at ways to ensure that the entire team is registered to vote.

Johnson, paraphrasing Otoviano, said that the team understands that each of these steps alone will not bring the change that they are aiming for.