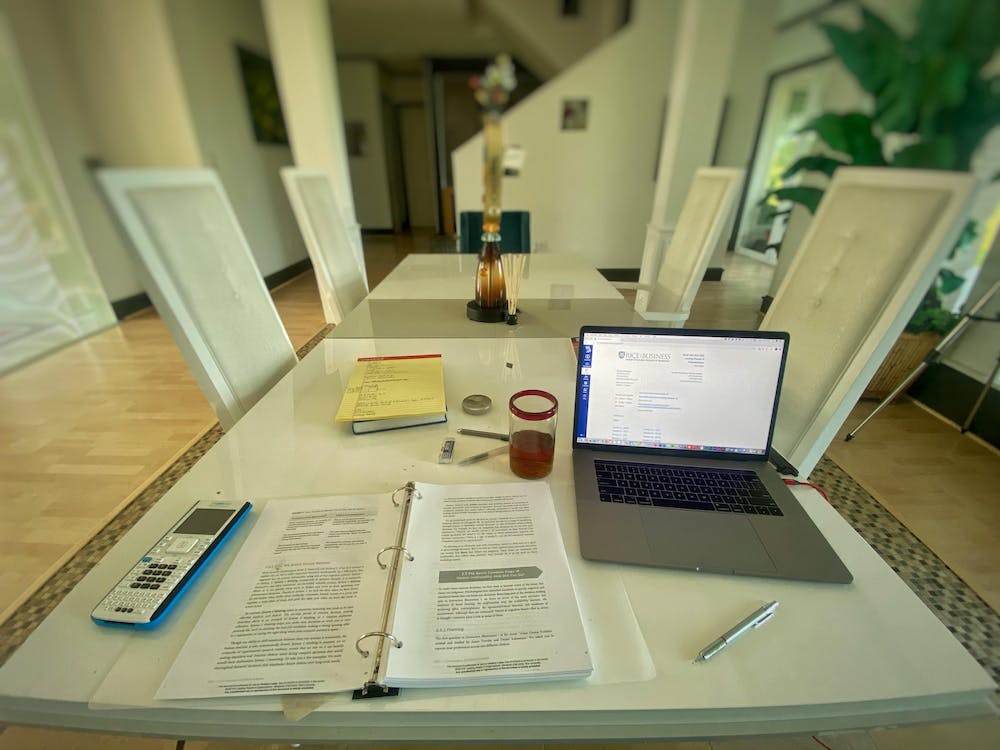 Due to the pandemic, many students are taking classes from home. They’re finding new ways to study and connect with friends. Photo by Cordero Lopez

When Baker College sophomore Ayane Nakajima studies or plays the piano, she sees her neighbors walking their dog, her begonia plant and what she describes as “as much greenery as [New York City] can offer,” she said.

This semester, Nakajima is living at her home in Manhattan with her mother. As a piano major, being away from campus has restricted her performance opportunities, which is an essential part of her major.

“Being isolated from campus has held me up a little in terms of performance opportunities,” Nakajima said. “I feel a constant murmur of anxiety around not ‘doing enough’ or working hard enough, so the imposter syndrome has been setting in more than usual.”

Studying from home has its advantages, though. Nakajima said that she gets to eat home-cooked Japanese food and focus more on practicing.

“I am lucky enough to not have to work to support my family, so I have been able to take time off and seriously focus on practicing,” Nakajima said. “[There’s] no need to wait a million hours for the Baker laundry machine to dry my clothes for the fourth time in a row and I don't feel homesick.”

Cordero Lopez is living at his home in Mission, Texas, a town in the Rio Grande Valley about ten minutes from the Mexican border. Lopez’s favorite part of his fully remote semester, he said, is his mini goldendoodle named Poochy, who is with Lopez for nearly every second of the day.

“Every morning, when I come downstairs, [Poochy] walks up to me and gets on his back in prime position for belly scratches,” Lopez said. “He then follows me to the kitchen where I make my coffee and my breakfast, and once I sit down at my workspace to start classes, he lays down at my feet and stays there throughout all my classes.”

Lopez, a junior at McMurtry College, has been at home for six months already; he credits Poochy for making this time easier than it could have been.

“When I'm feeling happy, he's there to play. When I'm stressing out — which is far more frequent — he's ready to cuddle with me,” Lopez said. “If it weren't for Poochy, I really would be far less mentally stable than I am now.”

Lopez works in his dining room, which he said is his favorite space in the house. He sits at the head of the table, to avoid having sunlight directly in his face while working on his computer.

“I can see most of the art on the first floor from that spot,” Lopez said. “There are windows on both sides of the table, so from sunrise to sunset, there's always natural light coming in, which helps keep me at ease.”

While on campus, Lopez used to study at the Brochstein Pavilion, the Baker Institute for Public Policy and Fondren Library. Before Rice went online in March, he had begun to study at Kraft Hall and McNair Hall too. At home, Lopez only sits in one spot to study, which he said can get repetitive. He also said that running errands for his family can cut into his work time and he doesn’t get much alone time.

“Since I live with my family, I really don't have true privacy at any point of the day,” Lopez said. “I love them and I appreciate their support, but there are occasional times when I just need to be alone.”

Lopez said he misses being in the presence of his friends, which allows for much easier conversations.

“There are several times a week where I wish I could go grab a cup of coffee with them at Audrey's and just talk about whatever was on my mind,” Lopez said. “It's totally possible to talk over FaceTime or Zoom, but being in another person's presence is just so different.”

Being at home has come with its own set of challenges, but it has also allowed Lopez to spend more time playing golf –– something that he said he enjoys but found difficult to organize when he was on campus.

“I can play golf on the weekends, which is my favorite way to have fun,” Lopez said. “I could not do this living on campus without some significant barriers, like finding a ride and coming up with the money to play when I was paying for my own groceries.”

Neha Kalakuntla, a sophomore at Duncan College usually lives in Plano, a suburb of Dallas. This semester, she’s taking remote classes thirty minutes away in an two-story Airbnb in Carrollton, Texas, which she’s rented out with five of her friends from high school.

Her quiet study space is her room, where she works at a small wooden table she brought from Plano. Kalakuntla described her room decor as minimalistic. While she usually works alongside her roommate, the common area downstairs functions as a shared workspace.

“If we go down there, it's more of a coffee shop environment, with people sitting on the sofas in the living room or at the formal dining table,” Kalakuntla said.

Despite enjoying spending time with her friends from high school, Kalakuntla has noticed differences –– it’s been difficult to recreate the spontaneity of meeting friends on campus, she said.

“Whereas in the past I would bump into friends at various spots on campus and be able to chat, everything now has to be scheduled, and everyone's schedules don't always align,” Kalakuntla said. “I love when I do get to speak to friends on campus though and hear about what everyone's up to.”

Kalakuntla lived on campus during her freshman year. Living off campus this year has meant that she’s had to make changes in her schedule.

“I now have to do more housework than I [normally] do during the semester,” Kalakuntla said. “It's been interesting balancing things like cooking, cleaning, and maintaining the house while studying.”

Kaitlyn Wang, a McMurtry senior who is currently living at home with her parents in North Potomac, Maryland, usually studies in an upstairs office space in her house, she said. The upper section of the desk she works at is filled with old books, and she’s added small cards and other artwork in front of it to look at while working.

“It reminds me a bit of my old dorm room from last year, since I was obsessed with hanging up as many pieces of artwork and stickers on my wall as possible,” Wang said.

When she was on campus, Wang would go to Coffeehouse in the afternoon after her last class and pick which servery to eat at with her friends –– these were moments that helped structure the day. Staying on top of classes and creating a structure for the day inside her home has been difficult, Wang said.

“I find myself still forgetting about certain assignments and commitments and getting even more easily distracted than I normally would be if I was on campus, which I didn't even know was possible,” Wang said.

Wang ordinarily tries to eat out a lot in Houston, which wouldn’t have been as feasible had she gone back because of COVID-19. Staying at home has allowed Wang to access her parents’ cooking and focus more on healthier eating habits, she said, instead of relying on food from the servery.

“At home, I can easily eat balanced, healthy meals and get takeout from some of my favorite Maryland restaurants,” Wang said.

At home, Wang has been able to spend time with her friends from high school, who normally she rarely gets to see since they all attend school in different parts of the country and usually spend their summers working.

Wang has weekly Zoom calls with members of her house church, and texts and calls her friends who are in Houston, but she said she’s still aware of the difference between remote interactions and the social interactions normally available on campus.

“It's never the same as actually getting to spend time with them face to face,” Wang said. “I miss the campus feel of being surrounded by college students and seeing a familiar face wherever I go.”