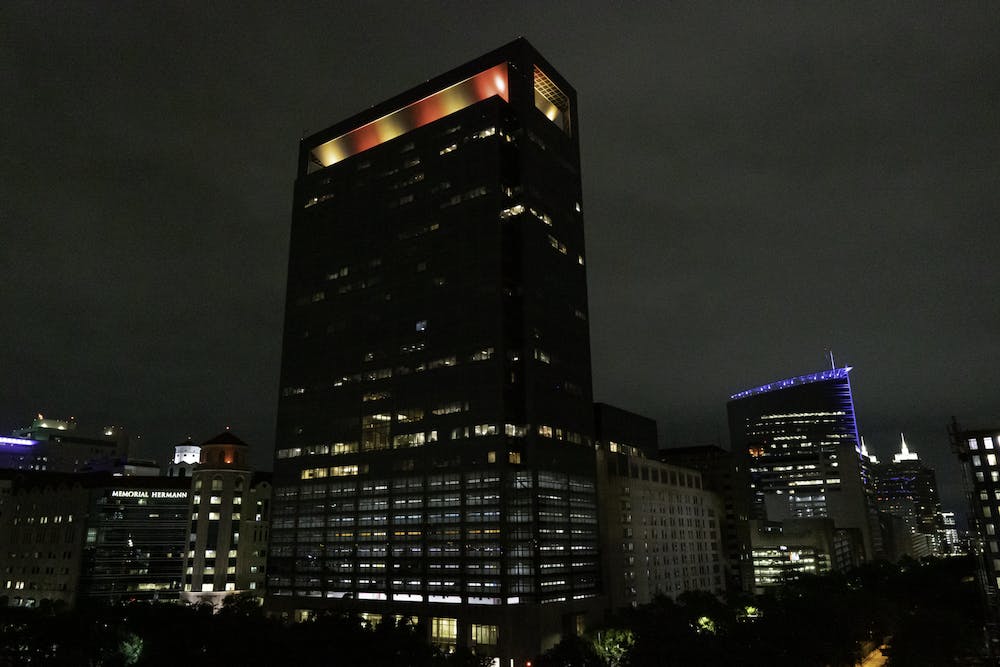 Former Sid Richardson magister and planetary sciences professor Dale Sawyer, who passed away on Sept. 15, was honored this past week with a tribute at the Memorial Hermann Medical Plaza. The building, also known to Rice students as the rainbow building, displayed Sid’s colors of red, black and gold starting on Sept. 22 until the end of last week.

Cin-Ty Lee, chair of the Earth, environmental and planetary sciences department, said that Sawyer was one of the most versatile geophysicists of our time. Sawyer was an expert in marine geophysics, a pioneer in the numerical modeling of crustal deformation and an expert in the acquisition and interpretation of active source seismic profiles.

“I remember him as just a nice and humble person. He seemed to genuinely connect with everyone and I think many people’s lives, including mine, were positively impacted by him,” Lee said.

Sawyer and his wife Elise served as magisters of Sid from 2009-2014. Sid President Nia Prince said that Sawyer played a crucial role in the Sid community.

“The impact of a magister is felt during and even after their term, and we recognize how his work and service to our college has left a legacy for our community today,” Prince and the executive council of Sid said in a statement to the college.

Current Sid Magister Michel Achard said that Sawyer was a beloved magister at Sid and mentored many students over the years.

“It is upon talking with him and his wife Elise when they were magisters at Will Rice [College] that my wife Melanie and I decided to apply for a magister position,” Achard said. “We also very much looked up to them and sought their advice when we became magisters at Jones [College] a few years ago.”

Sawyer and his wife Elise were magisters at Will Rice from 1997-2002. Current Will Rice Magister Matt Bennett said that Sawyer’s passing is a tremendous loss for the Rice community.

“He and his wife, Elise ... served with a dedication to student success and well-being that I strive to emulate,” Bennett said. “Dale was beloved by all who knew him and he will be deeply missed.”

Lee also said that Sawyer was very active in the college system.

“He was a valuable part of our department, and overall the nicest guy you can imagine. Scientifically, he was really quite broad in what he was able to do. There’s a big hole in our department now, not only in terms of a family member, in terms ... of our scientific coverage, for classes and for research,” Lee said. “So, yeah. We miss him.”

In lieu of customary remembrances, the family requests that memorial gifts be made to the Sawyer New Student Award at Will Rice or to the Houston Aphasia Recovery Center: Dale Sawyer Memorial Fund.