Black at Rice: Calista Ukeh throws herself into the Rice community 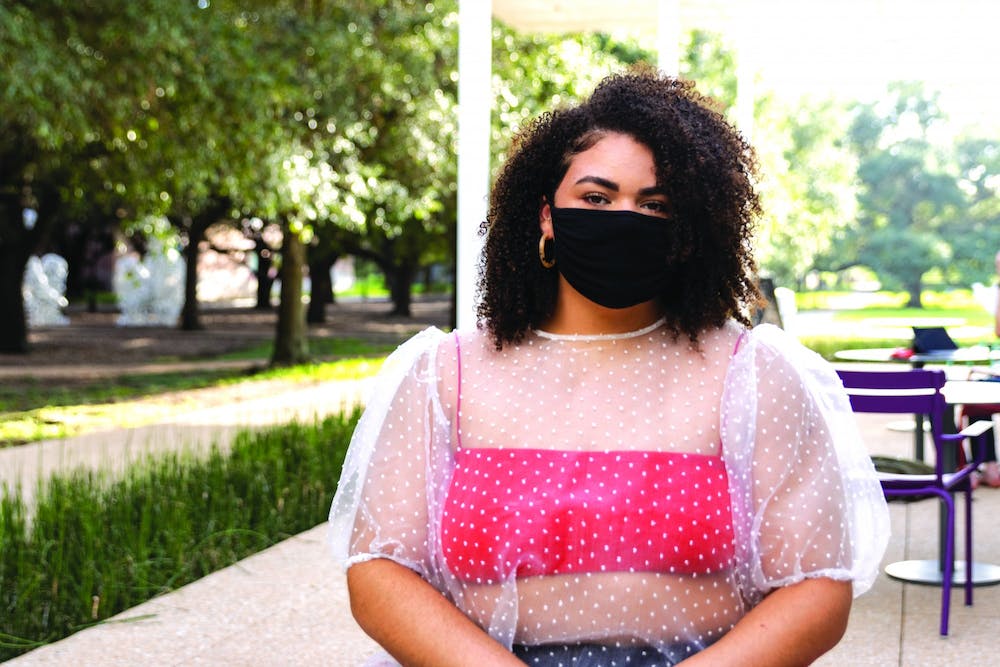 Calista Ukeh, a Baker College junior, is majoring in social policy analysis and double minoring in business and medical humanities. She said she loves how relevant the classes are in the current social and political timeframe. (Channing Wang/Thresher)

Calista Ukeh was in the middle of throwing at a track meet during her senior year of high school when she received her admissions decision from Rice. As far as the throwing went, she was not having a great day — but that changed after she read the acceptance letter.

“I literally saw [the email] right in a crowd of people, by myself, just me and the phone,” Ukeh said. “And right after that I went and threw my personal best. And it was such a funny instance, because no one knew why I was so happy and giddy.”

A few months later, Ukeh would take her event — throwing — to a new field — Rice University’s. Ukeh, a junior at Baker College, grew up in Rockwall, right outside of Dallas. She describes the town as predominantly wealthy, white and Republican. Although her own family was not very affluent, according to Ukeh, her mom “hustled” to make sure she and her two older siblings could attend school in one of the best independent school districts.

“[Having grown up in this community] gives me a lot of experience with how to talk to people from different backgrounds,” Ukeh said. “Especially because so many people in my community that loved me and I loved were part of that demographic.”

Ukeh said that she’d been taught to have a strong work ethic from both sides of her family. Her father, who is originally from Nigeria, moved to the U.S. seeking a better future. Her mother is white and grew up in the U.S. without much money. Ukeh’s mom went back to school when she was 38, which Ukeh said has impacted her perspective of the value of education and has inspired her to want to do better for herself and for her family. Her parents separated when she was very young, which, in conjunction with attending a predominantly white school, affected her racial identity while growing up.

“I have a very interesting relationship with my racial identity [because] I was physically separated from my father,” Ukeh said. “I still have contact [with him] but physically not seeing him all the time and not having the home aspect, I think it really impacted how I saw myself as a biracial female and as especially too as white-passing.”

After Ukeh got accepted at Rice, she said her mom was thrilled, but nervous due to financial concerns that weighed on her mind. In March 2018, before starting her freshman year at Rice, Ukeh had filled out an application for a countywide scholarship in Rockwall, but she never received an invitation to the award ceremony — she said this is probably because the invitation got lost in the mail. She didn’t think that she had won any money, and requested an invitation to the ceremony only because she said she had already told her parents that she would be attending the event. What happened next, Ukeh said, was surreal.

“At the end of the night, I ended up getting $50,000 in [scholarships],” Ukeh said. “It’s just so crazy to me ... My mom was bawling, my whole family was there, I was shaking. I didn’t even think I was going to get anything. Each time they would call me up to the stage, it just felt not real.”

Attending a school whose students predominantly came from two-parent households and lived in two-story houses, Ukeh said that she really wanted that for her own family. Looking back now, Ukeh said that she’s able to appreciate non-materialistic things much more.

“We really do love each other and support each other. I feel like for a long time I didn’t really understand the breadth of what that meant,” Ukeh said. “It makes me really feel like no matter where I am in the world, I can always go to my family.”

Ukeh first heard of Rice through her cousin, who was a thrower on the track and field team at Rice. After researching a bit more, Ukeh visited Rice on three different occasions, and said she felt at home immediately. One thing she noticed on her visits was how willing people at Rice were to help. Now, Ukeh does all she can to make sure that new students, especially new students of color, feel comfortable at Rice.

“I definitely think that I take pride in Rice now because of those moments,” Ukeh said. “I take pride that I get to be able to be a face for people, because I know there’s not a lot of people here that look like me, or that fall into this box, so whenever I do get the chance to direct somebody on campus or do anything in that capacity, I really am passionate about that.”

Another passion of Ukeh’s is bringing attention to the lack of Black faculty at Rice, which was also highlighted in the list of Black student demands published anonymously earlier this summer. In her two years at Rice, she has not had a single class taught by a Black professor.

Ukeh wants to go into hospital administration, and is going to be doing research at the Baylor College of Medicine. She’s involved in Partners in Health, which is an organization that brings attention to global disparities in healthcare and focuses on advocating for healthcare as a human right. Ukeh is majoring in social policy analysis and double minoring in business and medical humanities, and said she loves how relevant the classes are in the current social and political timeframe.

Outside of the classroom, Ukeh has found community in the Rice African Student Association and the Black Student Association. She says the groups have offered a welcoming space from the start where she’s built many friendships. She said she’s inspired by the people she’s met at these organizations, but often feels frustrated by the administration’s response to their advocacy on various issues.

“[It] makes me frustrated whenever I see them advocating so hard and sometimes [the administration] doesn’t always hear that directly, or they almost are tied or bound by alumni and what the alumni will think,” Ukeh said.

Ukeh said that she doesn’t think that discrimation necessarily shows itself in very aggressive and blatant ways, but a lot of incidents of racial discrimination that happen on the Rice campus have come from Rice University Police Department. During her freshman year, Ukeh said she received an email from RUPD. It described a robber on campus as a “Black male with a backpack.”

“That could describe 350 people at our school who go to Rice, and they have just been deemed as a threat to campus,” Ukeh said. “At that moment, every Black male on campus would have been seen as a threat … and that is just unacceptable, to have RUPD send out a description that describes every Black male at Rice.”

Ukeh said that there have been several moments when Black students at Rice are questioned about whether or not they’re a student at Rice. She has personally experienced such a moment as well, when she was having dinner at Martel College.

“I was sitting there, and I had a Rice meal,” Ukeh said. “I look like a Rice student, I have a computer. I’m sitting there, and two [residential associates] from Martel walk up to me and ... they don’t even ask me my name. They’re like ‘Hi, do you go here?’ They were assuming that I would tell them what I’m doing here, like I have to defend myself.”

Ukeh cares a lot about improving her residential college, Baker — she’s been an Orientation Week advisor and is currently the college’s secretary.

“[It’s] just ironic considering we’re the oldest residential college and that [we] were founded by an old white guy,” Ukeh said. “Baker has come a long way, not to say that we don’t have room to grow.”

Ukeh said that her level of involvement in Baker might appear to be in contradiction to the culture around being an athlete at Rice. She’s had this dual perspective throughout her time at Rice so far — she was considered a walk-on to the team and had to go through the admissions process the same way a non-athlete applicant would.

“A lot of times people forget that I’m an athlete. I feel like I’m like a spy, almost,” Ukeh said. “I think I understand both aspects of athletics and student issues.”

In BSA, Ukeh is an athletic liaison — a position that may be added to Baker’s student government as well, according to Ukeh. She said she perceives a very big disconnect between Black athletes and other Black students, but it isn’t a divide that a lot of people are aware of. RASA and BSA have both introduced an athletic liaison position in an effort to increase attendance at club meetings.

“[Student-athletes] still have to go through SAT requirements,” Ukeh said “There’s a stigma around athletes, that they are not as smart, or they don’t deserve space if they are full scholarship. But there are criteria that they have to meet.”

Ukeh said that while the fact that Black students make up a relatively small section of the student population can be difficult, it does make people have conversations that they would not have had otherwise.

She doubts she would have had as many conversations about race and racial identity at a university with a bigger Black population. At the same time, Ukeh said that it isn’t always fair that Black students have to shoulder the burden of facilitating conversations and representing an entire community.

“There’s a fine balance between having to have these extra stresses of being a representation for your group, and also it’s a good opportunity to be able to share your adversities and share your trials and tribulations as a community, and be able to project that and have people listen,” Ukeh said. “I think it’s a balance between knowing when to step away and say okay, I need to focus on myself, and not worry about that as much, and you have to know when to stand up and speak up for your community.”