New traditions: Students get creative with virtual and socially-distanced events this fall 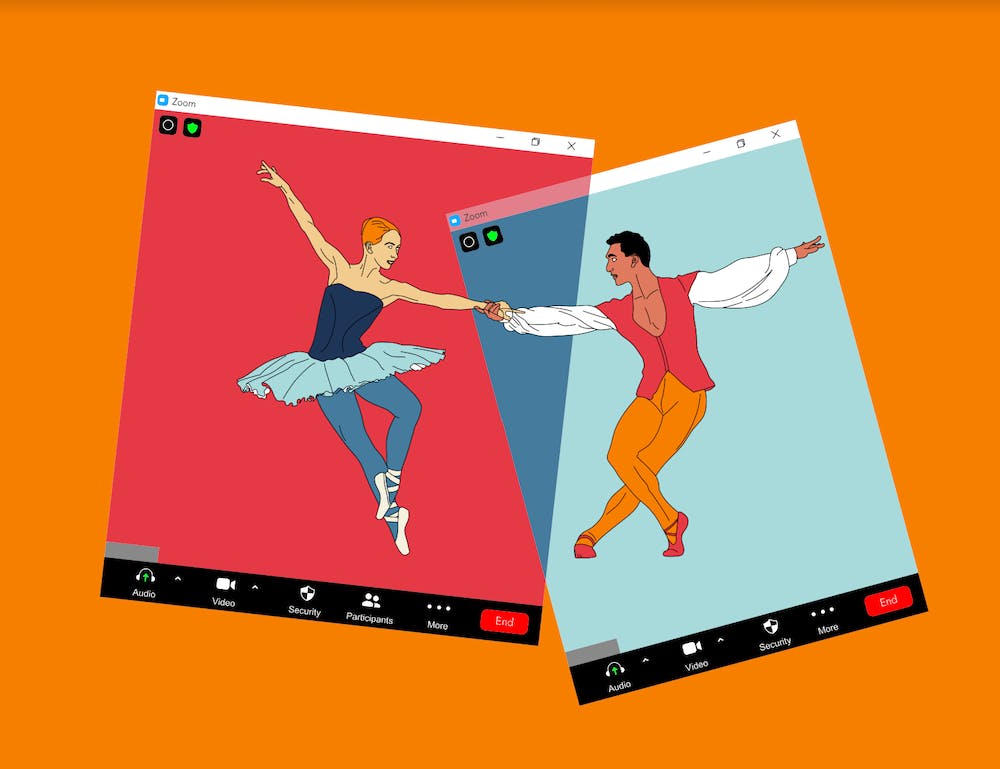 Mask-designing in tents by Rice Program Council, online dance workshops by Rice African Students Association, outdoor movie nights at Jones College and a Bachelor or Bachelorette-style online dating event at McMurtry College are just a handful of the events students are planning for this fall, which will be unlike any other Rice has seen before. With restrictions on social gatherings on campus, student organizers have been brainstorming ways to not just replicate traditional events online, but also introduce entirely new events.

“At McMurtry specifically, we have a lot of spaces that people can be in,” said Saanya Bhargava, a sophomore and one of the External Social Committee heads at McMurtry. “We have our quad, we have our commons, we have fifth floor which is open to only McMurtry students, we have our sand volleyball pits. All are kind of outside or large enough places where people can be separate, so we’re brainstorming ideas of, ‘How can we have like a large group of people, but not all in the same place at the same time?’”

The External Social Committee at McMurtry usually plans large-scale and intercollege events throughout the year, including McWill is Chill, college night and the spring semester public, Y2K. This year, the residential college has implemented a policy of holding at least half the planned events in a hybrid mode, to make them accessible to off-campus as well as remote students.

“We’re not removing anything, we’re just figuring out ways to do them more creatively, in a way that’s still really fun for the student body, because that’s what our committee is all about: to make sure everybody has fun, but also be extremely safe at the same time,” Bhargava said.

The college’s annual McMurtry Cup has traditionally included events such as a Super Smash Bros tournament, a fashion show, floor hockey in the commons and a talent show. The winners get a $500 cash prize that the hall representatives use to plan an event for that hall. According to Bhargava, who is a hall representative, this year’s events will look a little different.

“Maybe something like a field day, where we’re all outside ... as well as video games that we can play online ... Pictionary, [Skribbl.io], Jackbox games … all of those kinds of things to help people compete in a safe way, but also have it be really fun,” Bhargava said. “[We’re] thinking about more outdoor activities, things that are active, since people are sitting in their rooms and not walking around campus going to classes.”

College night this year will be held with a station model. Students will sign up for times that they want to be at the event to minimize the number of people together at the same time and ensure social distancing.

“Traditionally, [college night] is a really fun day for everybody. Last year McMurtry had inflatables … it was a carnival, almost,” Bhargava said. “This year, those things can’t happen, and so we’re trying to figure out ways we can utilize maybe the station model.”

Other ideas the committee is exploring include competing against colleges in online games and having a speed dating event with other colleges, where students go on Zoom and talk to people across campus. According to Bhargava, the committee is considering holding “an actual Bachelor, Bachelorette that [they would] film” of students going on dates.

“We know that the Rice population, they’re big Bachelor and Bachelorette fans, so we’re like, maybe that could be a good idea,” Bhargava said.

Christi Nguyen, a social coordinator at Jones College, said that the goal at Jones is to create and hold new events instead of trying to recreate the usual traditions online. To avoid losing the tradition altogether, they plan to use the same names for events.

“With our public, last year and the last couple of years we’ve rebranded with Inferno. So this year we’re going to call it Infer-‘no.’ There’s ‘no’ drinking, ‘no’ gathering,” Nguyen said. “There’s no way we’re going to recreate a public that’s just as good, so we’re going to just try to create the best virtual thing from it.”

Nguyen said that a Shark Tank activity was held during Orientation Week, where new students pitched new Jones traditions and got a chance to receive funding from the Socials Committee.

“The students suggested Family Feud, where we can have actual Jones people do the surveys and then ‘survey says’ and that kind of thing,’ Nguyen said. “The new students also suggested surprise slides, which is actually fun. Basically, a group would make a PowerPoint slide on something controversial … a lot of them have been on the ‘Bee Movie’, or Sven from ‘Frozen’ or something. And with no context, the next group will have to present it.”

According to Nguyen, Jones is also considering setting up a 20-foot inflatable projector screen outdoors to hold movie nights, which they’re going to call “CineJones Theaters”. While students on campus would attend in person, remote and off-campus students could also join them over Zoom.

College social teams aren’t the only ones responsible for social events in the fall. Large-scale events such as Screw-yer-roommate and Esperanza are usually organized by RPC.

“It’s not going to look the same as it has in previous years,” Samantha McClendon, Martel College senior and president of RPC, said. “Socials Committee, that puts on Esperanza, will still be doing some event that fulfills the purpose of socialization and meeting people across campus, in place of a large Esperanza event.”

According to Divya Jain, Will Rice College junior and internal vice president of RPC, late night events, where they offer substance free programming, will still take place this year. In-person as well as socially distanced events will be offered, following guidelines set out by Rice Crisis Management and the Centers for Disease Control and Prevention.

“Some of our events like Welcome Back Day, for example, we are doing both components: in person and online,” Jain said. “[On Aug. 22] we had the first portion, which was an online virtual escape room. On [Aug. 27], we’re having the in-person component, where we’re going to be using the outdoor tents and we’re going to have a socially distanced DIY, designing your own masks.”

Magdah Omer, Baker College junior and the event coordinator for RASA, said that the two major events the organization holds during a typical year are Africayé and Taste of Africa.

“I plan Africayé, which is our big cultural showcase in the spring, and then in the fall, it’s the Taste of Africa festival, which in the past was like a music festival, and now it’s more focused around food and trivia,” Omer said.

Around 150 to 200 students usually attend Taste of Africa, according to Omer, which is held outdoors. This year, the event has been moved entirely online.

According to Omer, dance workshops, which are usually held at the in-person event, will be held over Zoom. When it comes to food, RASA has come up with a unique alternative. People attending the event will be given little bags with gift cards from African restaurants around Houston –– this not only minimizes in-person contact and food waste, but also helps reach off-campus and remote students.

Although plans for the spring semester are uncertain, Omer said that RASA is considering a modified in-person event for Africayé. Instead of holding the event with full seating, the performances would be recorded beforehand. Students would walk through the Rice Memorial Center Grand Hall on the day of the event to watch the recordings.

“Africayé has a lot of energy and that’s what the show is about –– the energy and celebration,” Omer said. “We want freshmen and RASA members to be able to be in that energy and contribute to it.”

RASA is just one of various cultural organizations on campus that have had to adjust their fall traditions. According to Vyshnavi Gade, a sophomore at Jones and co-event coordinator for South Asian Society, the first event of the fall semester is usually the mango lassi social, where attendees play icebreakers while listening to music and drinking lassi. The plan this fall is to try to incorporate most the events SAS usually holds but with modifications, including a remote component to most activities.

Dhamaka, which is usually SAS’s biggest event of the year, is held in the RMC Grand Hall in October and is attended by up to 800 people, Gade says. The event is followed by dinner at the RMC. Other events include a Garba party, which was held at the University of Houston last year, and celebrations for the festival of Diwali.

“Last year we held [Diwali celebrations] in the Baker pit, where everyone showed up, we had music going on, and then people were lighting sparklers, chit-chatting … and when we’re doing that we’re all around that one fire area, so that’s totally not social distancing,” Gade said. “We’ve taken into consideration a lot of these typical aspects that we take for granted in events, and now we’re trying to restructure everything so that we follow all the CDC guidelines and also all the guidelines that the university is enforcing.”

The group’s ideas for new activities include creating Spotify playlists for members, which can be used for events to be held in the future, and cooking playlists on YouTube for interested students.

“Over the summer, we had a Zoom cooking tutorial for biryani, and we also had a ‘Never Have I Ever’ study break, where people were able to join the Netflix party and watch the show together,” Gade said. “We might try to incorporate that again for the fall.”

The Hispanic Association for Cultural Enrichment at Rice is another organization that plans several cultural and social activities for its members as well as for the entire Rice community. According to Makayla Franco, the social events chair of HACER, events held in the fall typically include a new student retreat called Nuestras Raices, events for Hispanic Heritage Month and Ritmo, the cultural showcase. This semester, HACER is holding a trivia night with Society of Latino Alumni of Rice that will be fully on Zoom, for Hispanic Heritage Month.

“We hope to have something for Hispanic Heritage Month in person and socially distanced,” Franco, a junior at Hanszen College, said. “The biggest obstacle has been inclusion and safety but there are some forms of programming for the month such as community speakers that allow for an in-person audience as well as virtual attendance. There is usually a kickoff dinner for the month as well so we are modifying that to still happen in some capacity in person.”

Over the summer, committees at cultural clubs and colleges have been planning events via Zoom. Franco said that even though the process has been stressful, communication regarding expectations and possibilities for events have become clearer as campus reopened.

“The stress of planning things via Zoom during a pandemic is never fun, but there has been a surprisingly positive and collaborative energy going into the planning,” Franco said. “Everybody really wants to maintain a sense of normalcy, so we are all going out of the way to ensure the connections and experiences that come from these events are maintained.”