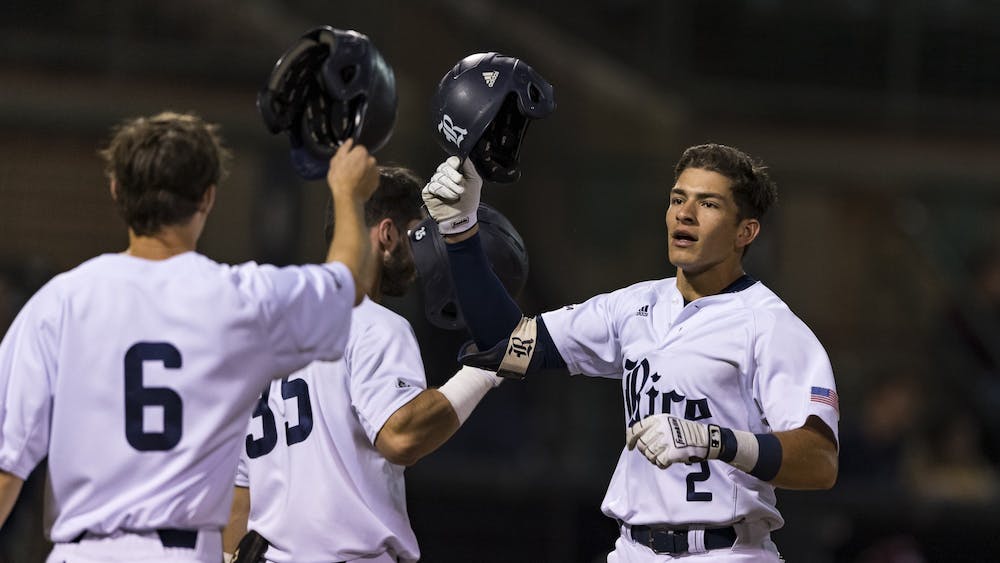 February 28, 2020: during a game one of the series between the Missouri State Bears and the Rice Owls at Reckling Park in Houston, Texas. (Mandatory Credit: Maria Lysaker | Rice Athletics)

“I felt like I was still in a dream when my name was called. There was obviously a lot of screaming, Puerto Ricans are loud; it was a little hard to hear myself think,” Cruz said with a laugh.

With the first pick in the third round, the 73rd pick overall, the Tigers made Cruz just the second Owl to be drafted over the last three seasons. He is also the first position player to be drafted out of Rice since Anthony Rendon, who finished 3rd in National League MVP voting in 2019, was drafted in the first round of the 2011 draft.

Cruz says that the Tigers had been reaching out to him since last year, and expressed a lot of interest in his game. As Cruz put it, “they want me to be their guy.”

Cruz is following in the footsteps of his father and grandfather, both of whom had illustrious careers in the MLB. His grandfather, José Cruz, spent 19 years playing in the MLB, mostly with the Houston Astros. His father, José Cruz Jr., was a starting outfielder on Rice’s baseball team in the 1990s and played for nine different MLB teams over his 12-year career.

“I’m blessed to have [my family] in my corner,” Cruz said. “They’ve taught me a lot, and I’m excited to rep their name.”

Standing in his bedroom, with his walls lined with old jerseys of his grandfather and father, it is evident that Cruz knows both what is in store for him and what it means to be a part of this family.

Specifically, Cruz acknowledged that spending time in the minor leagues will be difficult. The minor leagues are known for their low salaries, cheap motels and long bus rides.

“I’ve been learning about the minor league grind since I first stepped on a field,” Cruz said. “My dad and my grandpa always tell me about how it’s a different grind. My grandpa grew up on the worst fields in Puerto Rico, and he tells me that the minor league fields now are better than the major league fields he played on. I know that it’s going to be a grind, but at the end of the day I just have to work hard and show the Tigers that I’m ready.”

Cruz will leave behind an impressive resume at Rice. In 131 career games, he hit .296 with 150 hits and 97 RBIs. Along with his solid bat, Cruz performed well in the field with a .941 fielding percentage.

In the 15 games that the Owls were able to play this spring, Cruz posted a .333 batting average with 18 hits in 54 at-bats. Opposing pitchers were wary of Cruz, as they walked him 18 times; averaging more than one walk per game.

Rice head coach Matt Bragga had nothing but kind words to say about Cruz and his work ethic.

“Not only is he a talented ballplayer and an incredible young man, but Trei has been dealing with pressure his entire life, because of whose grandson he is and whose son he is. That’s one of the main reasons I think he’ll climb the ladder very quickly,” Bragga said.

There is some question of where Cruz will find his future position at the major league level. Scouts have expressed worry that his average arm and range won’t lend themselves well to playing at shortstop. There is a chance that he will transition to second base, where he played his freshman year at Rice.

“I’m open to anything, but I definitely believe that I can play shortstop at the highest level,

Cruz said. “The Tigers think so too, and that’s where I’m aiming to be.”

As Cruz gets ready to take the next step in his ultimate goal of reaching the major leagues, he paused to reflect on what he hopes to gain from the experience.

“I remind myself why I’m playing baseball. I’m not playing to follow in my dad’s footsteps or grandpa’s footsteps, but I’m trying to play because I’m trying to write my own story,” Cruz said.