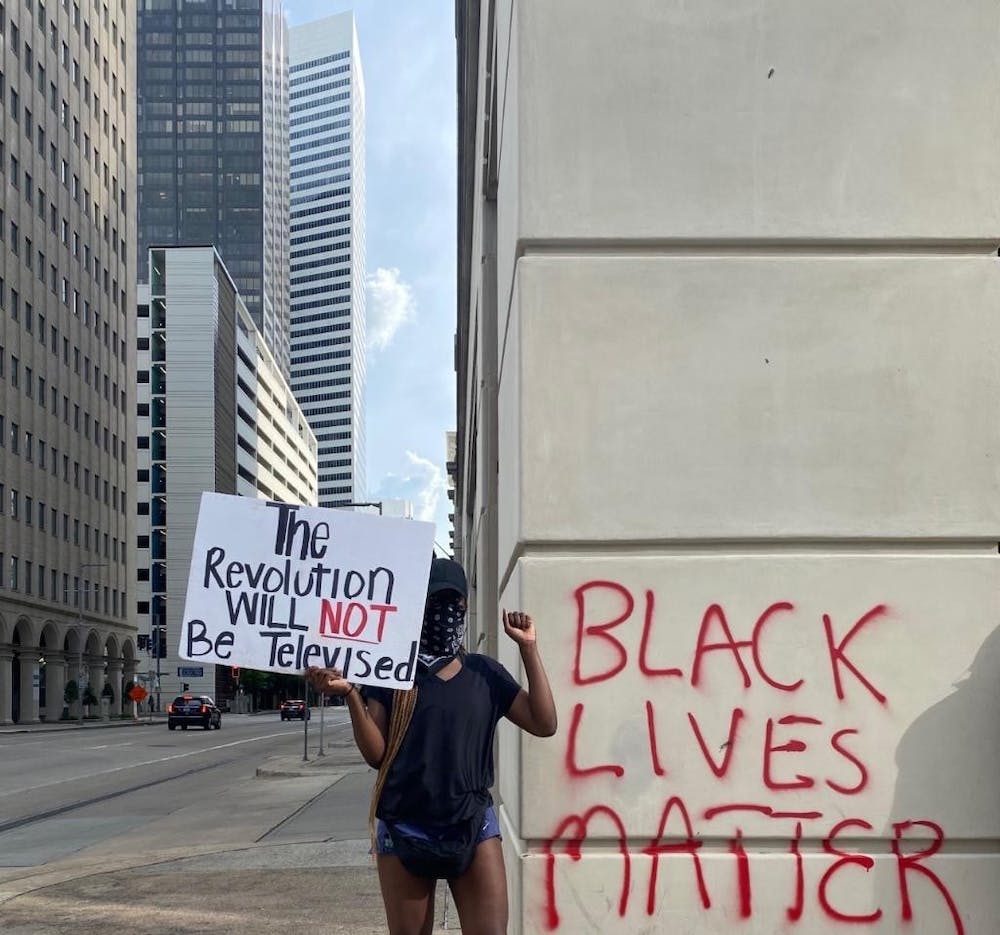 Content warning: This article references anti-Black violence and police brutality. The 24/7 wellbeing hotline number is 713-348-3311, and here are lessons and resources from Black Lives Matter.

Usually, Black at Rice is a celebration — a celebration of an individual student and their story. Today’s installment is not. Instead, we asked Black students if they wanted to respond to the countless instances of racist violence against Black Americans, and the protests taking place across the country as a result. Here’s what they said.

“I should feel as though the institution I go to is as traumatized and angry as I am about anti-Black violence and police brutality. I can’t definitively say that at the moment.” — Temi Alao, McMurtry College ’20

“As a Black person of faith, I’ve been trying to cope with the situation through learning how to mourn/lament for all impacted and be in support of the road to justice. Also, I am becoming increasingly aware of the troubles that face me in my encounters with society. Recently in my hometown, a police officer was shot by a Black man, and this unfortunate event coupled with racism becoming more public everyday worries me and my family. Midnight drives don’t feel as safe anymore, as with other encounters. At the same time, I find myself needing to limit the amount of time I spend on social media. As the racism in our society becomes more publicly broadcasted, the influx of news over time can lead to a desensitization of Black oppression in our society. It becomes ever more important to find ways to act and avoid subtle apathy. As far as it goes for Rice, we need Black faculty and Black students in discussions with [Rice University Police Department and Houston Police Department]. I know that the University of Minnesota is limiting its involvement of the police to a minimum, and while I don’t know what the best plan of action is, I know it is important to increase the agency of the Black student body regarding these issues.” — Rapha Onyeka, Baker College junior

“To allies and non-Black populations: make sure your outrage does not end when the news cycle does. You may be able to close your minds and hearts to the realities of injustice, but the rest of us must revolve our lives around it. The fact that some of you may be able to post or tweet about things that do not revolve around what is happening in our country already highlights how you are able to compartmentalize race, gender, sexuality and violence within your own life. Some of us wish we had that privilege.” — Gabby Falcon, Martel College ’20

“I’m numb. All I could think about was when a friend of mine really sat me down and said that there isn’t any difference in how law enforcement treats Black people versus the rest of America. He told me police brutality is something that happens a lot and that sometimes it’s because Black people tend to be more aggressive with the cops. That hurt me so much then and that’s all I could think about today. The numbness is taking over as I type and I’m fighting it to continue but it’s making me lose my train of thought as if to invalidate my feelings. How can someone who in my eyes is one of the kindest people I know sit there and say that? It scares me to say that he is among the masses in our coveted little bubble at Rice. Someone once said that Rice is handicapping because the culture of care we claim to possess is simply for show and in no way is it preparing us for the hell waiting for us outside the hedges.” — Mathias Adamu, Brown College senior

"It feels like we’re mourning all the time. As soon as I was able to mourn Ahmaud Arbery, my heart broke all over again at the blatant dehumanization and disregard for George Floyd’s life. We’ve had to deal with so many deaths across the nation and this last one simply feels like too much to bear." — Camille Pierre-Louis, Hanszen College senior

“Real change comes from working to obtain actual results. People need to realize that simply reposting a picture on your story isn’t going to help end racism. Calling yourself an ally and running a mile in support of the Black community might make you feel better about yourself, but what is it actually doing for us? These gestures, while seemingly benevolent in nature, aren’t going to make me or any of your Black peers feel any safer when encountering the police or experiencing a racist encounter. Many people are using their social media to fuel their self-validation. They are claiming that they finally ‘get it’ because they saw the video of George Floyd and agreed that it was ‘bad.’ They are deciding to take a stand against racism and police brutality despite this issue being present for years. If you really want to support your Black peers, begin by educating yourself. Fall on your sword and acknowledge that as a non-Black individual, you can never fully understand our experiences and our fears that we face on a daily basis. Reach out to your Black peers. They are scared, and they are hurting. Ask them about their experiences and try to develop an understanding of what they go through and how you can support them. Join us in protesting systemic racism and inconsequential police brutality. If you can’t join in the protests, then support the people who are by donating to the organizations who are protesting as well as the bail funds for arrested protesters. Finally, encourage your silent non-Black peers to speak up. A lot of the members of other non-Black communities are choosing to remain silent. Reach out to them and help them understand why their silence is unacceptable during these times.”  — Jared Lyons, Will Rice College senior

“It has been really hard to find the words to explain all that I have felt these past couple of weeks. The violence and brutality against Black bodies is something that has been pervasive in this country for the past 400 years. It is saddening, disgusting, frustrating and quite frankly, infuriating. If you aren’t infuriated too, then you must be choosing to blind yourself to the injustices and inequities of this nation. As somebody who is mixed, I understand my privileges. I know that when I go out into the world, I am not seen as a Black body. I am not seen as a threat. However, my grandfather was. My dad is. My uncles and aunts are. My cousins are. Black lives matter, and not just because you have a friend who is Black or because you have a Black family member, but because Black people are worthy of living full lives. Black children are worthy of growing up with both parents, without one being murdered or incarcerated because of the color of their skin. Black children are worthy of the same education, the same opportunities, the same successes and the same joys as anybody else. With this being said, I encourage anyone who is as distraught as I am to use their voice in whatever way they see fit. I will not and cannot denounce violence, when every other option is ignored or belittled.” — Emani Brown, Jones College senior

“I have always been afraid of death. While its inevitability is inescapable, its ability to occur prematurely and indiscriminately is what truly instills fear within me. Premature deaths leave a hanging sentence; a placement of ellipsis on what could have been.

Living while Black in this country is a death sentence. It always has been, and for the foreseeable future, will be. The real surprise that the rioting and public outrage that is occurring both in the streets and across social media platforms is the surprise that non-Black people have about Black people’s daily reality. Public delegitimization and condemnation of racism does not mean that it magically disappeared. I live in a state that allowed the [Ku Klux Klan] to march up and down the streets of our downtown shopping areas, yet non-Black people ask why we are so up in arms about the blatant genocide that is occurring in our country.

Last year, I was driving home from my friend’s house at about two in the morning. He lives in a pretty nice area, and there was no one on the road at the time. I turned right at a red light, which is legal in my state, and suddenly I see the flashing lights of two squad cars behind me. It was my worst nightmare. Nobody around. Stopped in the middle of the night with nobody but me and the police officers there. The only thing playing in my head was the video of Philando Castile, who was gunned down in front of his wife and his child. Surely, I thought, if they could kill him in that situation, then I, who was alone, would be easy to dispose of.

Some readers may wonder, ‘What does he have to be scared of, it is just a routine traffic stop?’ This is exactly what I am scared of. What happens if I move too fast in reaching for my insurance card and driver’s license? I watched a man of my skin color get shot multiple times for that offense, because the police believed he was reaching for a gun. What happens if I move too slowly in reaching for my driver’s license and insurance card? Again, I can be seen as reaching for a weapon, or even worse in their eyes, refusing to comply. The punishment for refusing to comply is also death.

In the brief moments that I heard the policeman walk to my car, I fervently prayed. For forgiveness, for my family, for my friends, and for my soul. After the prayer, I resigned myself and accepted death at that moment. I tried not to look nervous, but my heart was beating through my ribcage. The thoughts piled through my mind. What if I die right now. Will I have accomplished everything that I wanted to? What will happen to my brother? My parents? Did I do everything right in this life?

It is for this reason that people march the streets today. I have had it good. I know people who have been stopped and frisked. I have seen the faces of those brutalized by the police in their communities. While the slogan of the police in America is to Protect and Serve, we in the Black community know that they do not protect and serve people; rather, the police protect social order and serve the upholding of that social order, regardless of the human costs associated with it. The nation has seen in plain view that to the police, Black lives are expendable. The police believe that they are both judge and jury, when in reality they are supposed to function as the intermediary of justice, identifying possible perpetrators of crime on a foundation of considerable evidence and then transporting those possible perpetrators to those whose duty is to determine guilt or innocence. Police reform cannot occur if the police still have the license to kill freely.”