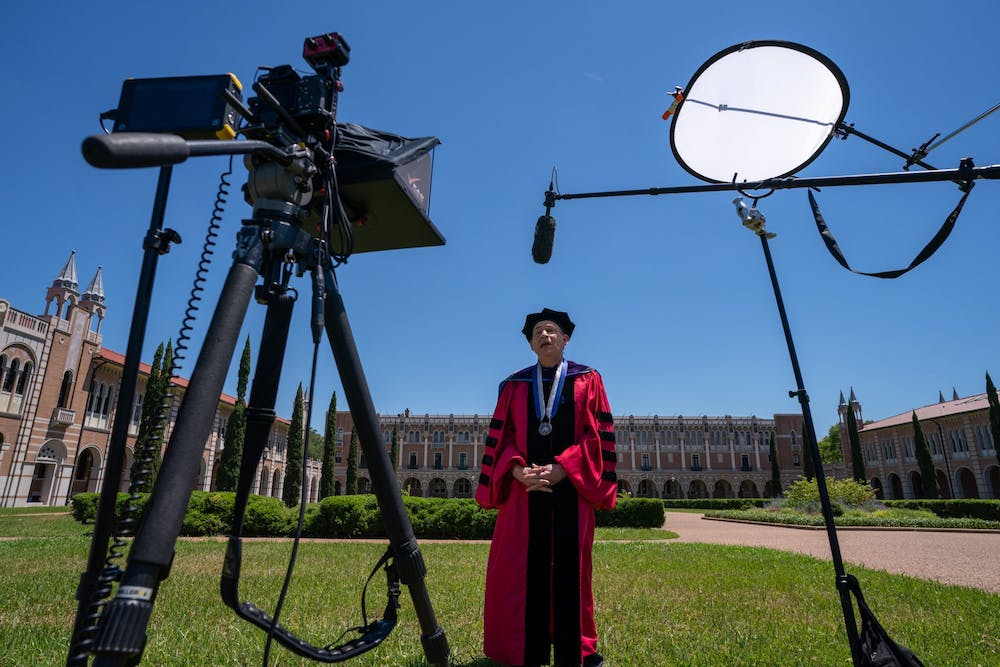 Brandon Martin, manager of videography at Rice, filmed and edited the various videos featured in the ceremony. President David Leebron conferred the degrees, after giving his own address to the graduates during the ceremony. Courtesy Brandon Martin.

With an in-person graduation ceremony indefinitely postponed, the class of 2020 was presented in a virtual commencement ceremony, livestreamed yesterday on the university’s YouTube and Facebook page. The undergraduate ceremony included footage of students and campus, messages from various community members and a reading of all the graduating seniors’ names.

There were three pre-recorded videos, for the advanced degrees ceremony, the doctoral ceremony and the undergraduate ceremony. The video for undergraduates opened with words from Duncan College graduate Shree Kale, who spoke about his time at Rice and a series of uncertainties he has faced, along with others from the class of 2020. Kale recounted his first visit to Rice during an admitted students day in April, in the midst of a massive rainstorm.

“Even in the middle of a storm, the students held on to a welcoming attitude, showed me around and encouraged me to come to Rice,” Kale said.

Kale reflected on his experiences from Hurricane Harvey, which occurred during the graduating class’s sophomore year. He said that students at the time came together to serve the community during then-unusual times. In light of the COVID-19 pandemic and cancellation of the in-person graduation, Kale said the Rice community once again came together to offer any form of aid they could.

“We knew we would have a support system regardless of what was going to happen,” Kale said. “These moments were filled with anger, fear, sadness and anxiety. But we always persisted.”

Kale said he felt honored to be a part of the commencement video.

“When I wrote the speech, it was in a moment of extreme nostalgia and looking back at some major moments for me. I hope some of those [moments] were relatable for people and that they could feel some level of closure before facing the real world,” Kale said. “Rice Media and the commencement team did a great job considering the circumstances to make the day as special as it could be.”

In founding order, each magister read out the names of their college’s degree candidates, while the students’ pictures and degrees appeared on the screen simultaneously. After all the names were read, a moment of silence was held for Andrew Manias, a student who would have graduated with other Martel College seniors but passed away this February after contracting pneumonia.

Brandon Martin, manager of videography at Rice, was responsible for filming and editing the various videos featured in the ceremony. Along with the commencement planning group, Martin said he started this effort on April 15, which gave them a month to plan and put everything together.

“The filming process was coordinated with deans, magisters, students and President Leebron over two weeks,” Martin said. “Then editing consumed my days and nights. I looked for shots of people graduating from the [undergraduate] and [graduate] class of 2020 to use in the videos.  That was wild.”

Martin said he didn’t mind doing all this work in order to give the class of 2020 a memorable celebration.

“It was a crazy process, but I loved doing it because I was motivated to create something special for the students,” Martin said. “So many students in the footage, graduate and undergraduate, are people I have met over their time at Rice and it means a lot to represent them. My favorite part was helping Shree Kale turn a student-speech submission into a pretty powerful video.”

Kale said the online ceremony had some benefits including the ability for friends and family around the world to watch simultaneously, but ultimately there was a greater feeling of missing out.

“The many clips of previous graduations left a sense of loss for the end of our senior year and the spectacles that we would have had,” Kale said. “We are definitely eagerly awaiting our opportunity to have one in person.”

President David Leebron conferred the degrees, after giving his own address to the graduates.

“These commencement exercises are different than the 106 that preceded them,” Leebron said. “We know that the absence of friends and family, and being away from the campus that you love cannot help but bring a tinge of sadness to what ought to be a joyous celebration of your accomplishments.”

Leebron compared this current situation to circumstances in 1918, with the threat of the Spanish flu epidemic as well as the ongoing World War I looming over students, staff and faculty at the time.

“Even as a brand new university just six years old, Rice rose to the occasion and offered its support,” Leebron said. “Commencement was held early so that members from all these groups could serve in the war. Rice and its community not only survived the Spanish flu and the war, but emerged a stronger university.”

Dean of Undergraduates Bridget Gorman addressed the graduating class and their journey through unexpected circumstances.

“I’ll admit, a predictable end to the year is all I wanted for each of you,” Gorman said. “But please know this, despite the sudden shift in how your final semester has gone, none of this diminishes how all of us at Rice feel about you and your class – you are amazing, you inspire us.”

Lesa Tran, Rice alumna (Sid Richardson College ’07) and lecturer, gave a congratulatory message to the graduates, along with the many other faculty members featured in the ceremony.

“I’ve had the privilege to teach and know many of you over the years, but as a Rice graduate myself, I now have the greater honor of calling all of you my fellow alumni,” Tran said.

In a March email to Rice students and families, Leebron said an in-person ceremony will still be held as soon as possible.

“As soon as this public health crisis has passed, we will announce and begin preparing for an on campus ceremony in our central quad to celebrate our Spring 2020 graduates,” Leebron wrote.