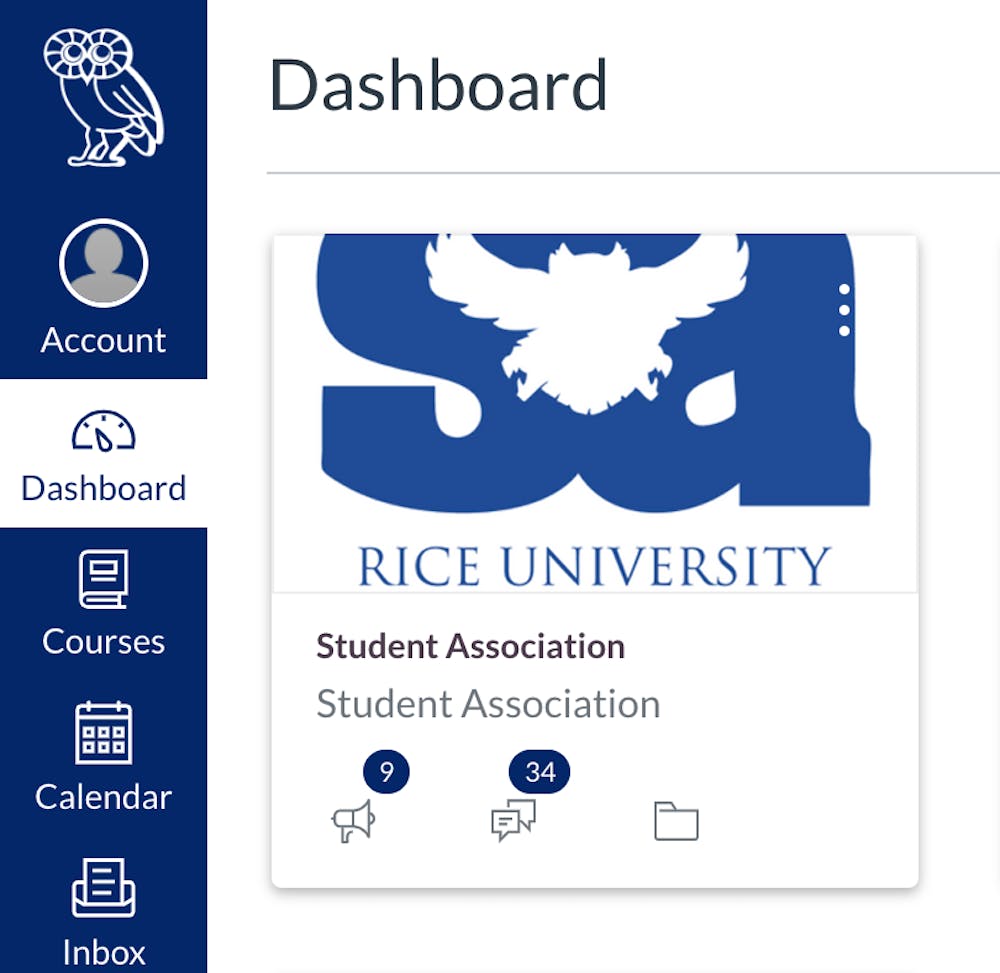 Following Rice’s response to the COVID-19 outbreak, including the transition to all online classes, the Student Association has moved to an online platform for the remainder of this semester. Without the option of in-person Senate meetings, the SA is now using a Canvas page to hold discussions and send announcements.

According to SA President Anna Margaret Clyburn, the SA decided to move Senate discussions to a written form on Canvas rather than using other popular platforms like Zoom or Skype due to anticipated difficulties with scheduling synchronous meetings.

“We knew that people were in all kinds of different time zones; we knew as well that people’s family situations differed and we didn’t want anyone to have to neglect things that they needed to do with their families or neglect things happening in Senate,” Clyburn said.

Kirsty Leech, Wiess College SA senator, said that the transition to Canvas so far has been smoother than expected.

“We've seen really well-thought-out and beneficial discussion on resolutions, reports and more so far, which is great to see continue even with the move to remote Senate,” Leech said.

However, Clyburn said the transition to an entirely new system has come with its share of challenges.

“It would’ve been nice to maintain a space where people could continue to interact, just with the social isolation and everything,” Clyburn said. “It’s also been hard in terms of doing parliamentary procedure things as well and making sure that we remain in line with our constitution and bylaws, while also making the space as flexible and open to everyone as possible.”

According to Clyburn, the SA Senate has still had some face-to-face meetings using Zoom, including town halls and weekly office hours.

“It’s nice sometimes to be able to voice your opinions out loud and that’s really what we try to do,” Clyburn said. “[We want to] create different spaces that wouldn’t make it mandatory for someone to be there if they had other responsibilities at home but to give people space where, if they wanted to, they could come and share things aloud.”

In place of the in-person voting that would usually take place during Senate meetings, the SA will now email members a link to a Qualtrics survey to vote with. There are two voting blocks each week: the first for deciding on any amendments, the second for voting on entire documents themselves.

Originally, both blocks were 12-hour periods scheduled back-to-back from Monday evening to Tuesday evening. But according to Clyburn, this has now been changed to two 24-hour blocks from Monday evening to Wednesday evening, primarily to allow members more time to see discussions before voting. Clyburn said they wanted to make sure people had a chance to reflect on the entirety of discussions that took place throughout the week before making any decisions.

Nia Prince, Sid Richardson College president, said the increased accessibility of the Canvas page in comparison to in-person meetings has led the SA Senate to consider keeping it even after students are back on campus.

"Canvas has introduced new possibilities for the SA, and we've had discussions about potentially keeping the Canvas page in the future to increase accessibility for students who don't attend Senate to track and interact with our legislation," Prince, a junior, said.

Clyburn said the Canvas page will likely stay up after campus returns to normal as a supplement to in-person Senate meetings.

“This whole pandemic has really shown to me the real value of being able to meet in person, and meeting in person is something that we should treasure and use as productively as we can,” Clyburn said. “So it’s really making me rethink, are we using this time every Monday night as productively as possible and is Senate a space that is open to everyone in the way that I believe that it should be?”