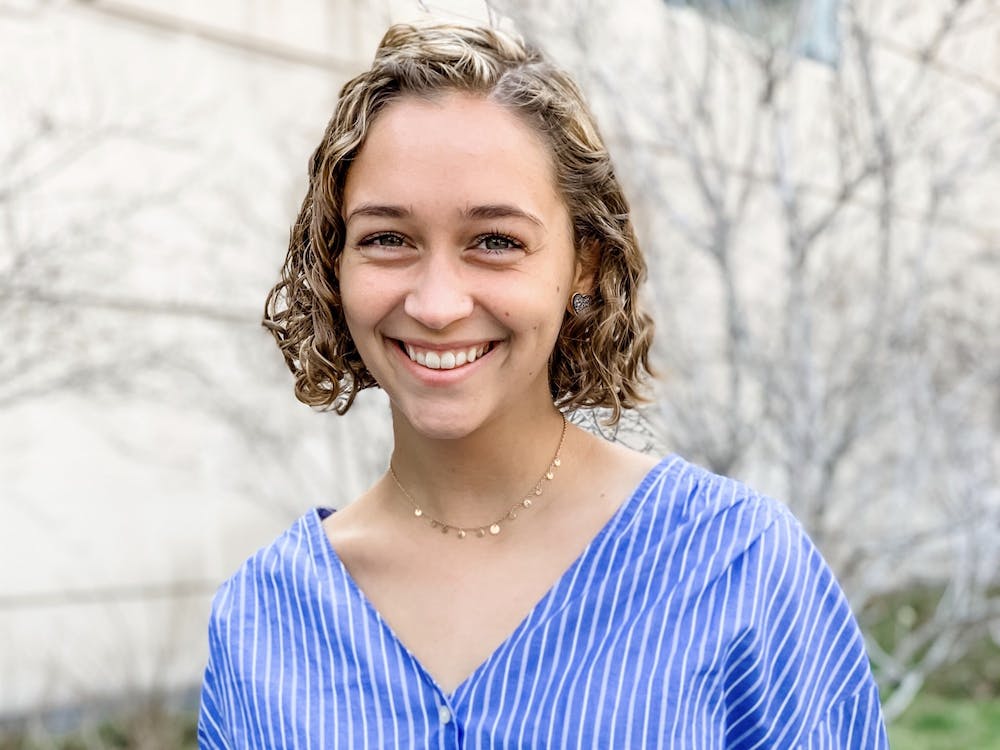 With its glittering waters and nine-mile running trail, White Rock Lake is one of Rebecca Francis's favorite places in Dallas. The Baker College senior takes every opportunity to run there with her family when she's home, usually followed by breakfast at a nearby coffee shop.

“There are also parks all around the lake with picnic spots, dog areas, docks, etc. I did a lot of my marathon training there over winter break, and my family goes almost every Saturday morning,” Francis said.

Francis is one of four sisters, and she describes her family as “really tight-knit.” The sisters are close in age, which made growing up together fun. Now that they’re all adults, two of Francis’ sisters still live in Texas, and she’s grateful for the time she’s getting to spend with them.

“We really like to run together as a family. We do a lot of 5Ks [a five kilometer running event] and things like that, around the holidays in particular,” Francis said.

This year, Francis finally followed through on an idea that she and her family had been talking about for a long time — she ordered T-shirts for every member that say “Francis Family Running Club.” This January, the family donned them as they cheered Francis on while she ran her first full marathon in Houston.

“[It] was really cute and fun,” Francis said. “Having that love for running and getting to do that together is definitely one of my favorite things that we’ve had since we were really little. My parents kind of bred that in us.”

Francis loves her hometown, a realization that hit her harder only after she moved to Houston for college.

“There’s apparently a big beef between Houston and Dallas as cities, but it’s nothing that I’d ever heard of before I moved to Houston to come to Rice, because no one talks about it in Dallas,” Francis said. “I always like to joke it’s because Dallas knows it’s better, so they don't feel the need to defend themselves.”

Francis said that Houston and Dallas are very different cities, but she’s come to appreciate both. Although her “favorite coffee shop in the world” — Davis Street Espresso — is in south Dallas, she said she loves the ones in Houston too. Among her favorites are Blacksmith, Boomtown Coffee and Catalina Coffee.

“I’m a really big coffee snob,” Francis said. “So I loved, when I was in Houston, getting to explore different coffee shops and sort of figuring out the ones I like.”

Francis started at Rice as a computational and applied mathematics major, but decided to add on a double major in political science after witnessing the 2016 presidential election. In 2018, she participated in an alternative spring break trip focused on reproductive justice. The following year, she led one on voter rights and mobilization.

As a site leader in her junior year, Francis spent the week in Washington meeting with community partners and organizations in the voting rights sphere. At the end of the week, she led her team to lobby on Capitol Hill.

“We had organized some meetings beforehand, but typically if you go to your congressperson's office on the Hill and say, ‘I’m Rebecca Francis and I’m a constituent of Colin Allred,’ they’re technically obligated to talk to you,” Francis said. “That doesn't always really happen, but we had luck getting into pretty much every office we tried to.”

Of all the discussions she had on her two trips to Washington, Francis said an interaction she had with a staffer at Ted Cruz’s office in 2019 was one of the most memorable. According to Francis, this wasn’t like the usual one-sided conversation, where a staff member would write things down without debating anything.

“We had a really interesting experience in Ted Cruz’s office, where we were not super warmly received but ended up having a really interesting discussion with one of [his staff members]. He was way high up in the food chain, he’d gone to Harvard Law School and was really well-versed in what he was talking about, but obviously disagreed with us on a lot of things,” Francis said. “That was kind of an intimidating experience, but it was a good one to kind of be able to have a really intense discussion.”

The particular bill that they were lobbying for was House ResH.R.1, a bill that included parts about expanding voter rights by increasing access at the polls and changing voter ID laws, among other things.

“It was basically this giant bill that had a million different parts of the main agenda that the Democrats wanted to put into place when they’d taken control of the house, and part of it was talking about voting rights,” Francis said. “[The Cruz staffer] was talking about constitutional law which was obviously not something that we were able to go quite as directly against.”

This past summer, Francis interned at Clarity Campaign Labs, a small political data firm in Washington. After graduating this year, she’s going to work at the firm as a junior analyst.

“It was kind of the exact intersection of math and politics that I was looking for, which was really exciting,” Francis said. “I’ve always been totally in love with [Washington], so it’s really my dream job in my dream city.”

On past visits to Washington, Francis enjoyed biking or running down to the National Mall and spending time on the lawns by the Smithsonian.

“It’s such a fun city and it’s got a wonderful energy about it,” Francis said. “There’s lots of young people which is really cool.”

Francis has also been playing the piano for several years. Now that she is socially isolating and has the time, she’s been practicing the piano a lot. Edward Elgar’s “Nimrod” from “Enigma Variations,” a piece she learned after coming to college, is one she particularly enjoys playing.

“It’s a big orchestral piece,” Francis said. “I’ve always been in love with [the] movement, and I found a piano version of it. That’s one of my favorite things to play, just because I think it’s really beautiful.”

In company, Francis’s music taste looks a little different. Two of her closest friends would always play old Taylor Swift songs while they hung out, and she’s come to associate the music with her time at Rice.

“Anything that’s kind of old, still country Taylor Swift, is something that will always remind me of Rice and Baker in particular,” Francis said. “I would not call myself a Taylor Swift fan, but I really like her old music, and it’s a fun kind of nostalgic thing for me.”

Of all aspects of her time at Rice, Francis said that she’s going to miss her community at Baker the most. Although she and her friends were really disappointed when they learned that their senior year on campus was being cut short, she said they quickly decided that they wanted to make the most of the time they had left.

“We immediately went to the bookstore and had the brilliant idea of using up all of our tetra that we weren't going to be able to use,” Francis said. “So we bought, like, hundreds of dollars worth of snacks from the bookstore.”

They spent the rest of the night hanging out in one of their suites and the Baker quad to spend time together, listen to music and dance.

After spending nearly 24 hours a day, seven days a week with her friends for four years, Francis said it’s going to be hard to get used to not being with them.

“I value my relationships a lot, and I think that’s something that I really sort of leaned into this year,” Francis said. “For a variety of personal reasons my junior year, I didn’t get to spend quite as much time with my friends as I really wish I had, but this year I was really able to kind of dive back into those relationships.”