Owls trying to stay fit away from campus 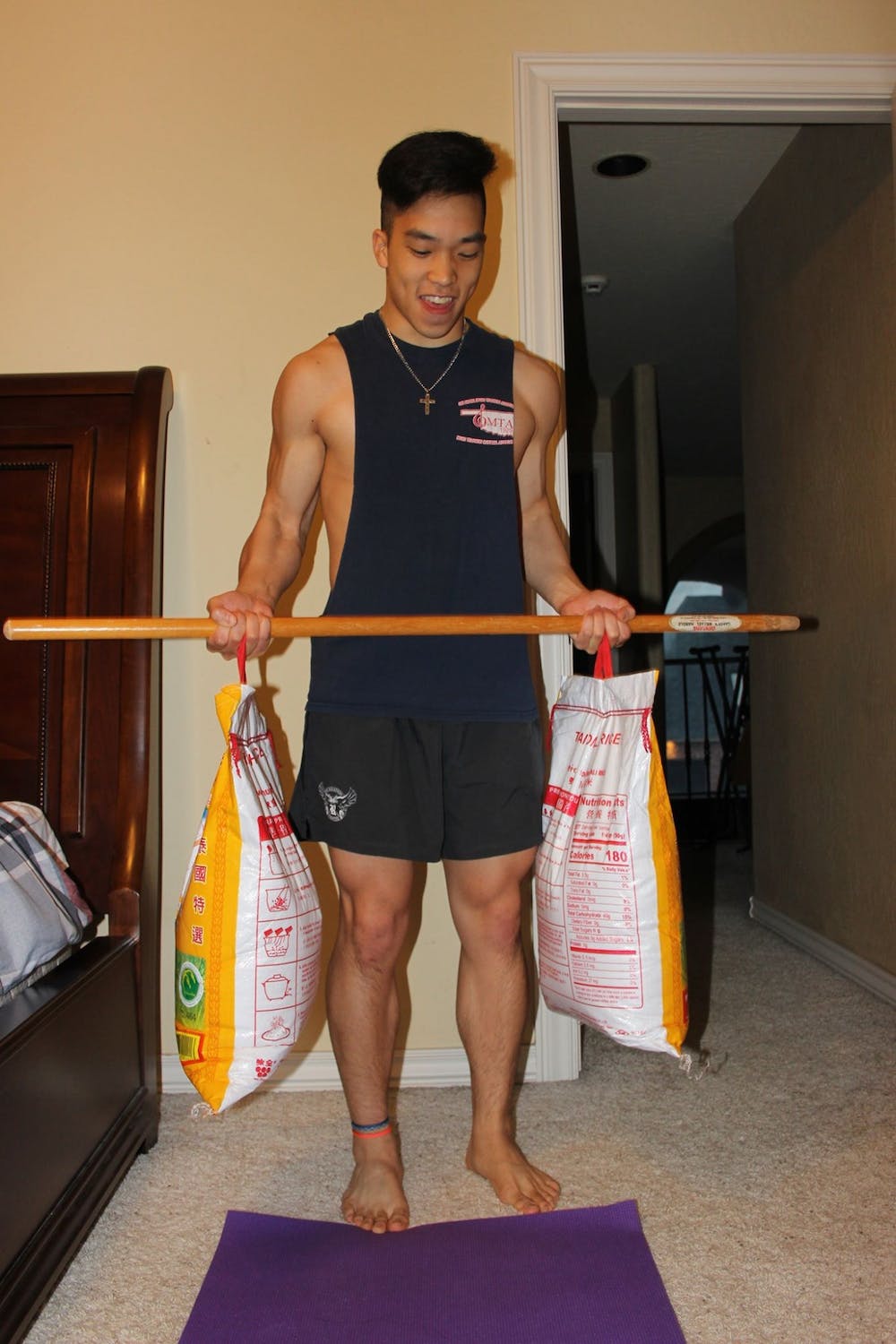 One built-in membership, one three-quarters-of-a-mile walk, two door-pushes and a Rice ID is all it takes for a Brown College student to have access to the Gibbs Recreation and Wellness Center. But separated now by space, time and a global pandemic, Kevin Ngo has had to get creative to stay fit while stuck indoors.

At Rice, Ngo would complete a full-body calisthenics workout three times a week and spend his rest days playing basketball.

“When I'm [at Rice], a lot of my friends just like to play basketball,” Ngo, a Brown junior, said. “I go out with them three times a week and play basketball consecutive days in a row. Cardio [is] achieved through basketball because I hate running.”

Forced to return to his hometown of Oklahoma City, Ngo needed a way to stick to his routine of going to the gym; for that, he used some creativity to get the full-body workout to which he was accustomed.

Ngo began by doing 100 pushups every day before his showers and putting textbooks in a basket to serve as a makeshift dumbbell. For ab workouts, Ngo borrowed a mat from his sister.

“It took me a few weeks to figure out what I was going to do to stay in shape and not just lose all of this,” Ngo said.  “I’m still learning. It’s just been using things … in [my] house to create [my] own gym, basically.”

Moving on from his basket of textbooks, Ngo amplified his bicep workout with a homemade barbell.

“I had found this stick in my house,” Ngo said. “It was pretty solid, strong wood. [And] you know, [with an] Asian household, we always got bags of rice. So you just put a bag of rice on each side of it and there you go.”

Ngo has stuck to his versatile calisthenic workouts to round out the rest of his physical activity.

“I used to do weights, but I switched to calisthenics a few years back,” Ngo said. “The thing that I liked about it was that you can turn your gym into any place.”

For students who are more used to a structured workout schedule, the transition to home workouts was a bit more challenging.

Emma Every, a Wiess College senior and a diehard Seattleite, had to adjust from her regular club soccer practices and rock climbing outings, while living in one of the country’s coronavirus epicenters.

“Seattle is pretty crazy because there were so many early cases here,” Every said. “Everyone is relatively tense and takes all of the precautions seriously. You really have to try to maintain 6 feet of distance [when] everyone is out at the same time.”

To avoid contact with other people, Every said she had taken up biking as her main source of physical activity.

“I borrowed a road bike from a neighbor and have just been riding around the city,” Every said. “It’s been a good way to get out of the house and [is] honestly more pleasant than biking normally in Seattle, since road traffic is reduced.”

Every has her sights set on biking the Lake Washington Loop, a 60-mile ride with lake and mountain views and significant elevation gain. To hold herself accountable, she uses Strava, a mobile app marketed as “the social network for athletes.”

“I use … Strava to keep that competitive and communal aspect that team sports used to give me [at Rice],” Every said. “My friends and I [can] support each other on our workouts.”

Noah Rossi, a Baker College freshman who was also accustomed to a more regular workout routine, has readopted running in lieu of his workouts at the Rec Center and with the Club Sailing team.

“I was using the Rec … probably three times a week … [doing] weights and then occasionally …  the rowing machine,” Rossi said. “I previously had run at home but I wasn't really running at Rice. I picked up running when I got back.”

Rossi, a Delaware native, also planned on sailing at home in the Chesapeake Bay, but government orders kept him from doing so.

“I wanted to pick up sailing when I got back home but it turns out … Maryland has banned all water activities,” Rossi said.

According to Rossi, his running plan was working well until he fell ill.

“I started getting a dry cough and high fever and I was like, ‘Uh oh,’” Rossi said. “So I stopped [running].”

Rossi’s symptoms cleared up and he was able to return to running. He noted, however, that he’ll never know whether he had COVID-19 or not.

For students seeking other ways to continue exercising, the Rec Center has a number of options available.

The Rec Center is currently offering group exercise classes over Zoom that do not require much equipment. These classes include boot camps, Chiseled, Owl Pump, Zumba, yoga and pilates. According to Alex Faris, assistant director for fitness and wellness, students have enjoyed the classes thus far.

“We have received positive responses from participants since launching these classes,” Faris said. “Many have reported the class offerings help them cope with various stressors and allow a space to connect with others during this time of social distancing.”

Sarah Granberry, an instructor and program manager under Faris, teaches yoga classes at the Rec Center and said there have been some challenges to moving classes online.

“Working [to find] the right teachers and personalities online — we’ve had to figure that out,” Granberry said. “Some of my instructors didn’t even want to do it online. It is challenging. As a yoga instructor or any instructor, you aren’t also taught to teach [your practice] online.”

Due to technical difficulties at home, Granberry has been cleared to teach her class over Zoom while streaming from the Rec Center. Despite the challenges, Granberry said that her classes have been going well and that she has received mostly positive feedback, especially from faculty members.

“[Faculty are] really happy. They’re really happy that we’re offering anything,” Granberry said. “It has been a new challenge ... [but] my classes have been going great.”

“You can control your time a lot more [now], so control it and use it for good,” Granberry said. “Manag[e] your time effectively and [try] to stick to a basic routine. Meditation is also a huge resource at this time.”

Ngo said it’s important for people to look at what they have rather than wish for something they don’t.

“I know I have stuff that other people might not, but everyone has … some kind of level ground that they can do stuff on,” Ngo said. “It just takes a little bit of thinking [and] a little bit of creativity.”

And Every, for her part, encouraged people to be kind to themselves.

“We’re all doing the best we can,” Every said. “Physical activity has certainly helped me feel better [on] some days, but mental health is also important. So I try not to put too much pressure on the distances or speeds [of my rides] and just do what I’m feeling up to, even if that’s simply walking my dog around the block.”