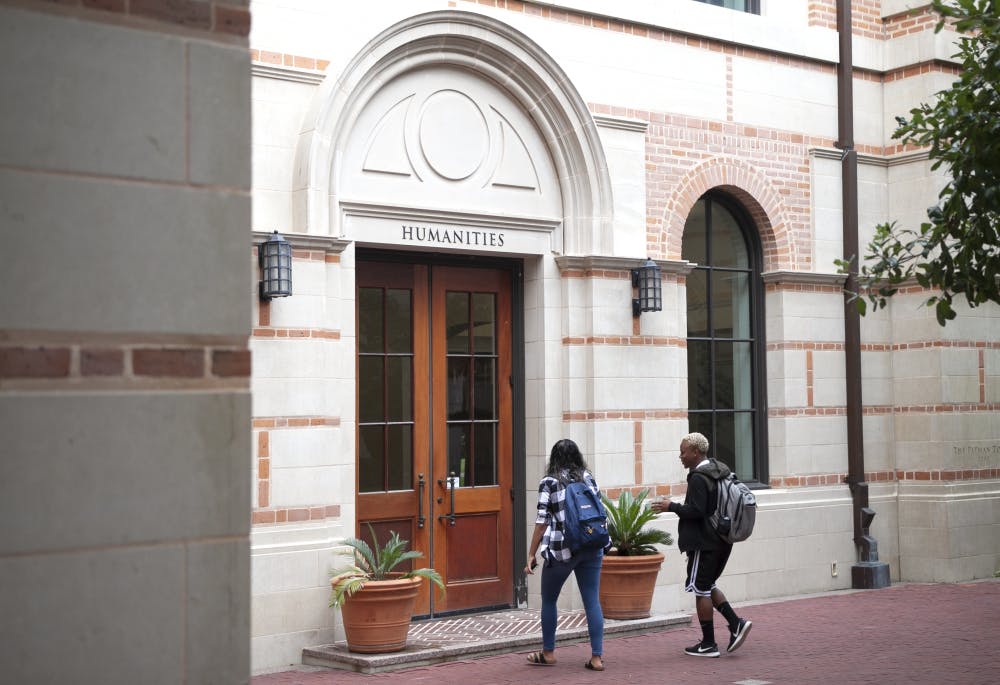 Editor’s Note: The identities of some students and sources mentioned in this story have been removed to protect them from possible backlash. Anonymous students who are referenced multiple times were given false names marked with an asterisk. Any questions about our anonymity policy and sourcing should be directed to thresher@rice.edu.

On Feb. 7, the students in Topics in Women Writers, an English course, received a Canvas announcement with surprising news — their English professor, Colleen Lamos, had been suspended from teaching. In the message, Lamos shared her thoughts on the situation.

“I’m writing to explain why I am no longer teaching our class,” Lamos wrote. “It’s a bizarre story.”

In the message, Lamos wrote that she believed she’d been suspended due to a disagreement with the dean of humanities about her disability status.

“For the past two years, I have been engaged in a dispute with the chair of the English department and the dean of humanities regarding my disability status as a diabetic,” Lamos wrote. “Since the dean’s decision on Tuesday to suspend me from teaching, it has become a legal matter.”

The week after, Lamos was replaced with a new professor.

But the course did not continue as if nothing had changed. One student, used to the original syllabus and Lamos’ teaching style, stopped auditing the class due to the disruption. For weeks, the three-paragraph Canvas announcement was the only information the students had about the suspension.

Microaggressions and race-based remarks: the official reason for suspension

According to Lamos, Dean of Humanities Kathleen Canning directly attributed her suspension to a complaint about microaggressions regarding race. Lamos, an associate professor with tenure, said she believes that the incident that led to the complaint was a misunderstanding on the part of the students.

“At the beginning of every class, I go around the room and ask students to introduce themselves. I just asked [a few students] if their names were Hispanic so I could make sure I could pronounce them correctly. The students, for some reason, misunderstood the nature of my question and thought that I had somehow singled them out or something for being Hispanic,” Lamos said.

Although the Thresher was unable to confirm whether this complaint was submitted, other students have raised concerns about the appropriateness of some of Lamos’ comments in class. Jane*, one of Lamos’ previous students, said she was uncomfortable in Lamos’ class because she felt Lamos committed many microaggressions against minorities.

“She made some comment about basketball to one of our other classmates who was Black and said she played volleyball, not basketball,” Jane said. “Basically, Lamos was a very thoughtless, in my opinion, talker … She’s a woman who does not have much tact, in my opinion.”

During a one-on-one meeting with Lamos, Jane said they were discussing her grammar mistakes when Lamos seemed to make an assumption about her parents’ education background based on her race, even though both of her parents are college-educated.

“She just said something like, ‘Yeah, I can relate to you because my parents were both poor farmers and I had to learn these rules and I didn’t know how to speak proper English,’” Jane said. “I could tell that she was making an assumption about who I was or where I come from, which rubbed me the wrong way afterwards.”

Sam*, a current student and another one of Lamos’ past students, said that they noticed Lamos make comments that Sam interpreted as racist on multiple occasions.

“Dr. Lamos, for some odd reason, asked [a second generation African American student] in the middle of class, ‘So you know, living in a country where it’s not your first language, it’s hard, right?’ To which [the student said], ‘I don’t know any other language except English,’” Sam said.

Canning said she could not comment on topics regarding faculty employment and suspension for legal reasons. But according to Rice University Policy 201, administrators are only allowed to suspend tenured faculty if their continued presence “threatens harm” to other people or to the faculty member themself.

One student submitted a complaint more extreme than a microaggression — alleged physical assault. Last semester, Sam submitted a complaint to Canning and English department chair Rosemary Hennessy alleging that Lamos threw an object at them during office hours. According to Sam, they and another student began taping office hours with Lamos after they became concerned with Lamos’ treatment in class. It was during one of the recorded meetings, for which the audio was shared with the Thresher, that Sam said Lamos threw their paper at them and attempted to throw a pencil at them as well.

In the recording, Lamos audibly shuts the door before discussing the verse form of a passage of literature covered in the course, and states that it might be considered a villanelle. She then seems to realize that the student doesn’t fully understand what she means by “villanelle,” and begins scolding Sam, her voice clearly raised in the recording.

“Yes it does, for God’s sake, it does in the book,” Lamos said, her volume significantly raised.

As Lamos makes this statement, the audio recording plays an audible noise. In an interview with the Thresher, Sam said this was the sound of Lamos throwing their paper at their face and a pencil across the room.

“She was slamming things against her desk and throwing — she threw a pencil at me, and it hit the bookcase on the side of the wall, and threw just a sheet of paper… at me,” they said. “It was uncrumpled and everything, but it’s kind of threatening.”

When asked about the incident, Lamos said that the student’s allegations were false. Lamos said she believes the student was upset about the grade they received on their paper, and recorded the meeting to “annoy” her.

Lamos said that during the meeting, she attempted to explain the problems with the student’s paper multiple times, but they said they didn’t understand. According to Lamos, another student was standing outside her office for office hours, which was why she shut the door of the office as the student had pointed out — to protect the student’s privacy.

“[They] claim that during the minute or so when I was telling [them] I was not going to raise [their] grade, [the student] claims I threw a pencil at [them]. This is not true. I didn’t throw [their] paper at them either,” Lamos said. “There’s actually zero evidence for it.”

The day after the meeting occurred, Sam spoke to their classmates about the definition of villanelle; they said no one else in the class had heard of the term either.

“I asked everyone in the class the day [after] this happened, before she came into class, and I said, ‘Do any of you know what a villanelle is?’ And no one could tell me what a villanelle was,” the student said.

Although Canning and Hennessy never addressed the subject with them again, Sam was then transferred into a newly created section of the same course with English professor Sarah Ellenzweig. They were the only student in the class.

“The dean handled that badly,” Lamos said. “To begin with, she just assumed that I was guilty, which shocked me because that’s not how your boss is supposed to treat you.”

Although Canning declined for legal reasons to confirm the reason behind Lamos’ suspension, Lamos said she believes Canning and Hennessy used the complaint as an excuse to suspend her after she filed a legal complaint against them for banning her service dog from campus.

Lamos said she has diabetes and believes that her service dog, a dog named Lily who is trained to provide her with care, is vital to her health.

“Part of my [diabetes] treatment is to be accompanied by my service dog. My service dog is trained to alleviate psychological symptoms and also trained to detect and alert me to hyper- and hypoglycemic episodes, so she serves an extremely important purpose for me, potentially life-saving, even,” Lamos said.

Lamos said she believes the suspension had nothing to do with the complaint lodged against her, but rather the disagreements she’s had with the school of humanities.

“[The suspension is] really just an excuse on the part of the administrator[s] in order to address an actually unrelated issue. And the unrelated issue … is the fact that I filed a [legal complaint] against Rice University and particularly the chair of my department and the dean of humanities for failing to abide by the Americans with Disabilities Act,” Lamos said.

In a statement to the Thresher, Canning said she is aware that Lamos sent a Canvas message to her students attributing her suspension to a disagreement about Lamos’ disability, but said this was not the reason why she was suspended.

According to Lamos, Hennessy banned Lily from coming on campus two years ago, a decision that Lamos has been trying to get reversed. Lamos said that when she reached out to the Disability Resource Center on campus, she was met without support.

“The reason that my [department] chair gives for banning her from campus is that Lily wasn’t on a leash one hundred percent of the time,” Lamos said. “Occasionally, she was off leash. She was actually trained from birth to be off leash.”

Hennessy said that Lily was banned from campus after the dog repeatedly violated Rice policy, and after other complaints surfaced regarding the dog’s behavior.

“Professor Lamos’ dog was banned from campus after numerous consultations with the Disability Resource Center and the dean of humanities’ office following repeated reports of violations of Rice policy and repeated warnings issued to Professor Lamos regarding those violations,” Hennessy wrote. “Other incidents were reported pertaining to the dog’s disruptive behavior on campus and inside Prof. Lamos’ office.”

Lamos said she views the decision to ban the dog as a violation of the federal Americans with Disabilities Act. Alan Russell, director of the Disability Resource Center, said that the decision “follows the guidelines set out on the Department of Justice website regarding service animals.”

“Staff, faculty and students with service animals must ensure the animal is under control,” Russell said. “If the animal is out of control, it may be removed from the premises. For instance, barking repeatedly, jumping up at people or wandering away from the handler.”

Following Lamos’ suspension period, she will either be reinstated or face a hearing by a faculty hearing panel to determine whether the concerns for which she was suspended establish cause for dismissal, according to Policy 201.