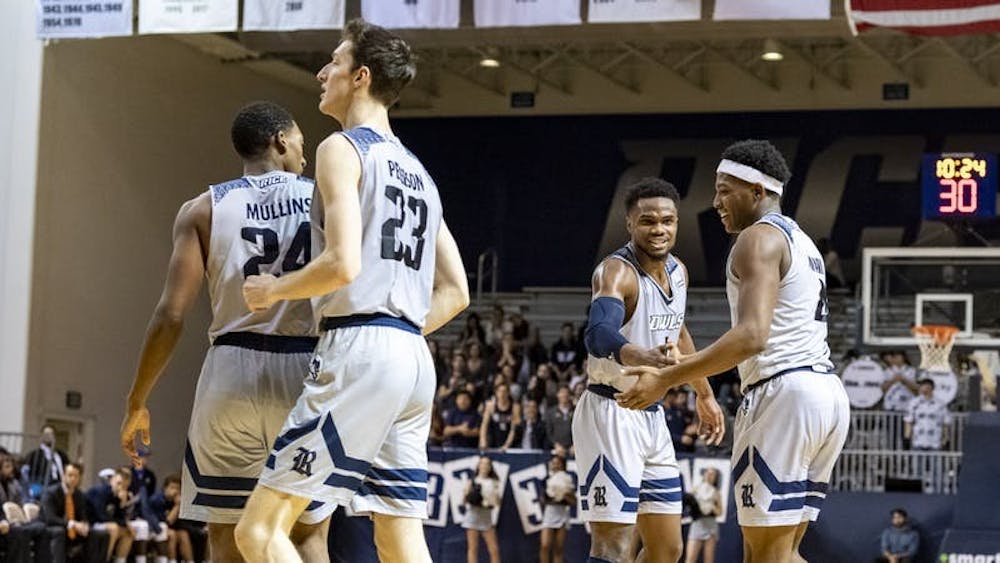 In his second season, Murphy led the Owls in scoring (13.7), dunks (21), field goals made (131) and blocked shots (16). He credits his stellar season to the work he put in the summer after his freshman year, during which he gained 10 to 15 pounds and grew to his commanding 6 feet, 8 inches.

Murphy said his desire for more minutes on the court fueled his rise up the depth chart.

“I just worked,” Murphy said. “I worked so hard. I think I was probably the 10th or 11th man on the team … [but] I ended up becoming one of the rotation players, like the sixth man. That was really important to me.”

According to Murphy, his best individual moment was at the University of California, Santa Barbara back in November  2019 when the Owls came back from a 22-point deficit in the second half. Murphy scored a team-high 18 points and shot five for eight from the 3-point line.

“It was crazy,” Murphy said. “The entire time we're just trying to chip away, chip away and not think about the lead. And we ended up coming back. It was a great comeback.”

At Rice, Murphy said balancing school and basketball was challenging. While he said that some could get by in school with minimal effort, his desire to do well meant less time playing the sport than he wanted. He was ambivalent about his time as a student.

“There were good moments, [and] there were bad moments as well,” Murphy said. “For the most part, I mean, I just was trying to focus on basketball.”

Murphy reflected positively on his relationship with head coach Scott Pera and what they accomplished as a program.

“Me and Coach Pera had a good relationship, and it built over time as well,” Murphy said. “[We] definitely grew a lot [as a team]. We're young guys, and we just found a way to build and … worked hard. We accomplished a decent amount for what we were expected to accomplish, so definitely proud about that.”

With his upcoming redshirt season as a Cavalier, Murphy said he’ll miss the team most of all and will remain in contact with them.

“[I will] definitely try to talk to them a lot because … those are still my brothers,” Murphy said. “We were a goofy bunch of guys. We spent a lot of time with each other, and we had a lot of fun. I've built a pretty good bond with them over the last two years.”

Josh Parrish, a transfer from Texas Christian University, entered the portal as a graduate transfer. Parrish set a Rice single-season record in league play last season, leading C-USA with a .673 field goal percentage. Like Peterson, Parrish played every game in the 2019-2020 season and averaged 7.5 points per game.

For Pera, Murphy’s exit is the latest in a long line of Owls choosing to transfer. In his three years at the helm, 15 players have transferred. Pera said that although it is unfortunate when players leave the program, it doesn’t deter him from continuing to try and recruit the top student-athletes he can find.

Pera saw this past season as another year of positive growth, as the Owls improved to 15-17 overall after finishing 13-19 and 7-24 in the 2018-2019 and 2017-2018 seasons, respectively. Pera attributes the step toward a sustainable, winning program to players that have been a part of all three of his teams.

“The whole purpose of what we're trying to do is build a program,” Pera said. “With Ako [Adams], Rob [Martin] ... and Josh [Parrish], [who’ve] been in the program for three years, and then the freshmen who … had a year under their belt … you can add some continuity. And [when you] continue to add good players ... then you have a chance to get better. I feel we're headed in that direction this year.”

Pera cites three new additions that will contribute to that chance to get better: Noah Hutchins, a 6-foot-1-inch guard out of Buffalo, New York; Cam Sheffield, a 6-foot-6-inch guard/forward out of Alpharetta, Georgia; and Mylyjael Poteat, a 6-foot-9-inch forward from Reidsville, North Carolina.

“[I’m] really excited about those guys,” Pera said. “I think all three of them have skill sets and talent to contribute right away. Noah, Cam and Mylyjael all are terrific players, [and] they're terrific guys. I think about Rice, they fit our recruiting model of the true student-athlete.”

Another player Pera is also encouraged at the prospects of is Malik Ondigo, a 6-foot-10-inch forward who transferred from Texas Tech University back in June and sat out due to NCAA transfer rules.

“We are really excited about Malik,” Pera said. “We watched him all year obviously on the practice floor and how hard he was to stop for our guys … similar to when we had Egor [Koulechov] a few years ago. Having him eligible will be a big boost for us, and [he is] somebody we're gonna really count on and lean on to give us scoring inside and out at that position.”

With the university closed and activities suspended until July 1, it’s up to the players to train on their own during quarantine. Pera said the guys on the team want to continue to do the right thing for the program, and he is looking to current players to take the next step and contribute.

According to Pera, he and the rest of the coaching staff have been trying to keep up player morale and check in on them at least every other day. Once the whole team is signed, Pera expects to do things over Zoom and plan fun activities to keep them motivated.

To fans thinking ahead to next season, Murphy said that continued support for the team will pay off.

“The guys on the team now, they’re still fighting, they’re still pushing in order to win, and they’re [going to] compete,” Murphy said. “I know that for sure.”