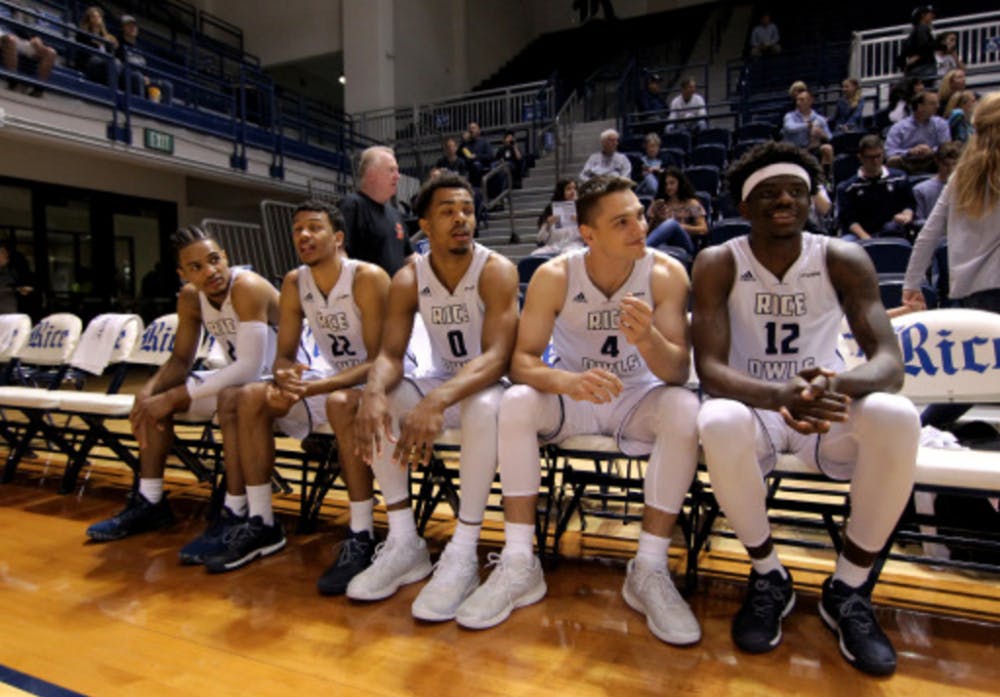 Rice men’s basketball lost four of its top players Monday and Tuesday when sophomore guard Marcus Evans, junior guard Egor Koulechov, junior guard Marcus Jackson and freshman forward Corey Douglas announced they are planning to depart after this school year. Evans, Koulechov and Jackson were the top three scorers on the team this season. Douglas missed most of the season due to injury but was widely regarded as Rice’s top freshman on this year’s team.

All four players announced their decisions on Twitter. Evans said he is thankful for the opportunity Rice provided him.

“I have learned so many lessons off and on the court that have made me the man I am today,” Evans said. “This has been the hardest decision of my life but I have decided to receive my release and transfer from Rice University.”

In just two seasons with the Owls, Evans became the 12th Rice player to reach 1,000 career points, 200 rebounds, 200 assists and 100 steals. He was named to the First Team All-Conference USA in both of his seasons with the Owls and won the C-USA Freshman of the Year Award last season. On a per game basis, he led the nation in freshman scoring last year.

According to a tweet by Evans’s father Aaron Evans, the decision to transfer was not made in response to the hiring of new head coach Scott Pera.

“It would be wrong to make this about Coach [Pera],” Aaron Evans said in a tweet. “He is a great person and will be a great [head coach]. [The] team loves and respects him.”

Koulechov said on Twitter that leaving Rice was one of the most difficult decisions of his life. According to Koulechov, the hiring of Pera made his decision to leave even more difficult.

“I love [Pera],” Koulechov said. “Make no mistake about it, Rice hired the right man. He is going to win here and his hiring had nothing to do with my decision. In fact, quite the opposite. His hiring is what made this such a difficult decision.”

In two years at Rice, Koulechov complemented Evans as an equally talented 3-point shooter. He transferred to Rice from Arizona State University following his freshman year, then redshirted a year at Rice due to NCAA transfer rules. This season, he led the team in minutes and averaged 18.2 points per game while starting every one of the Owls’ 35 contests.

Jackson will graduate in May but has a fifth year of eligibility because he redshirted last season due to injury. He will use his last year of eligibility to play at a different university. Jackson averaged 12.2 points per game this past season, adding a third 3-point threat to the shooting duo of Evans and Koulechov. In an Instagram post on Monday, Jackson thanked Rice for his four years at the school and said he will be honored to become a Rice graduate.

Douglas missed most of the season due to injury, but before being sidelined, he started eight of nine games at center. He averaged 4.4 points and 3.8 rebounds in just over 17 minutes per game.

Late Monday night, the Houston Chronicle reported that sophomore forward Marquez Letcher-Ellis has also received his release to transfer. Letcher-Ellis, however, is still considering returning to Rice despite being granted a release.

The transfers are the first during Pera’s tenure. Recently, in college basketball, it has become common for players to transfer schools when a coach departs. Rice will now have to retool both its coaching staff and roster after its best season in 13 years.