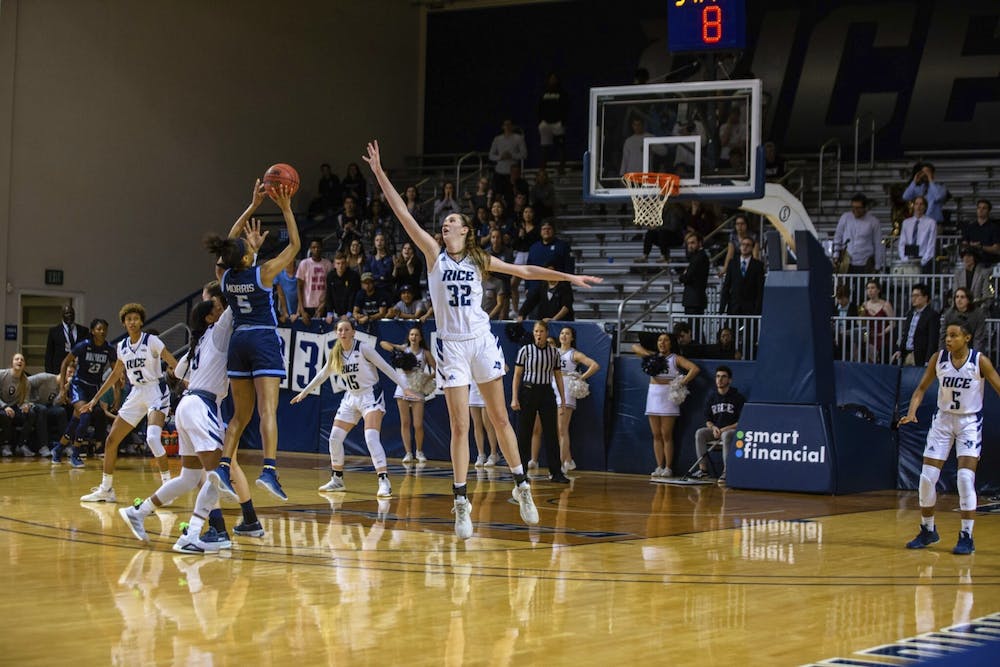 Rice women’s basketball will look to defend its Conference USA title when the team plays its first game of the C-USA tournament tomorrow. The Owls’ opponent is not yet known, as they will be playing the winner of Wednesday’s game pitting Marshall University against the University of Southern Mississippi.

“We know there are multiple teams we might play throughout the tournament,” Langley said. “Our staff does a tremendous job of scouting our opponents, and they’ll have us ready. We are very focused on taking things one game at a time. We look at our last game and at what we need to improve on from that game. If we’re able to grow from that game and make the changes that we need to, it will prepare us for our next game, regardless of our opponent.”

The Owls have seen both these teams before in January, beating Marshall 81-43 and topping Southern Miss 75-64. Junior center Nancy Mulkey said that reviewing those previous matchups is important, but the team is going to approach this tournament as if it were a fresh start.

“Going into the tournament, it’s a new season,” Mulkey said. “We talk about how we have non-conference, which is one season, then we have our conference season and now we have our postseason. The mindset is no different now than it was before conference or preseason. This break is a refresher, and we just have to take what we learned in our two previous ‘seasons’ and translate it into the tournament.”

Rice had a lot of success over the course of this year, after a slower start than last season. The Owls started out the year 5-6 in their non-conference schedule, including a 62-61 loss to then-No. 5 Texas A&M University. But once they started conference play, the Owls were virtually unstoppable. They went 16-2 in conference, including a 5-0 run to conclude the season. Their last game, against Old Dominion, was a 73-70 victory that allowed them to take first place in C-USA and claim the No. 1 seed in the tournament. Langley said that it was good to see the constant improvement throughout the year, especially bouncing back after losing to Old Dominion earlier in the year.

“We’re not a goal-driven team,” Langley said. “We don’t have a tangible goal, but it is to be better. It is to be the best team we can become. I’m proud of this team because every day we take the floor, we work on being better than we were yesterday. I’m really proud of the progress we’ve made so far.”

Multiple Owls earned All-Conference honors, with both Mulkey and senior guard Erica Ogwumike being named to the All-Conference USA First Team and All-Defensive Team. Ogwumike, who led the league in scoring with 21.3 points per game, joins former Owl Jessica Kuster as the only players in program history to earn first-team honors in three consecutive years. Mulkey is second on the team in scoring and is ranked fifth in the nation in blocked shots per game (3.21). Freshman forward Lauren Schwartz also received honors, earning a spot on the All-Freshman Team.

As the team readies to defend its title, junior guard Sydne Wiggins said she recognizes the benefits of playing alongside veterans.

“[Experience] helps a lot,” Wiggins said. “You know how everything feels, you know the gym. We’re getting there a couple of days early, and hopefully, that will get everyone acclimated to the arena. We’ll be ready by the time the first game comes around.”

The Owls were dominant in the tournament last year, winning three games in convincing fashion on their way to an NCAA tournament bid. Mulkey said she believes the team is capable of an excellent performance in the tournament, especially because Rice’s younger players can rely upon the team’s veterans.

“It helps to have the experience, especially with a group of younger players,” Mulkey said. “For them, it’s a completely new experience, and even for the people who didn’t play last year but are playing this year. Just having that leadership role, and letting the younger teammates know that we have this, it’s completely in our control, and we just have to play like we know how to play.”

The players, experienced and not, are keeping their focus on the next game and trying not to get ahead of themselves, according to Wiggins. In addition, the upperclassmen are trying to ease the pressure by keeping the experience lighthearted, Wiggins said.

“I tell the younger players to just do what they’ve been doing every single day,” Wiggins said. “There’s really nothing different about it, but because it’s tournament play, [it] makes it more fun. But the game doesn’t change at all, it’s still 40 minutes.”

The Owls will look to extend their season this Thursday at 11 a.m. when they face the winner of Marshall and Southern Miss. Should they win, the semifinals are on Friday and the championship game is on Saturday.