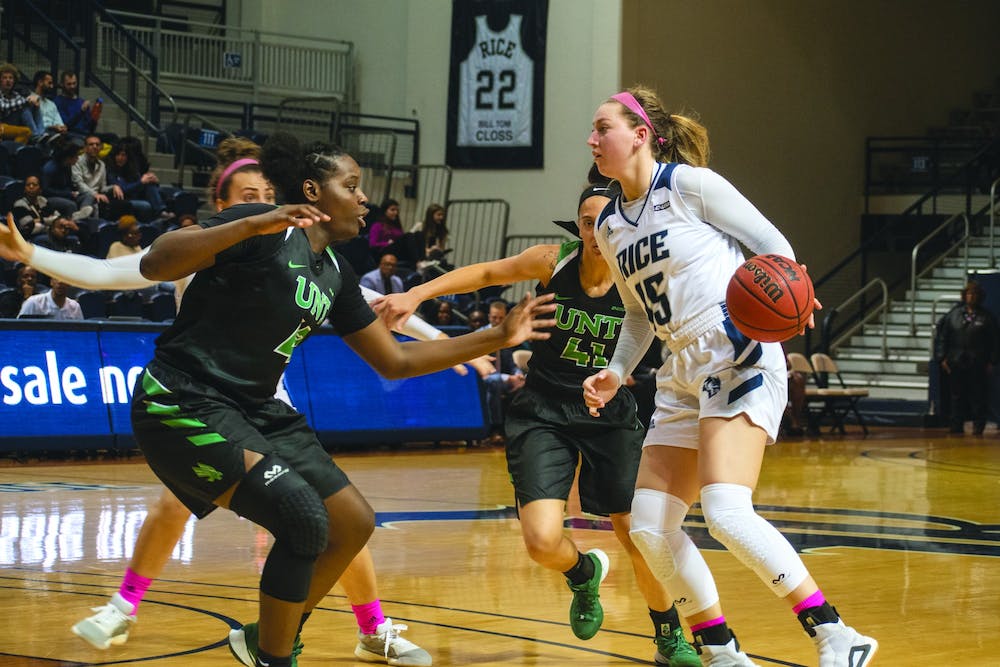 Rice women’s basketball plays two crucial games at home this week, one against the University of Texas, El Paso on Thursday and the other against Old Dominion University on Saturday. Rice and Old Dominion are tied for the best record in Conference USA, which means that if both teams win their respective Thursday games, the Sunday matchup will decide both the conference champion and who gets the No. 1 seed in the C-USA tournament that starts next week.

The Owls are currently on a three-game win streak, the most recent of which came last Saturday against Louisiana Tech University. The Owls were losing for most of the game against the Bulldogs, but a strong fourth quarter followed by a dominant overtime period allowed them to pull away for the 73-60 victory. According to senior guard Erica Ogwumike, Rice lacked tenacity in its performance against LA Tech.

“We were a bit stagnant offensively throughout the game, and it took us a while to get into a rhythm,” Ogwumike said. “But towards the end, we knew we didn’t have much time, and we had to pull it through.”

The Owls were able to win that game thanks to a strong team defense that held the Bulldogs to just 36 percent shooting from the field. That performance mirrored the team’s season-long defensive output (57.3 points per game allowed). They were also led by junior center Nancy Mulkey, who provided 22 points. Head coach Tina Langley said Rice’s comeback against LA Tech was impressive.

“Besides [a Feb. 13 loss against ODU], we hadn’t been in that position of being down the entire game like we were against LA Tech,” Langley said. “So to come back and win, it was a great feeling for our team.”

As the Owls turn their attention to the final two games of the regular season, they first meet UTEP, a team they beat 69-61 on Jan. 23. The Miners played good defense against Rice, including holding the Owls to just three made 3-pointers on 16 attempts and forcing 21 turnovers. Langley said UTEP used aggressive defense in the teams’ last matchup.

Following UTEP, the Owls will end their regular season against fellow C-USA giant Old Dominion, a team they lost to in overtime earlier this year, 66-59.

One point of emphasis for Rice in practice this week will be ball control, because the team failed in that department early in the season, according to Ogwumike.

“Controlling our turnovers is something that we were pretty bad at during the beginning of this year,” Ogwumike said. “I think we’ve gotten better at every game as the season has gone on, but it’s something to think about in the coming games.”

Langley said she is happy that the Owls have overcome their rocky non-conference display, in which they registered a 5-6 record. Now, Rice holds a 19-8 record.

“This team learns from everything, whether it’s a win, a loss, practice or a film session,” Langley said. “There’s a lot of youth on the team this year, and there was a lot of learning of one another. I’m proud of the way we’ve taken it day by day and steadily improved.”

“Our whole non-conference schedule was a pretty big learning experience,” Ogumike said. “We played a lot of Power Five schools, and coming off of a season where we only lost four games, it was pretty tough to play that and still have that confidence and want to grow from every single game. They were hard teams, and we competed close with them. It was a little sad, but I think we grew from that.”

Now, just two games away from the C-USA tournament, Langley said she believes Rice can win the C-USA Tournament and qualify for the NCAA Tournament.

“As we’ve gotten to know each other and grown over the course of this season, I think we’re peaking at the right time,” Langley said. “From everything I’ve seen, now is the right time for this team.”

The Rice men’s tennis team lost their game last weekend, falling to the University of Texas, San Antonio by a score of 5-2. With the loss, their record fell to 8-9 on the season.