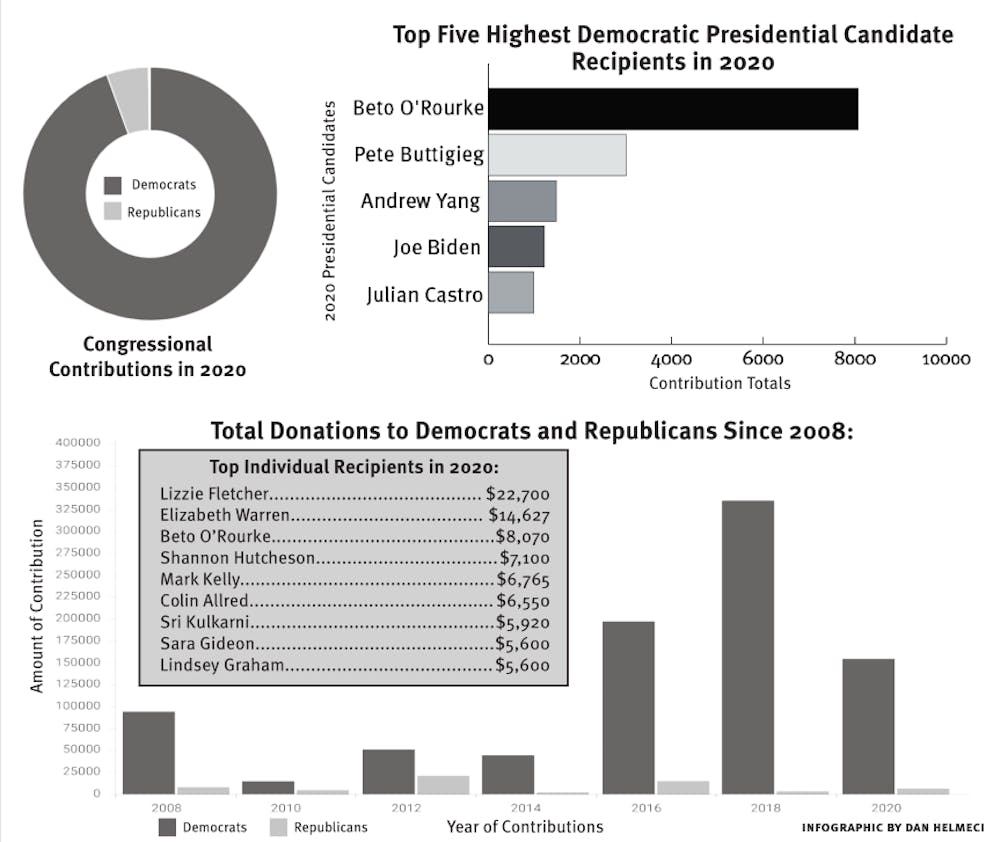 Rice faculty and administrators have donated $791,014 to various political campaigns and organizations since the 2012 election cycle, with the majority of donations going to Democratic candidates, according to a review of the Federal Election Commission Records.

The sum was comprised of more than 6,000 individual donations made by 330 different members of faculty in the past eight years. Top recipients of these donations include TX-07 Congresswoman Lizzie Fletcher and presidential candidate and senator Elizabeth Warren.

This heavy skew toward the Democratic Party is representative of the political alignment of Harris County, which is becoming increasingly Democratic in recent years, according to research by the Rice Kinder Institute. For example, in the 2018 Senate election, candidate Beto O’Rourke received 700,200 votes from Harris County, overwhelming Ted Cruz by more than 200,000 votes, according to the New York Times.

Rice Director of Government Relations Nathan Cook said he was glad to see Rice faculty and students get involved in politics at Rice.

“The great thing about our community is that we remain a welcoming place where everyone — regardless of political affiliation or ideology — can visit and engage in civic discourse and not be subjected to threats, obscenities, harassment or disruption,” Cook said.

Anne Chao, adjunct lecturer in Humanities, was one of the top donors during this eight-year period, donating more than $140,000 to various political organizations and campaigns. Her top donation of $25,000 went toward Hillary Clinton’s Victory Fund in 2016. Chao said she found it valuable to support candidates she felt strongly about, and was determined to help candidates like Clinton win the election.

Maddy Scannell, president of the Rice Young Democrats, said she would like to see more faculty involvement.

“I think being in a liberal environment isn’t just ‘we vote for Democrats,’” Scannell, a junior from Martel College, said.  “It’s also a question of how we want society to work for us, and what ideas we want represented in our education and society.”

Representatives from Rice Republicans said that the large Democratic population at Rice is nothing to be surprised about. Morgan Bates, a sophomore from Wiess College, mentioned that although this majority leaning comes at no surprise to her, she feels heavy criticism for being part of the Republican Party.

“It’s no secret that conservative students on campus are heavily stigmatized,” said Bates. “The most important element of political engagement on campus is bipartisan communication and unfortunately, that may just be Rice’s weakest link in our student body.”

“As long as the professors do their jobs well, I couldn’t care less who they donate to in their own time,” Keller said. “As an Electrical Engineering major, the majority of my professors do a good job of keeping irrelevant and disruptive political non-sequiturs outside of the classroom. However, classes are not completely free of these annoying distractions, and whenever they do occur, they are always liberal in bent.”

[Updated 3/5/20 at 10:20 a.m.] The original version of the story included a trimmed quote from Keller. The full quote has now been added to provide additional context.