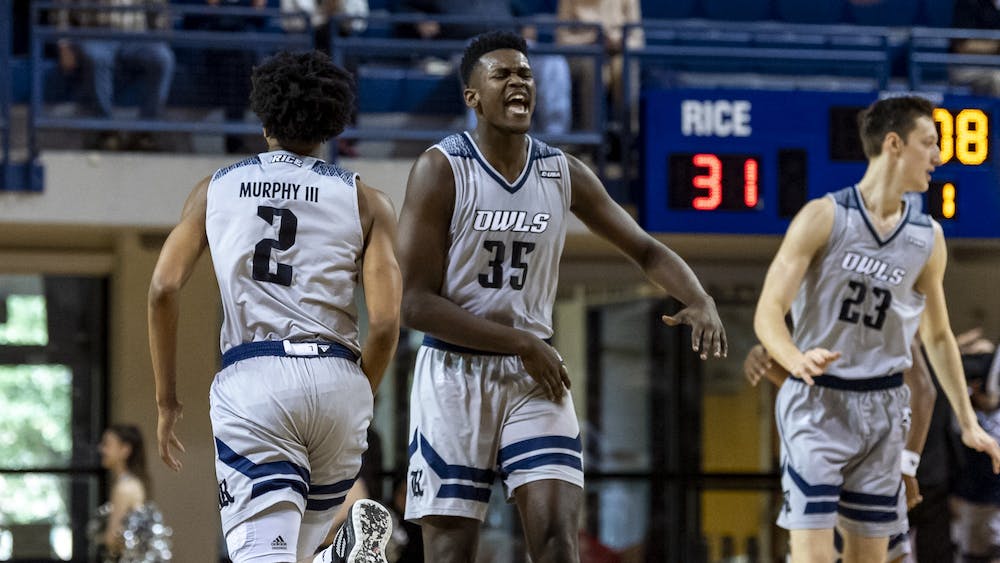 Rice men’s basketball will begin the Conference USA tournament tonight when they take on Florida International University at 6:30 p.m. in Frisco, Texas at the Ford Center at the Star. The Owls have already seen the Panthers once this year, culminating in a 92-78 Rice victory back in January.

Sophomore guard Trey Murphy III said there are a few key areas that Rice needs to focus on in order to win.

“Last game [against FIU], we didn’t turn the ball over much and we probably need to do that same thing again,” Murphy said. “We also need to be mindful of shot blocking at the rim, because they have the leading shot blocker in the nation. We just have to make sure we’re patient and not getting sped up by their chaotic defense.”

That shot blocker that Murphy mentioned is Osasumwen Osaghae, a 6-foot-9 senior who leads the NCAA with 116 blocks this season, 11 more than the next closest player. During their game in January, the Owls had only one shot blocked by Osaghae. That was in large part due to a strong shooting performance: Rice shot 53 percent from the field and 40 percent from three-point range. Head coach Scott Pera said that to break down FIU’s defense, Rice should avoid taking bad shots.

“[FIU] thrives on pressure defense,” Pera said. “We need to do a great job of taking care of the ball, being aggressive offensively, and taking the right shots without turning the ball over.”

On the whole, the Owls’ season has been very up-and-down. They ended the season at 15-16, good enough for the 12th and final spot in the C-USA tournament, but also lost eight of their first nine conference games: the only game they won in that stretch was against FIU. According to Murphy, the team’s end-of-season stretch was not terrific.

“We went through a rough patch in January,” Murphy said. “After the preseason we were looking really good, and then we just went into a hole. But we were able to dig ourselves out of it and make it back.”

Part of that rough patch was due the loss of senior forward Robert Martin, who was sidelined on Jan. 4 against Western Kentucky University and didn’t return until Jan. 23. According to Pera, the team struggled without injured players.

“We lost some tough close ones [in conference], but as the team continued to grow and mature, we were able to handle adversity a little bit better,” Pera said. “We played a long stretch there without [Martin], as well, but once we got everyone back and healthy I thought we played pretty well.”

The Owls were able to turn it around in February. Once the calendar turned, they rattled off three wins in a row. Murphy said the team realized it needed to shore up itself, which enabled the Owls to turn their season around.

“Everyone gathered together and stepped up their play,” Murphy said. “We realized we needed to have some urgency because it was possible that we wouldn’t win another game, but we just had to pick it up as a unit.”

“Continuing to improve defensively is something that has been a bit of a roller coaster [this season],” Pera said. “But I think we’ve been more consistent with that lately and hopefully it will carry over into the conference tournament.”

As Rice heads into the conference tournament for the second year in a row, Murphy said the team is ready to compete.

“Our biggest strength is that when our defense is really humming, it’s hard for teams to score,” Murphy said.  “And if we’re clicking on offense, then we’re a really dangerous team; in my opinion, one of the most dangerous teams in the conference. If we get on a hot streak in the tournament, we could really make some noise.”

The Owls will look to start making that noise in the tournament tonight, when they take on FIU at 6:30 p.m. in Frisco, Texas.