Growing up on campus: when Rice is a personal playground 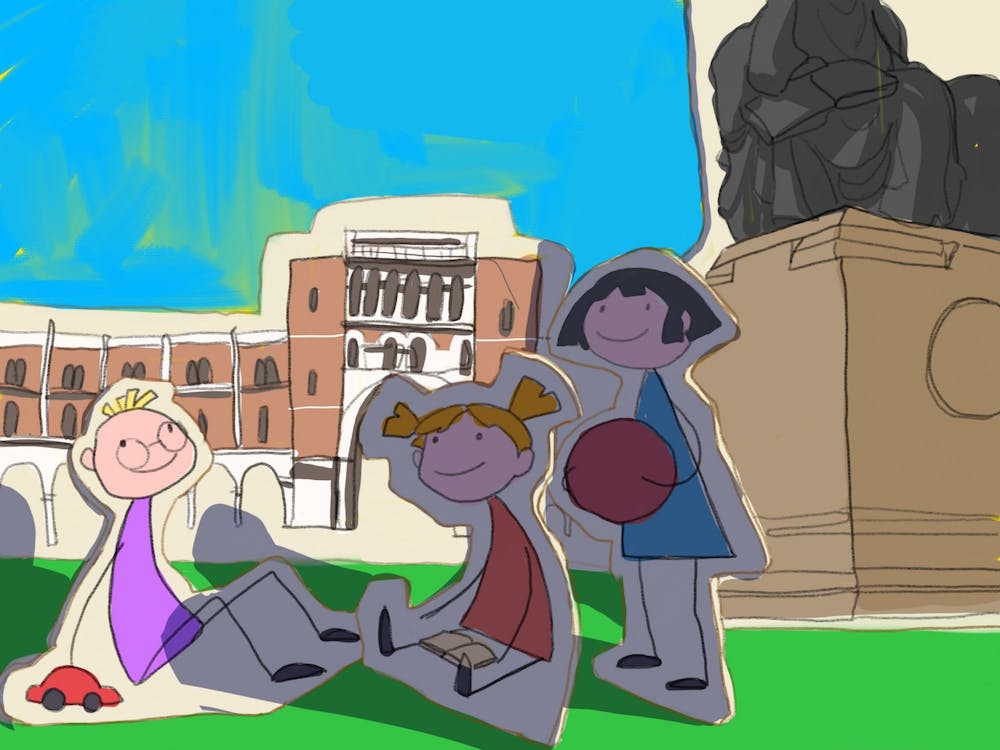 College students often consider their university to be their home away from home. But Rice is also home to a unique set of residents even younger than freshmen. Introducing some of the children living at Rice: Eleanor, Olivia, Owen, Mae, Carter and Ellery.

Duncan magisters Caleb and Brandy McDaniel have been at Rice for eight years and transitioned into the magister role five years ago. Their daughter Ellery (13) remembers finding out that she would be living at Duncan when her parents became magisters, but Carter (9) has few memories before Rice.

“I don’t really remember anything from before,” Carter said. “So I’m used to being around a whole bunch of people now.”

Ellery said Carter has made friends with every person he’s ever met. She, on the other hand, hasn’t gotten to know many of the students at Duncan.

“I’m an introvert,” Ellery said. “People aren’t really my big thing… [but] I have my close friends, and none of them are college students.”

Allison Leedie and Ian Schimmel, RAs at Jones, are in their seventh year at Rice. Since their son Owen’s birth, Leedie said Owen has had a community to play and interact with — a community responsible for Owen’s name, too.

“I was pregnant my third year and [Ian and I] didn’t know what we wanted to name our kids,” Leedie said. “We were looking for ideas ... and didn’t find out the gender of our kid … so we did a bracket.”

Stipulating that they weren’t bound to use the winning name and that suggestions could not be names of current Jones students, Leedie said students voted through rounds of names before settling on Owen as the winner for the boy names.

“In our heads, we were sure we were having a girl,” Leedie said. “We had a boy, and were so surprised that we said ‘oh, well Owen was the winner. We like that name.’ So Jones named Owen.”

Spending the majority of their time at Rice, campus kids and their parents see tons of positives about growing up on a college campus.

Jaime and Chris Mize started their first year as RAs at Brown this fall with their daughters Mae (5) and Eleanor (3).

“One of our initial fears [was that] we’d feel like we were kind of a nuisance to the students because kids are crazy,” Chris said. “But the students have been really great.”

Lesa Tran Lu and Eric Lu, RAs at Sid Richardson and parents to Olivia (3), are expecting another child at the end of March. Tran said they are not as freaked out this time around.

“Olivia is everyone’s little sister,” Tran said. “So sometimes I don’t feel as guilty about having a kid and spending a lot of time with the little one instead of [Olivia] … because we have a lot more help here.”

“[Olivia] just plays around with everybody … and everyone loves playing with her,” Eric said. “Her being on campus has actually been a good thing because she’s integrated really well with the Sid community.”

For Leedie, the makeup of the students is in and of itself a benefit of raising Owen at Rice.

“The diversity of Jones is nothing you could … make up in real life,” Leedie said. “Just being exposed to all these people from different places and backgrounds … [is] amazing.”

Leedie acknowledged that living on campus comes with its set of challenges.

“There have definitely been times when I’ve had to fireman-carry [Owen] out of the commons,” Leedie said. “He’s kicking and screaming and I’m just like, ‘this is kind of embarrassing.’ Normally, when that happens in public, you don’t know everyone around you.”

On top of balancing responsibilities as an RA and professor, Tran said the toughest part is getting her daughter to focus with so much going on around her.

“As you can see, [Olivia] thrives on being around people,” Tran said. “So if we ever need to discipline her, or we need her to focus, it’s hard for her.”

According to Ellery, Rice students themselves have quirks that make the experience growing up on campus an atypical one.

“It’s definitely not normal [living on campus],” Ellery said. “It’s kind of hard to explain to your friends that … you wake up at three in the morning because college students are practicing their harmonicas [for a Beer Bike jack].”

The parents and children alike recall important bonds with other kids on campus as well as with people in general.

Generations of Rice students have impacted Ellery and Carter’s life in a positive way, according to the McDaniels.

“I can remember … the first graduation, Ellery was close with a student, Drew,” Brandy said. “At graduation … [Ellery] said ‘Mom, why do they call it a celebration if I feel sad?’ The first few years, they didn’t understand that students would always be leaving.”

In addition to his friendships with students, Carter said he appreciated his relationship with Housing and Dining staff and is a fan of the servery food.

“Every winter break, we make special flavored popcorn and bring it to the H&D staff,” Carter said. “I go [to the burger station] almost every day … [so I] made such a relationship with the burger guy.”

While the Duncan children are older, the Jones, Brown, and Sid Richardson kids all know each other from daycare. Leedie said Owen, Eleanor and Mae are a small scooter gang. Eleanor said she plays with Owen a lot.

“And of course, we throw things,” Mae added.

To express her gratitude for the relationships she has with students at Sid, Olivia creates her own Christmas list.

“Last year, [Olivia] chose her thirteen top Sidizens and chose presents for all of them,” Tran said.

Leedie, for one, was touched by the compassion of Rice students towards Owen.

“The way that [people] interact with Owen and treat him with such kindness … makes me cry,” Leedie said. “Watching them care for him the way they do is very powerful.”

Although not all of the kids had the attention span to answer every question, some did respond when asked whether they liked their home college.

“Playing at Jones [is my favorite thing],” Owen said.

“Here it goes again,” Mae said. “I want to watch TV! Can you leave so we can watch TV?” Mae said.