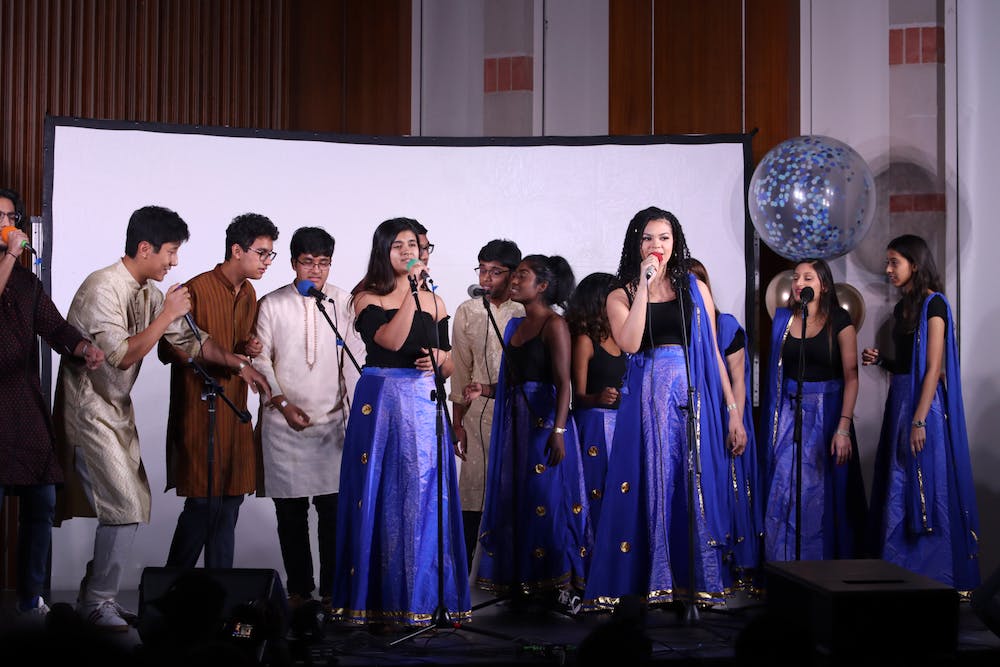 Basmati Beats’s journey to the top hasn’t been easy — along the way, they’ve struggled to find resources on campus similar to those available to groups at other universities. But on Feb. 22, the group worked past these challenges to win the first place prize at Gathe Raho, the University of Iowa’s national South Asian a cappella competition.

“Our practices are frequent and grueling, so when the moment comes, we’re beyond excited to perform and leave it all on the stage,” Ghei, a Wiess College sophomore, said.

All their time and effort ultimately paid off in their win among five other groups.

“Winning was obviously the highlight of this competition and I think almost all of us cried on the stage when it was announced. It was like a dream,” Ghei said. “We also were asked to perform at the airport by the Southwest [Airlines] employees, because they saw our trophy, which was so fun.”

“It truly felt amazing to win the solo award because there was another non-South Asian soloist who we all thought was really incredible … so [winning] really validated the amount of soul and emotion that I worked to put into my solos,” Fagbemi, a Hanszen College sophomore, said.

Although Basmati Beats won two major awards at the competition, Fagbemi said that the highlight of the trip was spending time with the group afterward.

“After the competition, we all went to [a team member’s] house, where we were staying for the night, and we just celebrated and hung out until nearly 5 a.m.,” Fagbemi said. “I think that was my favorite part of the whole Gathe Raho experience.”

The group includes members from all backgrounds, including Akash Majumdar, a Masters of Business Administration student. Majumdar, who revived the a cappella group Vandy Taal at his undergraduate university, Vanderbilt, said that he found Basmati Beats on Facebook, listened to their Spotify and reached out about joining.

“I’m in the business school, so the typical age of my classmates isn’t around what mine is. I turn 24 in September,” Majumdar, the music director of Basmati Beats, said. “I found a similarly aged community in Basmati Beats and made a lot of really good friends in the team.”

As music director, Majumdar is responsible for picking and mixing the songs that the group will perform. Majumdar said that the process is democratic and said that this year the group has emphasized singing songs in Tamil and Bengali in addition to more commonly used Hindi songs.

“We typically start with the one song that we’re all really excited with [and] then find a South Asian song that matches the tempo, matches the theme,” Majumdar said. “And [then we’ll] see if there’s a cogent way to make them work together.”

Many members, like Majumdar — who has been on the team since 2018 — stay for multiple years. Bharathi Selvan (Hanszen ’19), who joined in 2016, said that the team has improved significantly over the past three years.

“I was on the team when we first competed. I would’ve never thought that in three years, we would be a team that not only placed, but also won a competition,” Selvan said. “I also feel that Basmati Beats has grown to be a team that is taken seriously at these competitions and by other more established teams … We can no longer say we’re the underdog, and that is something I wouldn’t have expected if you asked me freshman year.”

However, team members say that their rise to the top has been filled with obstacles, in particular the small amount of resources available to them in comparison to the teams they compete against.

While groups at other universities have rehearsal facilities with instruments and sound equipment, Basmati Beats has to reserve spaces at the Gibbs Recreation and Wellness Center or public spaces at residential colleges, according to Ghei. According to Fagbemi, these difficulties have put Basmati Beats at a disadvantage for competitions.

“While the other [teams] at the Gathe Raho competition were able to consistently rehearse at their campuses with the necessary equipment and facilities, we had our first run-through with the piano at the competition,” Fagbemi said.

Additionally, Basmati Beats has to fundraise for the majority of their expenses, according to Ghei. Ghei said that the lack of consistent funding for travel and competitions available for clubs makes it harder for Basmati Beats to attend national competitions and bring recognition to Rice’s arts and music.

“We’re a team from a school of [around] 4,000 undergraduates competing against other huge state schools like [The Pennsylvania State University] and [University of California,] Berkeley,” Selvan said. “Many students at the competition we won either didn’t know where Rice was or hadn’t heard about Rice. Given that our success inevitably elevates Rice’s name in the musical sphere, I wish the Rice administration would support Basmati Beats more.”

Fagbemi said she feels that the success of Basmati Beats merits more support and recognition from the university.

“This year alone, we’ve won five awards, but [President David] Leebron didn’t even know we existed. [After Acapellooza this year,] he tweeted, ‘Who knew we have four (maybe five) a cappella groups on campus?’ and a member of our team had to tweet back that, yes, we exist, and we are an award-winning team.”

Selvan, the member who responded to Leebron, said that Basmati Beats’ success contributes to Rice’s image but the group feels unsupported by Rice.

“I don’t blame Leebron for forgetting about us — I’m sure it was unclear at Acappellooza how many teams there are at Rice,” Selvan said. “While I wish he had responded to my tweet or given a shoutout to Basmati Beats and our win on Twitter, the lack of response points to a larger issue of teams that aren’t club sports not getting funding and the arts at Rice in general not  being valued or funded.”

Despite these obstacles, Ghei said that Basmati Beats is looking ahead to their next project: working on putting out an EP on Spotify. This EP will be their third, following 2017’s Prakasa and 2019’s Sakti. In addition, they will perform at a concert in April. With all these events, Ghei said that it can get stressful and hectic.

“At the end of the day, however, all of the stress goes away when you’re singing with the people you love and acknowledging you’ve come so far with all your hard work,” Ghei said.