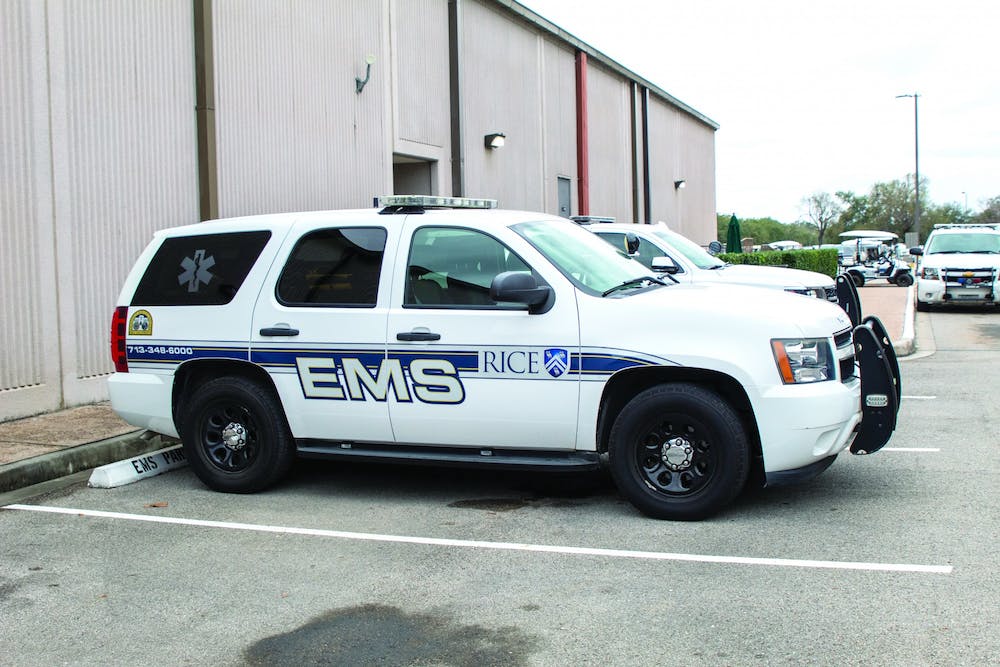 Following concerns that the university was putting a strain on Houston’s resources, beginning this spring semester, the Harris County Emergency Corp will be hired for a trial period as the campus’s ambulance service from 9 p.m. to 3 a.m. every Friday and Saturday night.

Rice University Police Department police chief Clemente Rodriguez said that although there hasn’t been an abnormal uptick in call volume, these periods are typically busier for the city as well.

For the Rice campus and visitors, HCEC transports will cost the same as normal transports, and ambulances are hired at an undisclosed rate according to Rodriguez and Rice Emergency Medical Services director Lisa Basgall. The Houston Chronicle reports that the base cost for Houston ambulance transports increased 70 percent in 2019 to $1,876.40 plus $14.36 per mile. Rice University student insurance covers 75 percent of ambulance transport costs, according to the Rice Aetna portal, but Basgall said that typical insurance coverage varies widely.

Although Justin* doesn’t recall many details from the night of their ambulance transport, they remember receiving help from emergency staff and arriving at Memorial Hermann Hospital in around 5 minutes. (Editor’s Note: The Thresher has granted this student anonymity because of the legal implications of their comments related to an underage drinking incident.)

“I remember snippets of people trying to help me, throwing up a little, EMS was there, and I was lying on the ground so out of it,” Justin* said. “I wasn’t really thinking about the cost at that point, I just wasn’t feeling too good. They just took my insurance card and I was like oh, insurance will cover everything. Turns out they won’t cover everything.”

Justin* ended up paying $300 after insurance for a $2000 ambulance bill. Justin* said he is grateful and satisfied with the medical care they received but believes a short trip to the Medical Center didn’t merit the cost.

“I think the ambulance helped but I feel like someone else could’ve driven me across the street and I wouldn’t have had to spend $2000,” Justin* said. “I was not really [worried about it] because my parents were the ones who paid for it and so they were more worried about me than they were worried about the money. But for someone who would be impacted more, they would pay for an ambulance ride they didn’t even want to have.”

REMS, the campus’s first responder agency, does not provide ambulance transports to the hospital as part of their medical care. The organization has frequently utilized HCEC ambulances as a supplementary transport service for special events such as commencement, publics and sporting events for the past 10 years, but this semester will be the first time that HCEC’s transport services will be hired on a weekly basis.

“There hasn’t been a change in our call volume, we’re not seeing any different trends, but the weekends and evenings tend to be busy for us, with things like Powderpuff injuries or sporting events that come to campus,” Basgall said.

REMS and RUPD communicated with the Office of the Dean of Undergraduates, Rice Student Health Services Office and the Office of the Vice President over the course of six months to introduce this program. According to Basgall, this decision was primarily made to reduce ambulance response times and strain on the Houston Fire Department’s resources, though HFD raised no complaints, according to Rodriguez.

The Thresher reached out to Basgall for anonymized data on the variation of transport volumes throughout a week, but Basgall declined to provide that information on grounds of patient privacy. The REMS homepage reports that throughout the 2018-2019 academic year, HFD transported 93 of the 650 REMS calls. The goal of having a readily available ambulance service, Basgall said, is to streamline the process from emergency call to the hospital.

“Here on campus, REMS is the first responder, so we’ve already sifted out which patients don’t need transport to the hospital,” Basgall said. “If we call 911 and say we need an ambulance to come, sometimes we get fire apparatus, sometimes we get ambulances, sometimes we get both of those things, so it can take 10-15 minutes to arrive. Having [HCEC] here means that we don’t have to go through those additional steps and we can transport faster.”

Statistics from the REMS website show that the most common REMS call types are related to orthopedic injuries and alcohol incidents. The Thresher reached out to Dr. Jessica McKelvey, director of Rice Student Health, for comment on whether decreasing response times through HCEC would have an impact on common REMS calls but McKelvey could not be reached by time of publication.

When Will Rice junior Priscilla Huh got concussed last year and twisted her ankle on Jan. 26, she opted to have her friend drive her to the emergency room for several reasons: She said she believed her injuries weren’t time sensitive. She knew that ambulances were expensive and appreciated the comfort of having a companion nearby.

Most of REMS calls ending in transport, 162 of the 262 last year, involved transport to the ER in a privately owned vehicle rather than ambulance, according to the REMS website.

“Unless there’s a huge spike in injuries or transport needs, I don’t think people are going to choose to take the ambulance,” Huh said. “At the ER, a lot of times you have to be there for a long time. Having someone to talk to and be there with you is comforting.”