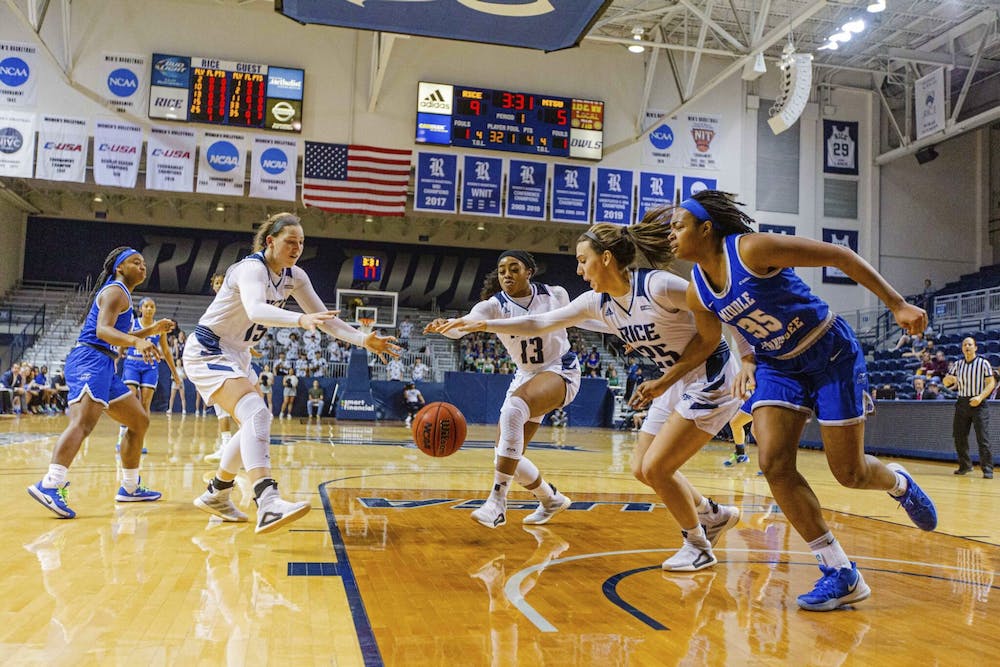 According to junior center Kendall Ellig, the team is not fully satisfied with its recent performances.

“There are ebbs and flows to a season,” Ellig said. “Obviously we would have liked the ending to be a little different, but I think it just gives us some really clear ideas of what we need to work on to get better.”

Against Old Dominion, Rice senior guard Erica Ogwumike led the team with 26 points and a season-high 18 rebounds. Junior center Nancy Mulkey added nine points and eight rebounds. But the Monarchs were able to open the overtime period with seven straight points, and the Owls were unable to make up the difference before time expired.

Against Charlotte, the Owls were unable to get anything going on offense, shooting just 29 percent from the field. They were able to keep the game close with their defense, but Charlotte was able to break through in the third quarter with a 16-6 run that gave them the lead and eventually the game. Schwartz said the Owls lost their groove near the end.

“I think it was more of our misses and our lack of execution during plays,” Schwartz said. “We just didn’t really play our game.”

Despite their recent losses, the Owls are still in excellent standing in C-USA. They are 11-2 in conference play and just one game behind Old Dominion with five games remaining in the regular season. The Owls will face Old Dominion again in Rice’s season finale, this time at Tudor Fieldhouse. According to Langley, the fact that Rice will face the Monarchs at home is important.

“We had five away games over our last seven [games]; that’s pretty intense,” Langley said. “I think being in front of our crowd again, and having the comfort of our own facility, is always nice. It will help us get back to kinda doing things the way we do them.”

To start getting back on track, Rice will prepare for a North Texas team they beat 67-52 earlier this month. Besides winning handily, the Owls were also able to hold the Mean Green to just one made three-pointer on 10 attempts, which Ellig said was crucial to the win.

“[North Texas] is a better shooting team than they have been in the past, so it’s going to be important for us to protect the three-point line like we did last game,” Ellig said. “Aside from that, we just have to continue to grow on offense and be creative, and that will put us in a good position to win.”

Rice has excelled on defense this season, allowing just 56.5 points per game, good for No. 25 in the nation. The Owls have also kept opponents shooting just 35.5 percent from the field, and 26.8 percent from three-point range. According to Schwartz, the Owls are in a good spot moving forward.

“We all see that we have lots of games left to play, and we have a lot of room to grow,” Schwartz said. “We have to be ourselves [against North Texas] and grow from last week. Like Coach always says, ‘the next game is the biggest game.’ So we’re just focused on what we have to do to be our best and win the next game.”

The Owls will face off against North Texas at Tudor Fieldhouse on Thursday, with tipoff at 7 p.m.