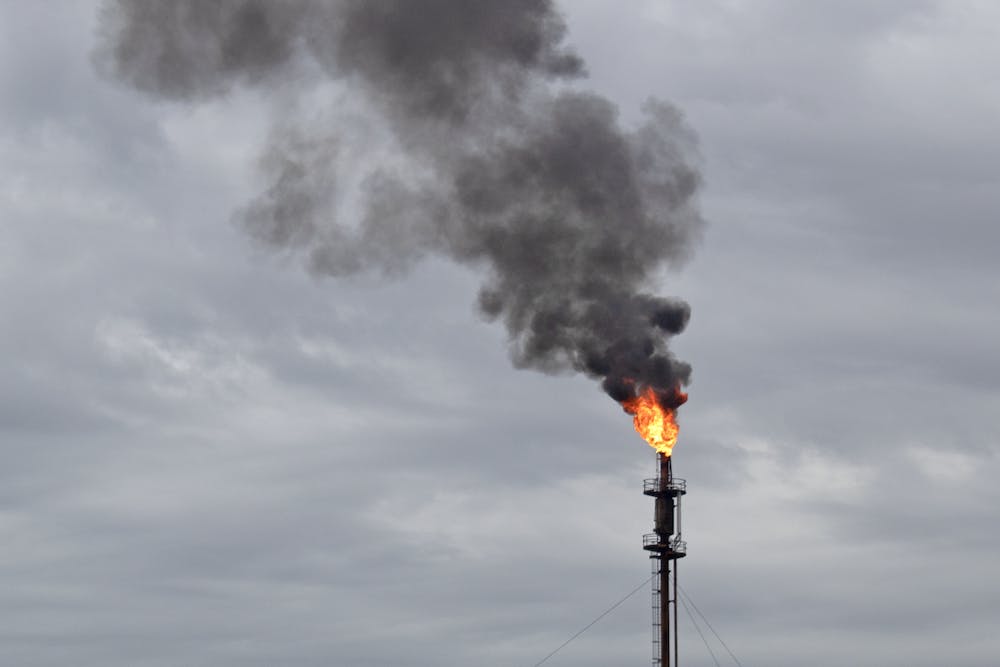 “Flares happen whenever there’s a product that couldn’t mix. They burn it. It depends on what they are making that day. I mean, it could be a gasoline mix, it could be an oil mix,” Flores said

On a "Toxic Tour" of Houston, led by the Houston Air Alliance, 15 students visited gas-flares, a polluted section of the Buffalo Bayou and a neighborhood encircled by refineries. The event was hosted by the Green Dorm Initiative and wound through the Second Ward, crossed Galena Park, touched the Buffalo Bayou, circled back toward the Fifth Ward and ended at Manchester.

Sam Holloway, a Brown College junior and one of the incoming campuswide Head Eco-Reps, said he organized the Toxic Tour in hopes of extending the educational efforts of the GDI.

“It’s really striking to go on the Air Alliance tour because you can see a visual representation of the pollution and how widely these things are spreading out,” Holloway said.

At the section of the Buffalo Bayou bordering Pasadena City, the historical site of Mexican general Santa Anna’s capture, some visitors to the waterway were fishing; nearby, a sign cautions against eating fish caught in the bayou. Two years ago, the Bayou was flooded with gasoline after the roofs of two floating-roof tanks capsized during Hurricane Harvey, according to Juan Flores, a coordinator for Air Alliance.

“I’ll talk to them, I’m like ‘hey, are you guys eating the fish?’ and they’re like, ‘no we’re not,’ but I can see their cooler full of fish,” Flores said, sharing a past incident. “I mean, to each their own. It’s up to them, but you should not eat this fish.”

On the border of Manchester, five miles east along the Bayou, one paved road separates the residential homes on the edge of the community from the industrial plants of the Valero Houston Refinery. The facilities loom over the nearby Hartman Park playground on the border of the Manchester neighborhood, where 40 percent of its residents live in poverty as of 2017, according to Flores.

“In this community, they’re right in the middle of the [Valero] company,” Flores said. “This is one of the worst areas to live in because the pollution could sometimes be off the charts. This is Hartman Park. I’m sorry, but I wouldn't want to have my kids playing here.”

According to Flores, Valero has been slowly buying out residents who reside in the streets bordering its facilities, shrinking the neighborhood one crosswalk at a time. Within 20 to 30 years, Flores said, most Manchester residents will be gone. One house, on the edge of a street bordering the plant, is wedged between Valero facilities on three sides because its owner refused to sell his home. At the time of publication, Valero could not be reached for comment.

“He doesn’t want to sell. He said he’d rather stay there until he dies,” Flores said. “There are refineries behind that house, behind that house you see little pipes going over the property. He’s the last guy standing [on the street].”

A number of sites around Houston have been termed sacrifice zones, according to Dr. Zoe Wool, an Assistant Professor at the Department of Anthropology. These zones typically house residents of color and low socio-economic status, she said, bringing the toxicity of railways and industrial centers to the doorsteps of vulnerable communities. In Manchester, 98 percent of the city’s 2000 residents are Hispanic.

“The idea is we want this industry in Houston because it produces money for Houston,” Wool said. “But some neighborhood is going to have be sacrificed on the altar of capitalism.”

The propylene gas explosion last Friday at the Watson manufacturing plant in Northwest Houston that killed two people also damaged dozens of homes that Houston’s zoning laws allowed to be placed near the plant, according to Wool. Although propylene is not regulated by the EPA, Wool said exposure to the chemical can cause depressive effects on the nervous system, such as amnesia and coma.

“Zoning is part of what makes Houston really particular,” Wool said. “We have things like this plant in essentially residential neighborhoods that are surrounded by industrial sites. That’s quite unusual.”

Houston’s Fifth Ward is home to the Englewood rail yard, where a Union Pacific plant has been soaking wooden beams in cancer-causing creosote as part of its rail-tie manufacturing process, according to Wool. Although the plant is no longer uses creosote, the accumulation of the chemical in the soil has likely contaminated the drinking water of nearby residents, according to Flores.

“You know, this lady came out and said ‘I have cancer. My husband died of cancer, not even a few months ago. My neighbor right there has cancer. She has cancer,” Flores said. “She had these banana trees in the back. They were half dead.”

Proving that an area is a cancer cluster requires extensive documentation and evidence, Flores said. Last week Texas Department of State Health confirmed a higher level of several cancers in the affected area, a confirmation of what Flores says the community has suspected for over twenty years. Union Pacific will be under investigation by Harris County as to whether its handling of the contamination violated state environmental laws.

“There was a family there called the Washington family. And they’re all gone,” Flores said. “Most of them died of cancer. We knew there was a cancer cluster there, but it took twenty, thirty years [to be recognized].”

Shortly after the Soto Ready Mix concrete plant sprung up in the Acre Homes neighborhood Air Alliance Houston began receiving reports of white, concrete dust over their cars and brushes. When the company sought to expand its operations to a neighboring street within the community, residents fervently protested the permit, Flores said.

“The people in the area were very upset. They called us, we got involved, we helped some other people involved and we protested the permit. Mayor Turner, Sheila Jackson Lee, everybody got involved in this. And we put so much pressure on them that they had a hearing coming up... and they just dropped it.”

Rachel Johnson, a junior at Duncan College who went on a Toxic Tour led by the Texas Environmental Justice Advocacy Services last semester, said she was most surprised to see the gas flares, which were visible from the bayou.

“We can smell it and that was just really eye opening because there are people right there fishing,” Johnson said.