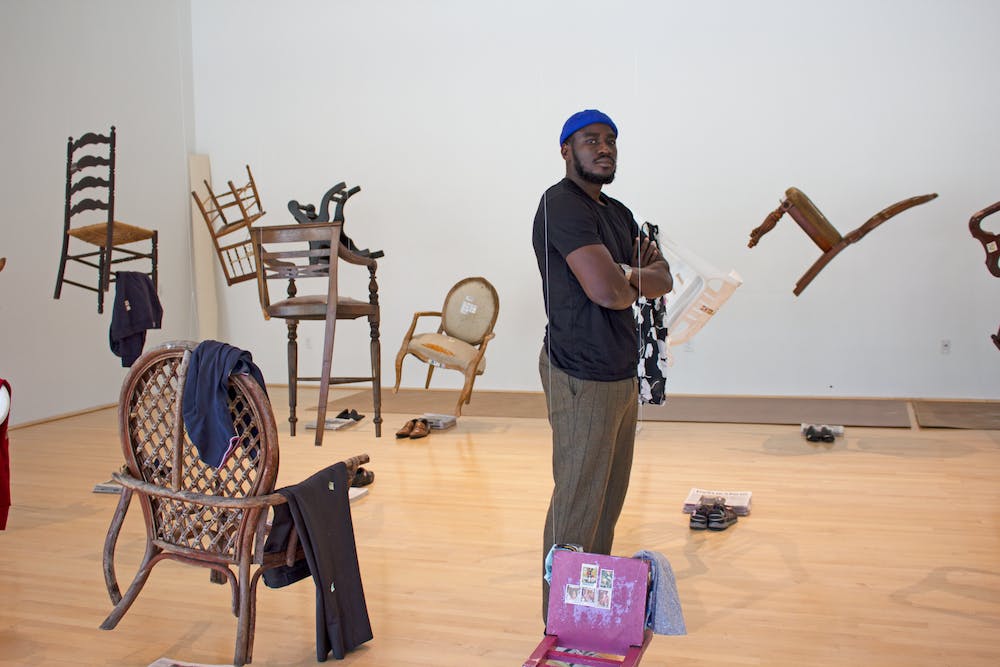 As part of the opening reception for the Moody Center for the Arts’ “Radical Revisionists: Contemporary African Artists Confronting the Past and Present,” Serge Attukwei Clottey will unveil the site-specific installation with a community-based performance this Friday at 6:30 p.m.

“Softening Borders” occupies the Moody’s central gallery space, a cavernous white hall with a wall of floor-to-ceiling windows. Through the glass, outside passerby might be tempted to do a double-take of the myriad of wooden chairs suspended in the air at every angle. Draped over the chairs are various coats and shirts, some of which are adorned with mail stamps. On the ground, shoes of all sizes and colors are planted alongside neatly folded newspapers that announce poverty and struggle. At first glance, the work seems impassable — a minefield of objects eerily displaced from their owners. But Clottey leaves just enough space for walking, inviting you to traverse the unknown as a microcosm of migratory journey.

Based in Accra, Ghana and working internationally, Clottey contemplates philosophies of migration, immigrant identity and material culture with works that assemble and repurpose everyday objects into thought-provoking new forms. With installations around the world and critical acclaim at his feet, Clottey explores political and personal narratives rooted in a tradition of trade and migration through an Afrocentric lens. With “Softening Borders,” Clottey offers disorientation, confusion and instability as the keys to an authentic understanding of migration.

What inspired this piece?

Clottey: I’m interested in migration, not only as in human but as in objects and how objects migrate and change their form and value. So, coming here I’m looking forward to working with available material that I can find here. And I’m interested in chairs because chairs represent power, chairs represent positions. I believe that some of these chairs are very important because it holds history of people. I’m interested in exploring that aspect by installing them from the ceiling because it talks about unstable power, especially in politics, and how power changes over time.

This exhibition has multiple layers of addressing issues of migration. Some of the shoes have been back and forth in different parts of the world and they are here right now. The stamp represents a system that grants possibilities for people to travel around the world like visa. For me, stamps represent visas because they have been issued to allow information to circulate around the continent, so I use the stamps as reference to visa for traveling.

What are the newspapers supposed to symbolize?

The newspaper has so much information about what is happening. I think it’s something that represents power in a way just like the chairs but it’s used for spreading messages across. And especially the front [page] — the images can be very intimidating. A lot of migrants in other countries sell the newspaper which talks about them. But you have to [sell to get that money to] survive. Whatever the newspaper says about you, you don’t have to care about that, you have to make money. I experienced that in Austria where there’s a newspaper which talks about African migrants but then there’s African migrants on the street selling those newspapers. It’s very difficult because you don’t have options. So a newspaper represents information about what is happening and it can be truth or lie.

Through the lens of your own travel, how has creating here in this space been different from what you’ve done in Ghana?

In Ghana, I work with a lot of plastics, not so much with wood. I think wood is something that I am looking forward to explor[ing] because I recently worked with broken boats. A broken boat is very symbolic because it is for navigating places [...] and that is reference to the history of colonialism. Boats are very symbolic of migration so I think wood, for me, speaks more of a physical channel of migration.

How do you see your work in relation to the other artists featured in the exhibit? What do you hope your work contributes to the exhibit as a whole?

A lot of artists’ works are based on migration, environment as well and history as Africans. I think the link is that we are interested in exploring migration from different artistic backgrounds and expressions based on [our own] experience. I live in Africa, I’m based in Ghana so my idea of migration informs my travel within Africa, America and Europe as well because I see the experience quite [differently than if I were to] live in the U.S. only. I explore migration in different spaces differently.

Whereby I go to a neighboring African country, I don’t feel much of the migration struggles [that I feel] traveling to the U.S. When I was coming to the U.S. for the second time, I was denied a visa and I didn’t understand because I had been here a couple of times and contributed a lot by working with universities in the U.S. So, that [experience] is something that informs my work that I’m producing now because I am using my stamps for coming to the U.S. with entries as part of the work. So that people see the visibility and my contribution toward America.  And I think it’s a system that is built to oppress. But what I’m interested in [is], how do I speak out this situation through my work? So whatever I go through, I still present my ideas and the challenges I face.

Do you notice differences in the way American audiences receive your work as opposed to elsewhere in the world?

Well, with audience it changes depending on the space. My first installation which was about migration and displacement, it was in New York in 2015. And I had a lot of people, mostly Africans living in the U.S., who feel more related to the work because of the ideas and materials they relate to. I think that the U.S. is multicultural, so everybody has a story. The more I push up with these ideas and expanding [them], I think the U.S. has played a lot of role by giving me a space to show my work and that influences the way I think and see things.

What are your feelings about Houston and Rice so far?

I think that this particular exhibition in residence is very important to me because I’m allowed to express myself. This is my first time here, so I wanted to find a way to connect to Houston, to Rice, based on whatever materials I find within and also having some guys helping install the work. I saw pictures of the space but now that I’m here, the work has evolved. So I think [this has been]  a very good opportunity to expand my work. And looking at the gallery space, it’s huge. I’ve never done this kind of installation and I realize that this is the best place to start. The space is very visible because you can see from outside and it’s very welcoming unlike in other spaces like a museum space which is covered and you have to go through different places to get to the space where the work is shown. But this is very visible and you walk by and see this exhibition - it’s questioning you to come closer. It’s urging you to take action about what is in the space. I’m very excited about it.

So, would you agree that the windows and the ways in which the space is different from a museum was part of your creative process in creating the work in this way?

How will the performance look?

I use myself as an object in the work and I represent my work in a way that also represents labor and how migrants contribute so much to the development of all these destinations they find themselves in. I’ll be doing a performance by cleaning the space with a mop and water, just cleaning. And the collaborators that I’m working with will be dressed in fancy clothes, just hanging around drinking wine, while I’m working and cleaning the space. I want this space to feel very intimate and intense in how people face challenges. For me, it’s about the power relationship and how a lot of people work so much to be able to gain citizenship but it still hasn’t happened. [Migrants] get married to foreigners and have kids but still face these challenges. I’m looking forward to seeing how this space creates an intense situation [for the audience].

You’ve said tons of complex things about your work that I know it’s hard to say succinctly, but if there is one thing or one concept that you hope your audience walks away with, what do you hope that is?

The labor of a migrant.