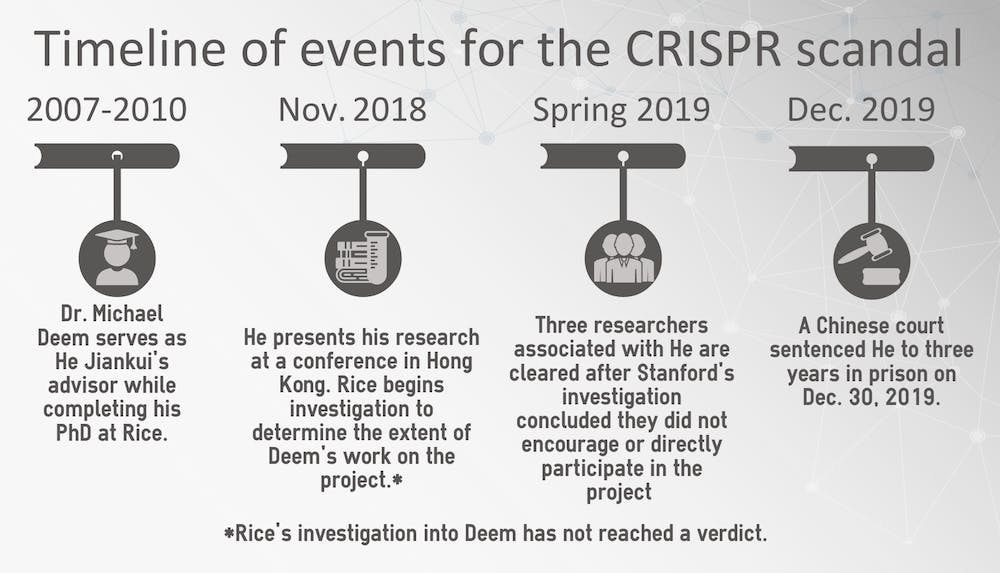 A Chinese court sentenced He Jiankui (Ph.D. ‘10), who revealed that he had genetically-edited twin girls last year, to three years in prison on Dec. 30, 2019. The questions surrounding his PhD advisor, Rice University bioengineering professor Michael Deem’s involvement in the He’s experiments, remain unanswered. In November 2018, Rice began a full investigation into Deem’s role in the research.

According to the New York Times, He plead guilty to forging documentation from ethics committees approving the study, which he used to recruit participants. Additionally, Chinese media outlets revealed his work on a previously undisclosed third child.

Since Rice’s Nov. 2018 statement, no more public updates on the internal investigation of Deem have been given. The Office of Public Affairs declined to comment for this article.

In the original statement, Rice stated they had been unaware of the project.

“This work as described in press reports violates scientific conduct guidelines and is inconsistent with ethical norms of the scientific community and Rice University,” the statement read.

Meanwhile, Stanford University’s investigation cleared three researchers associated with He in Spring 2019 after concluding they did not encourage or directly participate in the project, according to the New York Times coverage.

Dr. Christopher Scott, professor of Medical Ethics and Health Policy at Baylor College of Medicine, studies ethical, legal, social and policy implications of biotechnologies similar to the ones He used. Scott formerly taught a required research ethics course to NIH grant recipients, and also mentioned that he discussed He’s project with an ethics class at Rice last fall.

“The thing that is troubling about the China case is that it’s not a China ethics problem, it is an international problem,” Scott said. “So, the question from an ethics point of view is what are the professional and ethical obligations of those folks, who have either direct knowledge of intent or knowledge that the experiment was conducted, to report this fellow?”

A Chinese scientist associated with the project claimed Deem was “more than just a bystander”, according to an article posted on STAT news in Jan. 2019. The study’s manuscript lists Deem as an author. After He announced his work at a conference in Hong Kong in Nov. 2018, Deem told the Associated Press he had met the twins’ parents. According to the Houston Chronicle, however, he attempted to remove his name from the paper after it was sent to journals such as Nature. The study was ultimately rejected and never published. Deem had served as He’s advisor when he completed his PhD at Rice between 2007 and 2010.

Deem did not respond to requests for comment at the time of publication. Two other bioengineering faculty members also declined to comment.

When it comes to genetic editing, Scott said the “unknowns and risks” of these experiments differ from administering a new drug to a patient or implanting a heart device.

“These are genetic effects that are felt, carried for life, and also carried in heritable ways to generations,” Scott said, “There has to be a commitment to understanding these sorts of things, how you follow these genetically-edited kids through adulthood, and later their children, and their children’s children — a lot of unknowns.”

Dr. Elizabeth Brake, a professor of Philosophy at Rice, taught “Topics in Medical Ethics” in Fall 2019. She is the Editor for the Journal of Applied Philosophy, and she also serves on the Editorial Board of Ethics.

“Given that the technology exists, it’s not surprising that someone has gone ahead and used it,” Brake said, “I think there’s a lot of concern in the fact that we need regulations in advance of people using this technology.”

Two other Chinese scientists connected to He’s work were also given prison sentences, according to coverage by the New York Times. If the project had resulted in a participant’s death, He’s sentence might have exceeded 10 years, according to the Times.

Scott said that despite the “uncomfortable and unfortunate” nature of He’s experiments and their aftermath, he believes they constitute a teaching moment.

“Even though this was an uncomfortable and unfortunate event, it's really one of those teaching moments,” Scott said “You have to ask the question institutionally, what can be done to up the level of ethical foresight in teaching universities and research universities? That's a hard question to answer.”