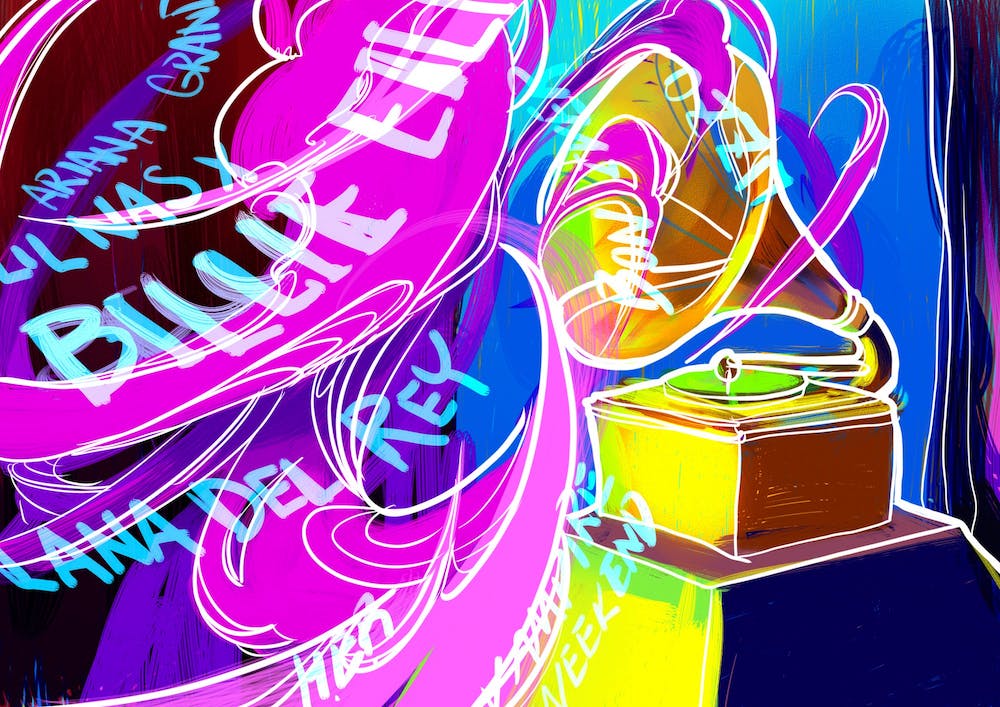 It’s that time of the year! Houston continues to deny us a winter and the Grammy Awards continue to deny any representation to rap music! Even as I gripe to my friends about snubs of my favorite artists, I will still inevitably tune into the 62nd Annual Grammy Awards this Sunday, Jan. 26 to watch bizarrely matched performances; the odds of an Ariana Grande/Aerosmith collaboration are terrifyingly high. In light of my obsession and criticism of the Grammys, I name the least expected nominations, biggest snubs, who I think should win and who I predict will actually win in the “Big Four” categories: Song of the Year, Record of the Year, Album of the Year and Best New Artist.

Song of the Year

Should win: “Truth Hurts” by Lizzo

Song of the Year remains a complicated award category for songwriting in a musical landscape that increasingly merges production and writing. This complication was highlighted by last year’s winner, “This Is America,” an incredibly produced track that intentionally lacks cohesive melody or lyrics. This year’s field is a mess, including a song from three years ago (“Truth Hurts”), a forgettable song from “A Star Is Born” (“Always Remember Us This Way”), and a Lana Del Rey album cut (“Norman Fucking Rockwell”) that breaks with category tradition of nominating singles. Meanwhile, “Sunflower,” the best written pop song of the year, somehow languishes in the Record of the Year category despite its catchy, breezy melodies and rapping grooves making it a worthy candidate for Song of the Year.

Despite questionable eligibility, “Truth Hurts” demonstrates a songwriting prowess above any other song in this category, from the killer hook to the most quoted lyric of the year (“I just took a DNA test…”). No other song has seeped as deeply into our collective psyche, Instagram comments or Orientation Week hype playlists this year. That said, recent concerns about Lizzo’s songwriting credits and the Grammys’ obsession with industry-insider teen phenoms will likely elevate “Bad Guy” to claim the award. “Bad Guys” painfully generic edginess and overall mediocrity convinces me even more that it will take the award.

Record of the Year

The record of the year is “Old Town Road.” That’s it; that’s the whole section.

When you think of 2019, you will think of “Old Town Road.” Outside of complete cultural dominance, “Old Town Road” boasts a hell of a backstory — a queer Black man raps over a Nine Inch Nails sample produced by a Dutch teenager that was then remixed by Billy Ray Cyrus in a symbolic act of resistance against racism in the country music genre. It’s exhilarating just to write that. Despite spending a whopping 19 weeks at the top of the Billboard Hot 100, the longest-running No. 1 in the chart’s history, the record itself remains a rush to listen to. Lil Nas X wails over banjos and raps about lean and cowboy hats only to be followed up by Billy’s talk of Fendi sports bras and Maseratis. Every second of “Old Town Road”’s 2:37 minute runtime is a joy, at least until your cousin plays it for the sixth time in a row. I do feel uncomfortable putting faith in the Grammys to recognize a deserving Black artist, but Lil Nas X’s smash has been undeniable this year.

The (hopefully) obvious winner of this category doesn’t preclude any unexpected or odd nominations — while somehow staying predictable. The Grammys continues its obsession with proving its own hipness by nominating last year’s breakout star H.E.R. and her track “Hard Place” — a well-written song with a basic rock ballad style production that hampers its status as a record but might have made it more likable to Grammy voters. The fact that H.E.R.’s “Could’ve Been,” a trappier, better record off her most recent album, was passed over points to the repeating fact: the Grammys snubs rap music. We had great pop rap records this year — DaBaby’s “Suge,” J. Cole’s “Middle Child,” and 21 Savage’s “a lot” to name a few — but none make an appearance in this category.

Album of the Year

Will win: “WHEN WE ALL FALL ASLEEP, WHERE DO WE GO?” by Billie Eilish

Least expected Nomination: “I Used to Know Her” by H.E.R.

Despite the streaming era turning most albums into nothing more than mere vessels for singles, “Album of the Year” remains the most prestigious award the Grammys has to offer. In one corner, we have a masterpiece  that acts simultaneously as a musical genealogy of Americana artistic expression in the digital age and a lyrical tapestry of visceral experience, Lana Del Rey’s “Norman Fucking Rockwell!” In the other, we have the logical conclusion of algorithmically-minded pop stars raised on more Soundcloud uploads than radio, Billie Eilish’s “WHEN WE ALL FALL ASLEEP WHERE DO WE GO?” While both albums have their merits, “NFR” operates on a higher plane of artistry than Eilish’s offering. But if the decades of Grammy award shows have taught us anything, it is that the Grammys have a fetish for snubbing generational albums, turning down highly acclaimed projects like Kendrick Lamar’s “To Pimp a Butterfly”, Lorde’s “Melodrama” and Beyoncé’s titular self-titled album in the last four years alone.

Any analysis of this category is incomplete without recognition of the Grammys’ complete lack of regard for rap music. Despite being the most culturally dominant force for a solid decade, the best the Grammys can muster is a nomination for Lil Nas X’s milquetoast EP “7.” It’s not even an album! Look, if there’s space for H.E.R.’s sophomore slump album, there’s space for rap. Especially in a year that saw commercially dominant artsy rap (“IGOR” by Tyler the Creator), energetic breakouts (“Baby On Baby” by DaBaby) solid traditionalist rap cuts (“Revenge of the Dreamers III” by Dreamville), and even rap-influenced rhythm and blues (“Over It” by Summer Walker), there are no excuses left. Please nominate rap artists instead of rap copycats (cough cough Ariana Grande).

Is the Best New Artist curse still a thing? The winners from the last three years — Dua Lipa, Alessia Cara, and Chance the Rapper — have managed to fare much better than earlier 2010s winners like Macklemore & Ryan Lewis (broke up), fun. (broke up) and Esperanza Spalding (who?). If the recent stroke of good luck continues, there is no better option than Spanish phenom Rosalía, who constantly smashes conceptions of what she can and can’t be. From releasing one of the best rhythm and blues albums in recent memory to dominating summer charts with J. Balvin to criticizing capitalism in Catalan, Rosalía innovates at breakneck speed. She would only have had competition in this category if world-dominating Megan Thee Stallion had also been nominated. Alas, the hot girl pioneer who brought her own brand of exhilaratingly shameless rap to the national level with bangers like “Cash Shit” and “Hot Girl Summer” faced an unjust Grammy snub. Say it with me, kids: the Grammys hates rap.

Unfortunately for Rosalía and her fans, Eilish will still win out in this category for many of the reasons I’ve outlined in previous sections. As a palatable, young, hip breakout star, she’s catnip for the Grammys. Lizzo acts as the sole challenger to Eilish, but lacks a strong case considering she signed to a label, released her biggest songs and began to receive industry accolades three to four years ago. However, Lizzo may shock Eilish in this category and others and pull off her own Grammy domination. This year’s pool lends itself to a sweep — it may only be a question of who can pull it off.