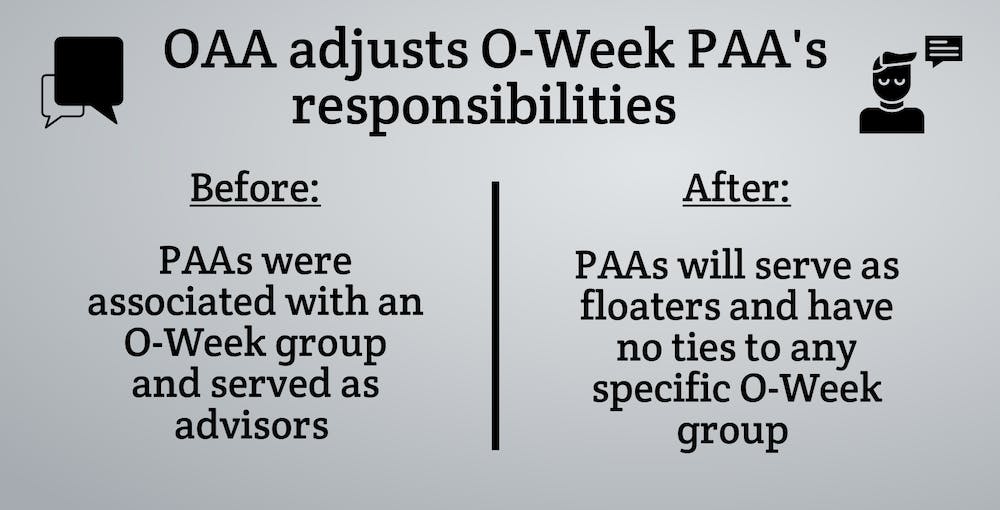 Bhimani, director of the OAA, said these changes would be reverting to an older model, as opposed to turning to an untested system.

“For more than 15 years this exact structure was in place without issue. It wasn’t until the past few O-Weeks that we experimented with a model that attached O-Week PAAs to O-Week groups,” Bhimani said.

According to Bhimani, there is a heavy workload that comes with being both an O-Week PAA and advisor. O-Week PAAs are currently responsible for both academic and social aspects of O-Week, as they must plan academic meetings and help set up incoming freshmen’s schedule while also being ready to help integrate and welcome new students into a new college environment.

“After running the experiment, we have found that the original model actually worked very well for us,” Bhimani said. “It allowed the O-Week PAAs to serve in an elevated leadership role with ample time to focus on the academic components of O-Week and assist all incoming freshmen at their residential colleges.”

According to Smeet Madhani, a senior from Will Rice College, having to juggle both roles added additional strain on the already strenuous environment of O-Week.

“[O-Week is] busy for everyone, but I think that having to have a dual role put a lot of stress on trying to make sure that as an O-Week PAA we’re completing our duties,” Madhani said.

According to Madhani, while PAAs have to juggle the workload of being an advisor, such as making crafts, learning the college dances and attending meetings, they also had to attend lengthy PAA training.

However, former Will Rice O-Week coordinator Colin Chan said that he believes that making interpersonal relationships with new students is an integral part of being a successful PAA and removing that connection could cause PAAs to become less successful in their role.

“I do think having a close personal relationship with students through an advising group is important because it gives the PAA a very easy way to link into the relational network of O-Week. As floaters, I feel that it might be hard for some PAA’s to really get to know the new students,” Chan said.

Chan also mentioned that it might be difficult to find four qualified individuals per college that fit the qualifications of the new system, at least for the upcoming year.

Edesiri Mushale, a former O-Week coordinator, said he believes this change could be beneficial, as PAAs may find it tricky to both connect with their new students and focus on their academic duties. He also said that the added stress of the intense workload can cause a divide between the PAAs themselves.

“I do know that my PAAs were always under a lot of stress and working all the time, and that even caused divides between the PAAs themselves, as some people would try to pander towards the advisor job or the PAA job more,” Mushale, a McMurtry College junior, said.

Jones College junior and O-Week PAA Hannah Kim said she is curious and hopeful to see how much more the PAAs will actually be able to do, but she also is unsure how this change will affect a PAA’s performance. According to Kim, most of a PAA’s work is during advisor training.  Kim believes that a possible negative impact of PAAs being attached to an advising group is a strained team dynamic, which she hasn’t experienced.

“On one hand, because O-Week PAAs have their separate trainings and duties during advisor training, it can be hard for us to hang out and work with our advising team,” Kim said. “I imagine this change is meant to give PAAs more time to do their tasks, dedicate more individualized attention to new students, and balance their wellbeing during training and O-Week. And if that really happens, then it sounds like only beneficial things can come out of this change.