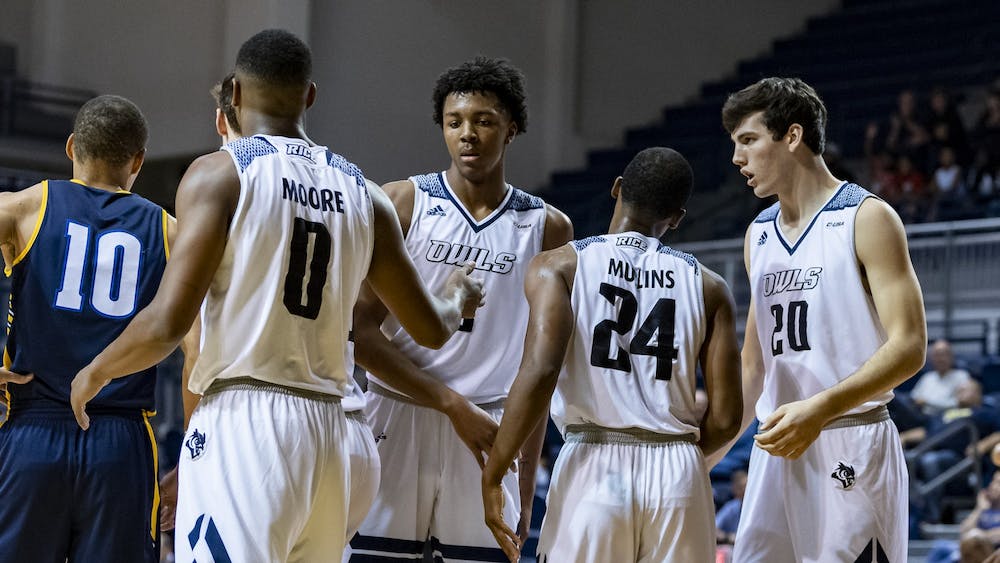 The Owls have struggled recently, winning only one of their last eight games. Their most recent loss was a 79-59 beating at the hands of the University of North Texas on Monday night, dropping Rice’s record to 9-11 on the year and 1-6 in C-USA. Head coach Scott Pera said the team’s focus waned in the closing minutes of the game.

“We couldn’t maintain our discipline offensively,” Pera said. “We had a 10-point game with five minutes left, and we had five straight possessions where we held them to no points but came up empty-handed. We couldn’t convert those [opportunities] to make it closer, and that’s why the game separated at the end.”

For the Owls, sophomore guard Trey Murphy III scored 11 points and grabbed a game-high 10 rebounds, recording his second double-double of the season. Murphy said the team competed well but has work to do to improve its play.

“We played a good game against North Texas, probably the No. 1 team in the league,” Murphy said.  “And we fought. There were some plays offensively and defensively that we didn’t make, but we’re competing. That’s the main thing that I’m happy about. The main takeaway from these last few losses is we need to play harder on defense, play smarter on offense, and focus on playing more together as a team.”

Also against North Texas, freshman forward Zach Crisler scored 11 points and grabbed six rebounds. It was his first career double-digit scoring game, and with it, Crisler became the seventh different player to lead Rice in scoring this season.

The Owls have spread their scoring around all season, with four players averaging double-digit points per game, among 10 rotation players each averaging at least 10 minutes played per game. According to Pera, the deep rotation is necessary to support the Owls’ aggressive offensive attack.

“It just comes down to style of play,” Pera said. “If we’re gonna play fast, try to push the ball and shoot as many threes as we do, we’re gonna have to play a lot of guys.”

Rice's ’ next two conference opponents, UTEP and the University of Texas, San Antonio, will present the Owls with a series of challenges.

The Owls’ matchup against UTEP features the Miners’ Bryson Williams, one of last week’s C-USA Co-Players of the Week who is averaging 19.4 points and 6.9 rebounds this season. According to Murphy, Williams is one of the top players in C-USA.

“UTEP has a player of the year candidate in Williams, he’s a 20-plus [points per game] guy. So we’re going to have to find a way to stop or contain him,” Murphy said.

After Williams and the Miners, Rice will take on UTSA and its star guards, Jhivvan Jackson and Keaton Wallace. Murphy said Jackson and Wallace are both dynamic offensive threats.

“UTSA has two guards that are both capable of scoring 30 [points] each, so we’re going to have to find ways to slow them down,” Murphy said. “It’s hard to find ways to win if we don’t play well on defense.”

Jackson and Wallace are averaging 25.7 and 17.2 points, respectively, and are leading UTSA in assists and steals. Senior guard Ako Adams said the Owls must make adjustments on both ends before facing the Roadrunners.

“We need to play smarter on offense, and be more aggressive,” Adams said. “Defensively, we have to talk more and be more aware. Ultimately, if we stay together and go out there and compete at our highest level we can win these games.”

Despite their star players, neither UTEP nor UTSA has a record above .500 in conference this season. According to Pera, Rice will nonetheless need to be in top form to pull out wins.

“Both teams have great individual players and they’re both well-coached,” Pera said. “We have to stick together to what we do well, stay connected, play with tremendous discipline and stick to the game plan to give ourselves a chance to win.”