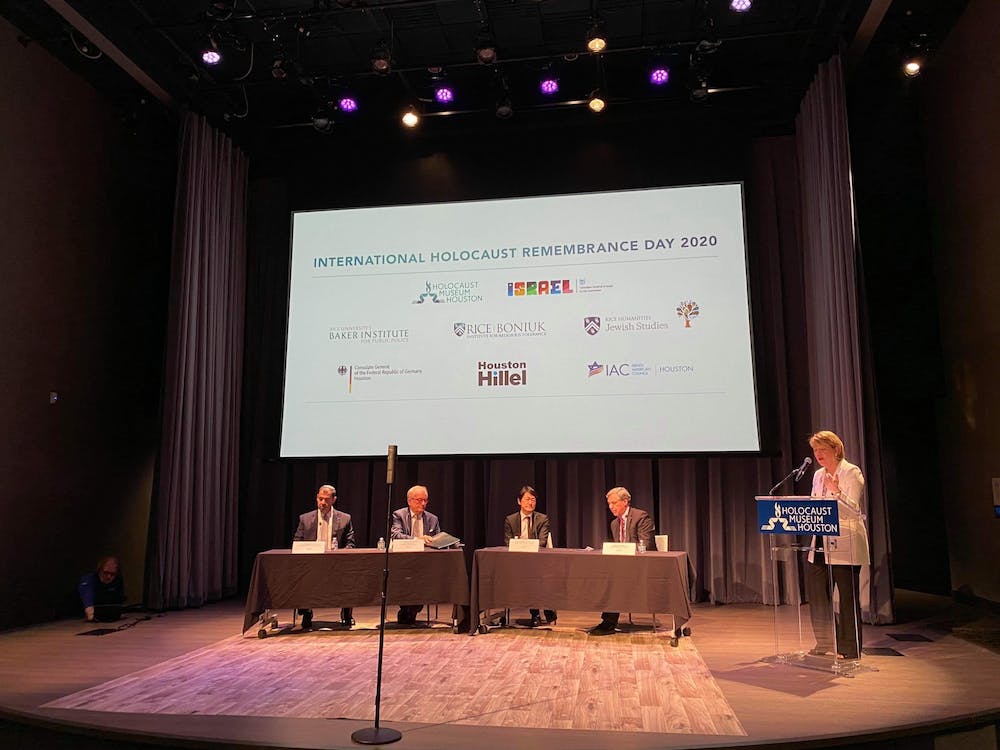 The Holocaust Museum Houston hosted a panel discussion and play commemorating the 75th anniversary of the liberation of Auschwitz-Birkenau, the largest concentration and extermination camp operated by the Nazis during World War II. Rice University’s Program in Jewish Studies, Boniuk Institute for the Study and Advancement of Religious Tolerance and Baker Institute for Public Policy were among the several sponsors for the event, which was also held in observance of International Holocaust Remembrance Day 2020 on Monday, Jan. 27.

The panelists included the consul general of Israel to the Southwest United States, the consuls general of Germany and Japan in Houston and the director of the American Jewish Committee, Houston.

Ling DeBellis, a Martel College freshman, said it was incredibly powerful to see diplomats from different countries coming together and recognizing this anniversary.

“It’s a poignant, vital piece of our history,” DeBellis said. “Just seeing the progress that we’ve made, to see diplomats coming together and talking and saying, ‘This is history, this is what happened and we can never let this happen again.’ I thought it was very inspiring.”

Matthias Henze, director of the Program in Jewish Studies said the remarks by the three consuls general — Gilad Katz of Israel, Thomas Meister of Germany and Hideo Fukushima of Japan — during the panel discussion were thoughtful and moving.

“All too often, such remarks run the risk of sounding rehearsed and trite. On Monday we saw the opposite,” said Henze. “All three consul generals showed genuine concern about the rise of anti-Semitism in North America and Europe, and all had concrete ideas about what to do to stem this new wave of hate.”

DeBellis said she appreciated how the panelists didn’t stay completely rooted in the past, and that they talked about combating the rise of anti-Semitism in the U.S., particularly on college campuses.

“We have to be vigilant about not just anti-Semitism, but any kind of hate speech, any kind of violence against any kind of other group,” DeBellis said. “My hope is that the Holocaust has taught us that we can never go back to that again.”

The second half of the event on Monday was a one-woman play about second-generation Holocaust survivors, featuring Hadar Galron, an Israeli playwright.

Lavina Kalwani, a Lovett College junior said she thought the play was incredibly powerful and moving.

“It was a really good avenue for me to be able to understand what that generation of children went through and currently go through,” Kalwani said. “And I think it was done in a way that was very eloquent and moving and very intense and powerful, but also very real.

Kalwani said she really liked the consul general of Germany’s emphasis on education about the Holocaust.

Paula Sanders, director of the Boniuk Institute said the institute and the Jewish studies program often partner to provide educational activities to the university community.

“In November, we collaborated on a program celebrating the centennial of Mieczysław Weinberg, a well-known 20th-century Russian-Polish composer who was the only member of his family to survive the Holocaust,” Sanders, a professor of history, said. “We’ve also done teach-ins on anti-Semitism.”

Henze said there are currently multiple courses offered at Rice that either touch on, or are devoted entirely to the Holocaust such as “Holocaust Representation in Literature, Art and Film.”

“We are deeply concerned about the dramatic resurgence of anti-Semitic incidents in recent years in the U.S., and we believe that one way of combating these outbreaks of hatred and violence is education,” Henze said.

Robin Wolter, who was an exchange student at Will Rice College this past fall from Jacobs University Bremen, in Germany, said that the Holocaust and Nazi Germany were topics covered in his primary and secondary schooling.

“The education system aims at covering all facets, including its history, how it evolved, how it came about, and also what we need to do to prevent such horrible ideologies being implemented in the future,” Wolter said.

DeBellis said she has Jewish ancestry that goes back three generations.

“There were only a few immigrants to the U.S. [from Lithuania] and my mother’s line descends from those few people,” DeBellis said. “But the rest of that big huge family — she just heard of them through stories and stuff — we believe that that whole side of the family that stayed,  perished in the Holocaust.”

Wolter said he believes private institutions like Rice or Jacobs University should take part in communicating this history to its students. Wolter said he found it interesting how students approached him when they got to know that he is German.

“I had many dialogues at Rice and Jacobs that dealt with the Holocaust, and the Nazi age in general, in which questions such as 'How it did evolve?' and ‘Was your own family involved?’ were frequently asked,” Wolter said.

“We have to listen to their stories. And as painful as it is — particularly for them, and as much as it is for us — we have to talk about it,” DeBellis said.