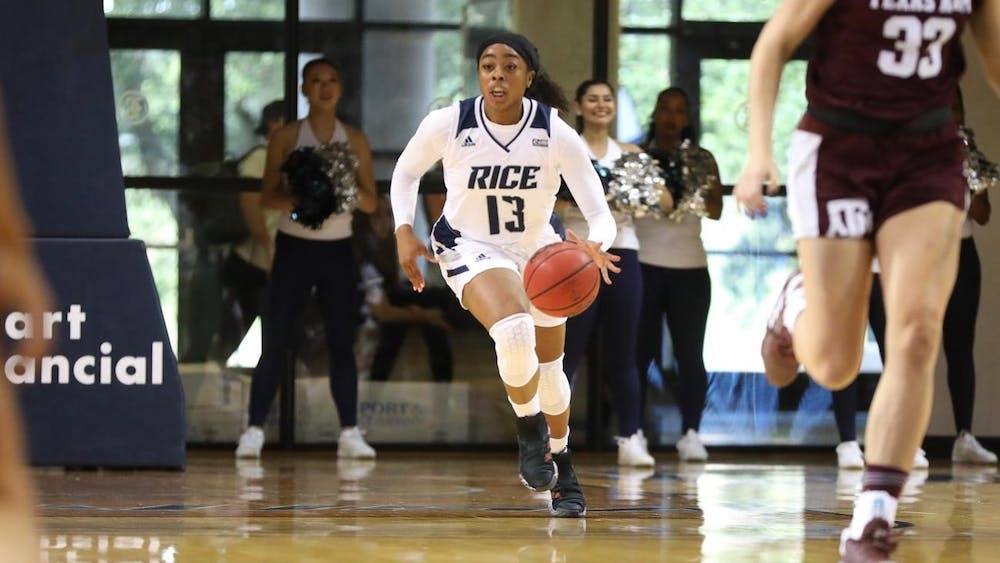 When she’s not shooting hoops on the basketball court, you can find Rice forward Erica Ogwumike shooting YouTube videos in her room. Although she graduated with her bachelor’s degree from Rice in December, finishing one semester early, Ogwumike continues to play for the Rice women’s basketball team. Having already been accepted into medical school, Ogwumike has decided to share the lessons she’s learned and capture her experiences in a memorable way — through YouTube.

Since December, Ogwumike has been documenting the pivotal moments of her life on her YouTube channel, vlogging about her medical school interviews and showing viewers a day in the life of a Division 1 athlete.

“People asked me for the longest [time] to start something just to share what I’m doing, how I got to where I’m at and [give] advice because there aren’t a lot of pre-med student-athletes out there,” Ogwumike said.

Ogwumike first joined a basketball team in fifth grade, after tagging along to her three older sisters’ basketball practices after school. Ogwumike said it wasn’t until her sophomore year of high school that she realized she wanted to follow her sisters’ footsteps again by pursuing college basketball.

“My older sisters were playing basketball in college, so I saw how you could use basketball as an awesome opportunity to get a great education and [use it] as a platform for change,” Ogwumike said.

After high school, Ogwumike headed off to Malibu, California to attend Pepperdine University, and played on the women’s basketball team with her older sister, Olivia. After one year, both sisters decided to transfer to Rice and continue playing college basketball.

But even with the support of her sister, Ogwumike said she still found herself needing to adjust to Rice.

“The amount of time studying and trying to improve your craft, which is your sport, is increased to another level as well as your academic load, so it took a while to get adjusted to,” Ogwumike said.

After two years of playing on the team, Ogwumike said she’s grateful for the opportunity to witness the team’s trajectory.

“The growth that I’ve witnessed in our program over the past [three] years surpassed any of my dreams and goals, and I am just happy to be one small part in that,” Ogwumike said. “This program is truly amazing [and head coach Tina] Langley is truly amazing.”

Being part of a college basketball team allowed her to grow in more ways than one. Throughout the years, Ogwumike said she learned time management, resilience, communication and teamwork.

“I just love the teamwork aspect of working together to achieve a collective goal,” Ogwumike said.

According to Ogwumike, the physical aspect of college athletics has also been important to her.

“You have to be in shape in every aspect of fitness — it involves running, jumping, changing directions, strength, et cetera,” Ogwumike said. “I like the versatility of [fitness].”

“Medicine is interwoven into many aspects such as academia, policy, law, media and more,” Ogwumike said. “I have so many interests that I know I can cater to all while being a physician and working towards something so altruistic each day: helping people reach their optimal level of health.”

As she describes in her video “How I Got Into Med School,” Ogwumike’s decision to pursue medicine was gradual.

“I never had this [“a-ha”] moment — it was just over time, I became more exposed to medicine, physicians [and] health care and I began to see myself in this profession,” Ogwumike said. “No one in my family is in medicine, so it has been a shot in the dark, but I gradually learned through the great resources at Rice and the Texas Medical Center that it’s what I want to pursue.”

“At some point, I decided that it would be cool to share the knowledge and info I’ve gotten along my journey,” Ogwumike said. “If my channel could help someone like me in the past, it would be worth it.”

Although Ogwumike began her channel to provide resources for high school students hoping to balance pre-med and college athlete commitments, it soon developed into a way for her to capture special moments in her life.

“This channel has made [me] aware of living in the moment,” Ogwumike said. “As I go back and watch a video, I realize that there are so many great moments in my life that I easily forget about it. This channel has been a great way for me to [cherish] those memories.”