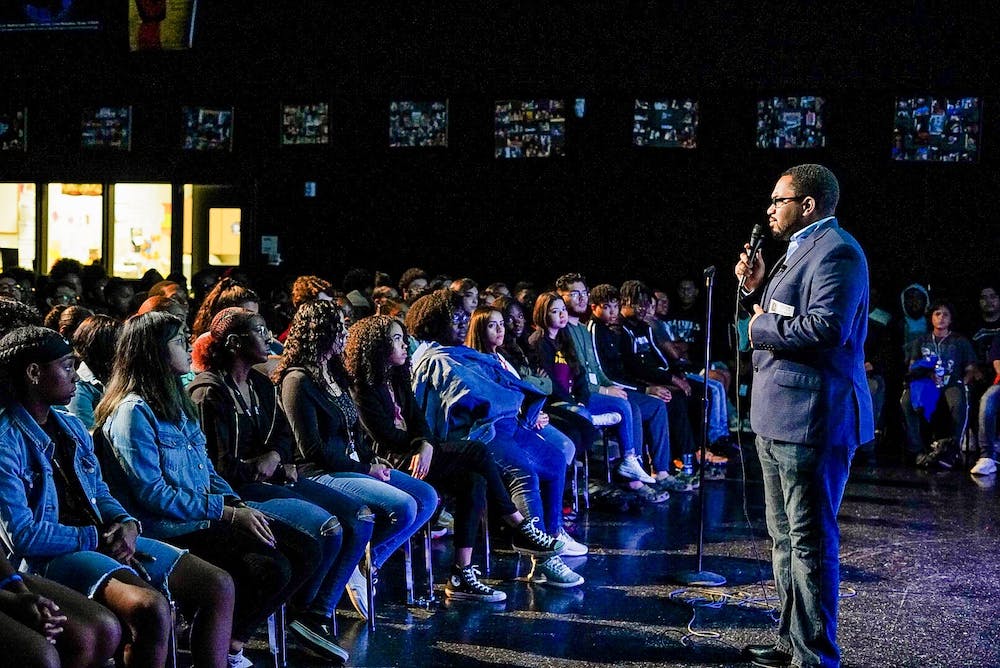 Wickliff, 29, started his tour in Beaumont and ended with a community event in Round Rock after one month of travel. The idea for the tour came to him after years of personally mentoring high school students, during which he noticed that many students avoided turning in college, graduate school and job applications because they were afraid of their prospects.

“Everybody seems to have the narrative that things are getting worse in the country and in the world,” Wickliff said. “You’re being told by every adult in your life that you’re basically screwed, and that’s really scary.”

Wickliff took it upon himself to motivate students out of this mindset. Part of his tour was about planning for the future, which Wickliff finds especially important now more than ever.

“I don’t care what college you go to, I don’t care what you decide to major in. I don’t care if you even decide to go to college or go to some other form of postsecondary education,” Wickliff said. “The world is so competitive today. You need to proactively plan what that next step of your journey is gonna look like.”

At first, the opportunity to speak to students seemed out of reach. Wickliff spent years unsuccessfully calling organizations to create a tour of high schools. Tired of the lack of progress, Wickliff decided to organize his own tour around Texas, determined to help students find their path.

For three months, Wickliff sent emails and made phone calls until every day of his tour was booked with as many schools as he could handle. Using money and vacation time he’d been saving up, Wickliff stepped into a rental Dodge van on Oct. 18, 2019 and hit the road.

While on tour, Wickliff’s day started at 5 a.m. with a morning workout, followed by a visit to his first school by 9 a.m. He traveled from school to school in the rental, which was cramped with boxes, luggage and a team consisting of a driver, a videographer, and his now-fiancee. He usually visited three schools in one day — once, he visited five.

Although it was exhausting work, Wickliff said he felt it was time and effort well spent, especially after seeing the impact he had on the students he spoke to. Seeing students seem more positive and excited for their future than they did before his presentation was more than enough, he said.

In addition to helping students, Wickliff said his tour gave him a better appreciation of Texas and gave him confidence that he could help people at a larger scale.

Wickliff and his team also found ways to make road life more fun. The van became accustomed to an eclectic mix of hip-hop, country music and rhythm and blues across generations. Wickliff’s own personal favorites were Translee, Eminem, Royce da 5’9”, KYLE and Kevin Gates, most of whom he would listen to when working out or before going on stage. Most of the time, however, Wickliff would spend his breaks sleeping, writing or playing on his PS4 — he is 29, after all.

Although planning a tour is no small feat, Wickliff said he has always been goal oriented. In elementary school, he made it his goal to have a doctorate before he turned 26, just like Martin Luther King Jr.

“I had done a report on Dr. King and found out that he got his Ph.D. when he was 26 years old,” Wickliff said. “That seemed like a really great accomplishment. I thought he was a really great Black male figure in history and I was always taught if you want to be the best you have to compete with the best. So ... in elementary school, I put it in my mind that I was going to get a Ph.D. before I turned 26.”

Wickliff said that with the help of his mother’s planning, he went on to graduate high school early,  entering the Texas Academy of Math and Science at the University of North Texas when he was 15. After spending two years at UNT, Wickliff transferred to Rice, graduated in 2010 at only 19 years old and went to Harvard Law School.

“I’m always trying to find ways to make myself stand out. And so I knew engineers who had business degrees, but I didn’t know any engineers who had a law degree,” Wickliff said.“[Law] was actually a way of making me a better overall engineer.”

After Harvard, Wickliff got his engineering doctorate at Texas A&M University. He applied for a lecturer position at Rice, but was instead chosen for the position of associate vice provost.

Wickliff’s journey will not end here; at only 29, he still has the rest of his life in front of him. A self-proclaimed tech-nerd, he dreams of being in the C-Suite of a well-known technology company and wants to continue to give back to his community.

Despite the ambition he has displayed ever since he was in elementary school, Wickliff said he rarely knows what his own future holds.

“Anybody who says they’ve had their whole life planned out, they’re exaggerating or they’re just flat out lying,” Wickliff said. “Don’t let other people make you feel uncomfortable [about being lost]. Try things, and then make sure you’re on a pathway where you are continually progressing.”