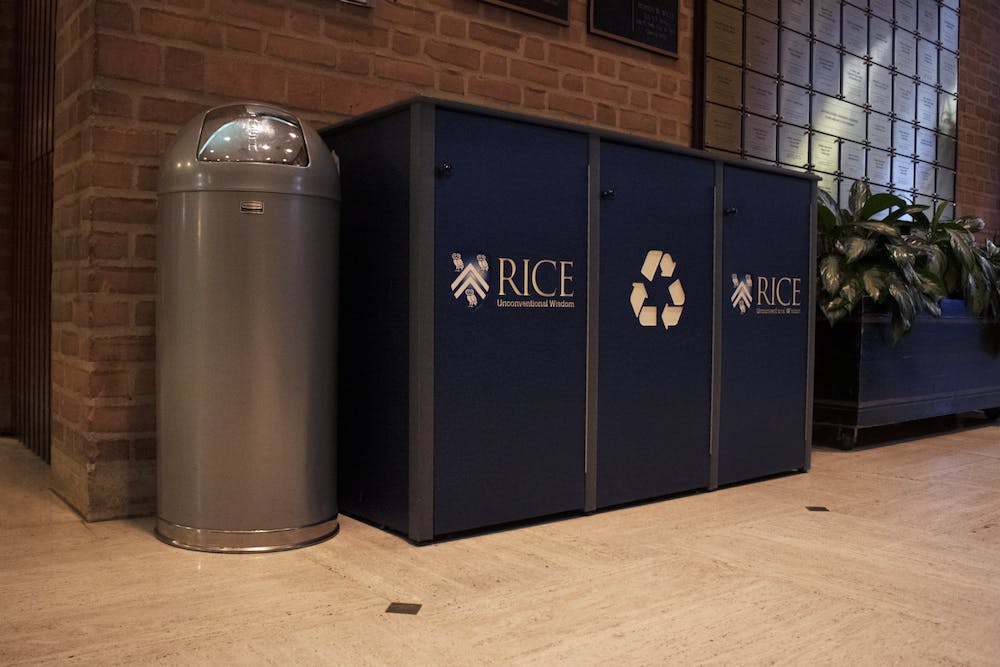 The percent of waste recycled at Rice has remained stagnant around 25 percent in recent years, but the Administrative Center for Sustainability and Energy Management is aiming to reach 40 percent by 2020, according to the Facilities Engineering and Planning website. However, this goal is hindered by Waste Management’s requirement to throw away recycling on campus if it is contaminated with trash.

Currently, Rice utilizes a single-stream recycling model to facilitate the recycling process for students, staff and faculty. This model allows users to place papers, metals and plastics (types 1-5 and 7) into one recycling bin instead of individually sorting these materials into different bins according to the FE&P website.

According to Sabrina Bisaga, an EcoRep at Baker College, one of the biggest problems concerning recycling is the lack of awareness around what can be recycled.

“A lot of people just don’t take the time to understand what is recyclable and what’s not,”  Bisaga, a junior, said. “For example, people think pizza boxes are recyclable, but in reality, they can contaminate the whole bin.”

While plastic bags, plastic wrap and styrofoam are also commonly recycled, they contaminate the whole bin, according to Richard Johnson, director of the Administrative Center for Sustainability and Energy Management at Rice. Johnson said that these misplaced items can stall the recycling process.

“Professionals who work in the recycling industry lament that people practice what’s called ‘aspirational recycling,’” Johnson said. “Sometimes people put something in a recycling container hoping it can be recycled when, in fact, it cannot. A good mantra to adopt is ‘when in doubt, throw it out’.”

Recycling standards that change over time can cause further problems, according to Allison Yelvington, a co-head EcoRep from Baker.

“I can see how people get confused when the standards of recyclable items and non-recyclable items change over time, which is why we try to educate people as much as possible,” Yelvington, a junior, said.

Johnson said that after the recycling arrives at Waste Management to be processed, a sample is taken to determine contamination.

“Just a few years ago, a contamination level of 15 percent was considered acceptable. Nowadays, even five percent is too much,” Johnson said. “If a load is found to be too contaminated, it must be scooped back up into a truck and hauled to a landfill at the customer’s expense.”

According to Johnson, recycling processors value clean recyclables because they can sell it to buyers in global markets. Johnson said it’s important to remember that recycling is a business. Recycling facilities are becoming more stringent in accepting contaminated bins due to changes in demand for recyclables, mainly China’s ban on U.S. recyclables.

“The percentage of contamination impacts how marketable the recyclables are for the processor, like Waste Management. A clean load of recyclable materials is worth more to them than a load with a lot of contaminants,” Johnson said.

FE&P has made efforts to reduce contamination. The department has teamed up with Housing and Dining to develop clearer signage for recycling and centralized spots in buildings for collection. FE&P is also testing new trash and recycling bins that use sensors to notify the grounds personnel when the collection is necessary.

Students themselves are taking the initiative to start a compost program for food waste with guidance from Johnson. Ashley Fitzpatrick, a sophomore at Martel College, is the head of the Student Association Composting Task Force. According to Fitzpatrick, the task force is attempting to compost pre-consumer waste in the kitchen starting next semester and eventually expand to post-consumer waste in the serveries and retail dining.

“The hardest part will be getting students to change their behavior and sort their waste properly,” Fitzpatrick said.

“We should’ve been doing this for a long time,” Fitzpatrick said. “It needs to be normalized, and people need to understand the food waste better.”

According to Fitzpatrick, food composting can reduce the amount of waste and recyclables that end up in landfills, which would help Rice achieve its goal to be carbon neutral by 2038.

“Rice has the prestige and money to be sustainable, so the question is why we haven’t been doing this yet,” Fitzpatrick said.