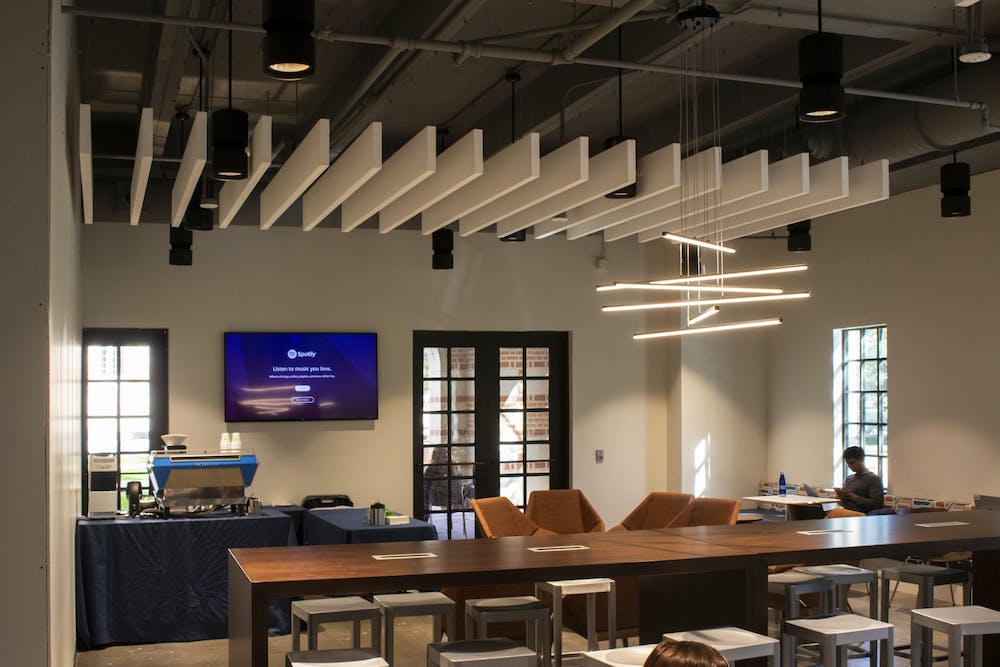 A new coffee shop is set to open next January at the west end of the Woodson Courtyard at McNair Hall, according to Peter Rodriguez, dean of the Jones Graduate School of Business. According to Rodriguez, the initial launch date in September was delayed by issues with obtaining permits.

“We had a couple of permitting setbacks that put us in the back of the queue at the city of Houston,” Rodriguez said. “There wasn’t anything very serious, but because it’s a location that’s going to serve some foodstuffs, we needed additional [permits].”

Audrey’s, the new coffee shop, will be the latest installment by entrepreneur David Buehrer, who has also founded Greenway Coffee, Blacksmith and Susu Kopi, his newest location that recently opened in Rice Village’s Politan Row.

“There’s going to be a by-the-cup slow coffee area where, if you had more time, you could have a fuller coffee experience,” Buehrer said. “Then there’s going to be a volume area if you need to get back to your class. There’s also gonna be some elements of savory and sweet food.”

While Audrey’s is still being built, there is a pop-up shop serving free espresso-based drinks to visitors in the McNair space in the west end of the Woodson Courtyard until Dec. 20, according to Timothy Mok, a barista at the stand.

Mok said the stand can serve espresso-based drinks, such as lattes, flat whites and cappuccinos. The pop-up shop attracts around 70-80 visitors per day, according to Mok, who said, so far, the clientele consists mostly of grad students, professors and administrators.

Emily Wang, Will Rice College junior, said she stumbled upon the pop-up shop through a Facebook post by her residential college.

“I was like ‘Oh, it’s free coffee’ and that’s what got me to come here,” Wang said. “But I’ve been coming here more often because it’s close to the Baker Institute [of Public Policy] where I have a lot of my classes.”

Rodrigo Duluc, an accounting  student at the Jones School, said that having the kiosk is convenient.

“My classes are upstairs in the Jones School,” Duluc said. “It’s a nice place to gather with friends and classmates to get work done.”

Audrey’s is not the first time Buehrer’s been involved with Rice; he said 11 years ago he was in a bid to open a coffeeshop in Brochstein Pavilion, where Flo Paris currently operates.

“I think my name kept getting brought up over the course of 11 years in conversations,” Buehrer said. “Rice University [Jones] School of Business brought me in about a year and three months ago as a consultant to talk about the coffee shop that was getting built.”

Audrey’s is currently working with Housing and Dining to incorporate Tetra into the coffee shop’s payment systems, according to George Andrews, associate dean of degree programs at the Jones School. The process of implementing Tetra as a payment option could take several months, according to David McDonald, the senior business director for Housing and Dining.

According to Buehrer, Audrey’s is designed to be transparent and educational; students will be able to see everything operating behind the coffee bar and baristas will be trained to discuss aspects of running a coffee business.

“Over the course of the last 12 years, I’ve probably helped out 15 students with their thesis or helped them with some kind of project,” Buehrer said. “So when I started designing the cafe, I had education as a foundational element.”

Rodriguez said he had initially reached out to student-run business Coffeehouse to take over the space, but management at the time declined due to logistical challenges. Coffeehouse management declined to comment for this story.

Bueher said Audrey’s will be his 10th location, the culmination of over a year designing and constructing the space.

“I play one song and one album every time I open one of the shops. [When I opened Blacksmith], I played ‘The Unforgettable Fire,’ which is a U2 song, and I played an album from the Future Islands just to get the vibe right inside the space.”

Although most of Audrey’s customers will most likely be from Rice or the campus’s surrounding areas, two visitors to Audrey’s next spring will be from Ethiopia, Buehrer said — the father and son owners of a small Ethiopian coffee vendor.

“When Rice opens they’re gonna be there visiting, because they’re so in tune with our operation,” Buehrer said. “They’re sharing their hard work and labor with new customers. We work together very closely and all of our coffee is built on relationships.”

In light of ongoing COVID-19 concerns, an on campus commencement is postponed until further notice, according to an email sent by President David Leebron, Dean of Undergraduates Bridget Gorman and Interim Provost Seiichi Matsuda. There will be an online ceremony on May 16, according to Gorman, where graduates names will be read out loud.

Rice accepts 10 percent of applicants for the Class of 2024

Rice University accepted 10 percent of applicants to the undergraduate class of 2024, a slight increase in acceptance rate from last year’s record-low 8.7 percent acceptance rate. Due to Rice’s cancellation of all on-campus admission events in response to the COVID-19 pandemic, accepted students will be invited to virtual events in lieu of visiting campus during the traditional Owl Days and Admit Days.