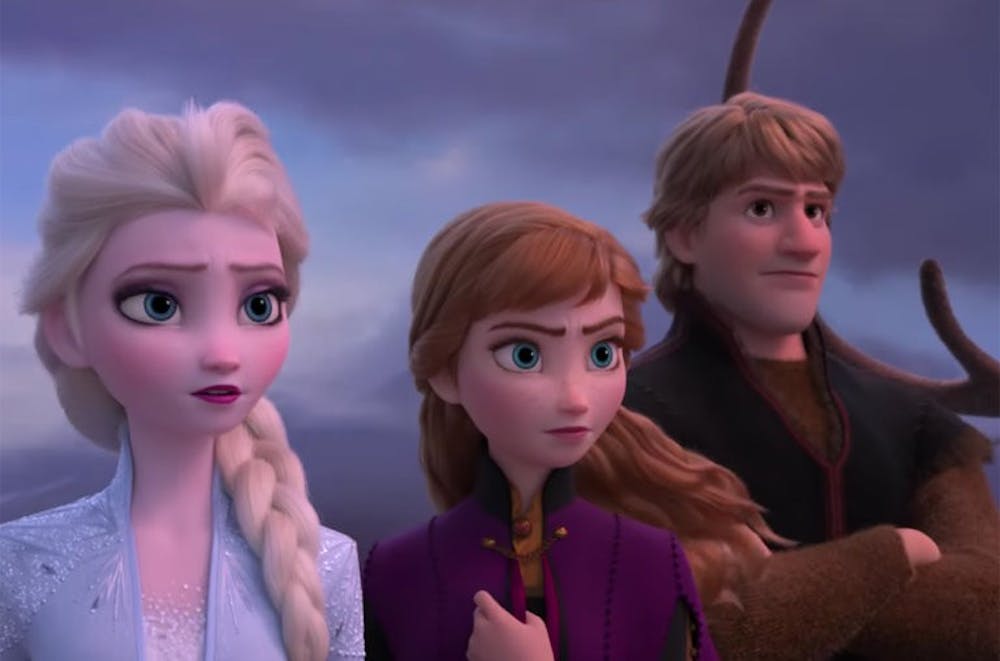 After “Frozen” took the world by storm in 2013, a sequel has been in discussion on social media among executives, columnists and fans alike. As the second highest grossing animated film of all time (recently dethroned by Disney’s CGI live-action remake of “The Lion King”) it was expected that Disney would attempt to capitalize on “Frozen”’s monumental success.

While “Frozen 2” fails to provide the musical earworm that was “Let it Go,” it elevates itself above its predecessor with a tonal shift that allows for more character growth while still retaining the franchise’s focus on familial love.

After expanding on Anna and Elsa’s childhood relationship with their parents, a central issue from the beginning of the film is the snowman Olaf’s (Josh Gad) fear of change as he ages. Although many of his concerns are treated in a humorous light fitting for a Disney film, he shares the same fears that accompany many of the original film’s viewers who are now in their teenage years. Anna (Kristen Bell) responds with “Some Things Never Change,” an upbeat tune that reorients viewers to the movie’s beloved characters and establishes where they stand in the years that have passed. While the passage of time does affect us as Olaf fears, Anna reassures him that  love endures and  that she will always be there for him in addition to her sister Elsa (Idina Menzel), boyfriend Kristoff (Jonathan Groff) and his trusty reindeer companion Sven, a makeshift family that has formed since the end of the first film. Within this cheery number, we learn that Kristoff is planning to propose to Anna, and Elsa has been hearing a mysterious voice calling to her.

“Frozen 2” lacks the same cheeriness that “Frozen” possessed, largely due to the changes that we see in Anna. While unfettered optimism defined her character in the original, she has grown since then, and her central conflict results from this change. Her optimism has always been defined by her love for her family, namely her desire to protect Elsa from her own internal struggle. Anna still possesses the same protectiveness of her sister, but it now comes with a more acute awareness of reality. This film breaks Anna down, isolates her and allows us to see her angry at Elsa for turning her away years after they have repaired their sisterly relationship. Seeing Anna at her worst makes her triumphant character arcall the more satisfying, with her song “The Next Right Thing” marking the most emotional moment of the film. Even with the resolution that was provided in “Frozen,” the sequel’s strength lies in acknowledging the idealism of its previous happily ever after.

Although the audience was previously granted a fairytale romance with Anna and Kristoff, Kristoff now deals with conflict that demonstrates a more realistic portrayal of relationships within the film. He faces his own insecurities surrounding his fear that he and Anna have grown apart in “Lost in the Woods,” an emotional ballad complemented by an animation sequence reminiscent of 1980s slow pop music videos that don’t take themselves too seriously. Even in this fantasy world, the film manages to provide and maintain an added realism with the characters’ emotional self-explorations.

Furthermore, “Frozen 2” itself is self aware. A sequel is never going to live up to the originality of its predecessor. Elsa herself rolls her eyes and brushes away an ice memory of herself singing “Let it Go,” mimicking audience members who rolled their eyes and changed the radio station six years ago.

The movie’s greatest strength and weakness simultaneously lie within the central plot. Elsa and Anna must find the truth of what happened between their kingdom Arendelle and Northuldra, a nation that resides in an enchanted forest, and, in the process, the truth of their own pasts. Early on in the film, we learn that Arendelle gifted their neighbors with a dam, but eventually we learn Arendelle is also guilty of deception, broken treaties and provoking wars against their unarmed Northuldran counterparts. This conflict has led some critics to identify imperialism and colonialism as driving themes of the film. Anna is determined to set things right by flooding Arendelle with the destruction of the same dam that was “gifted” to the Northuldrans, asserting that if they do not set things right, Arendelle is not worthy of being saved. However, in typical Disney fashion, both Anna and Elsa’s sacrifices are nullified through magic and miracles, and the consequences of Arendelle’s actions are never quite realized.

All in all, “Frozen 2” is a solid sequel and shines primarily in its differences to the original. While certain turns of the plot become predictable and ideas such as the reparations Arendelle owesNorthulda are never fully realized, it delights in typical Disney fashion.