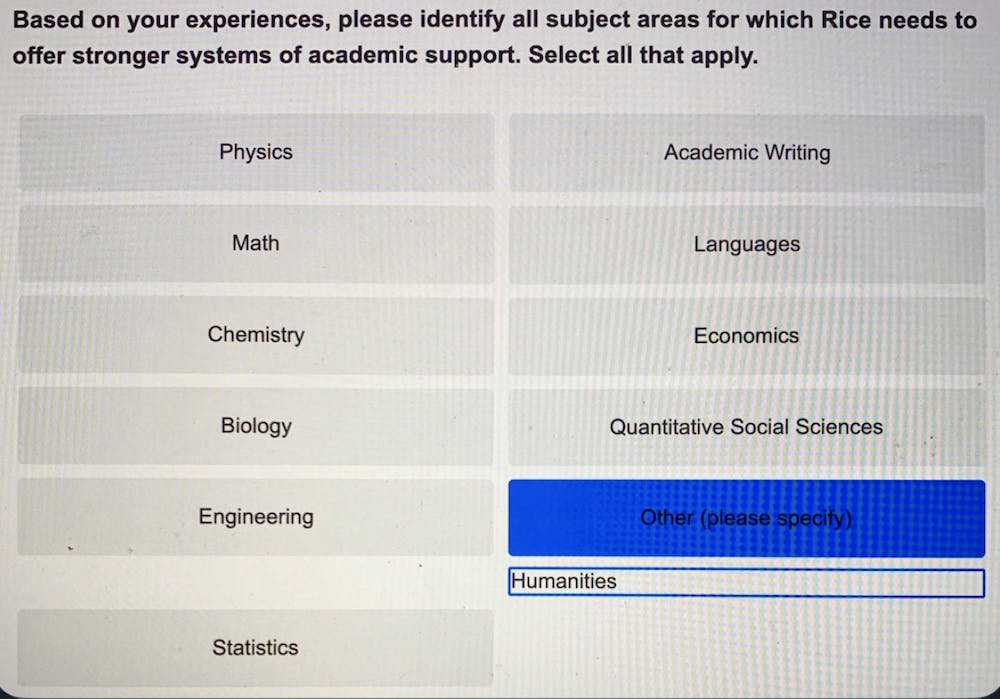 The Survey of All Students, sent out by the Office of Institutional Effectiveness at the beginning of November, included a question about subject areas in which Rice should offer more academic support without providing the humanities as a response option.

Aster O’Leary posted a picture on Twitter of the question along with the caption: “When the Survey of All Students forgets that the humanities are also a real subject area.”

O’Leary also took issue with the specification of “quantitative” social sciences as an option for that same question.

“I believe that the humanities are generally underappreciated in higher education,” O’Leary, a Jones College senior, said. “The exclusion of [the humanities] from the [Survey of All Students], whether intentional or not, highlights this fact.”

According to Grace Wickerson, the president of the Student Association, one of their roles as president is to create a set of questions on the survey. The questions are crafted to align with the SA’s external objectives for the year.

“I started these discussions back in May about academic support resources at Rice,” Wickerson, a Brown College senior, said. “So then the questions were kind of the decision we made over the summer to get more data on these [resources].”

They said that there was no intent behind the lack of a humanities-focused option.

“It was kind of just me being a STEM major and also just trying to decide what the best way of connecting the peer institution data to this question [was],” Wickerson said.

Many of Rice’s peer institutions break down humanities support into academic writing and languages, two options that were included in the SAS question, according to Wickerson.

Kayla Cherry, a senior from Lovett College, said that she enrolled into the School of Humanities knowing that Rice is a STEM-heavy school. She said she was disappointed but not surprised by the survey question phrasing.

“As I’ve taken both economics and English classes over the years, I realize that there’s just no dialogue across disciplines at all,” Cherry said. “STEM is always leaving the humanities out, and the humanities is always trashing STEM for being ‘cold and spineless.’”

Wickerson said that, based on national data studies, STEM students usually have limited access to professors.

Christian Carr (Duncan ’19) saw and replied to O’Leary’s tweet. Looking back at his time at Rice, he found fault with the lack of resources dedicated to career options for humanities students.

“I think everyone knows that the job fairs are sponsored almost exclusively by the oil and gas industry,” Carr said. “It seems like the only options besides oil and gas are consulting firms, where you will end up consulting for said oil and gas companies.”

Carr said that Rice would benefit from more communication between the students and the administration.

“Of course, one of the easiest and most obvious ways [to communicate with the administration] would be to gather feedback through the Survey of All Students,” Carr said.

In response to O’Leary’s recent op-ed in the Thresher, Wickerson said O’Leary’s points were valid.

“It is a bigger issue at Rice that we think we have to go here and get the most elite job, so I definitely empathize with her,” Wickerson said.