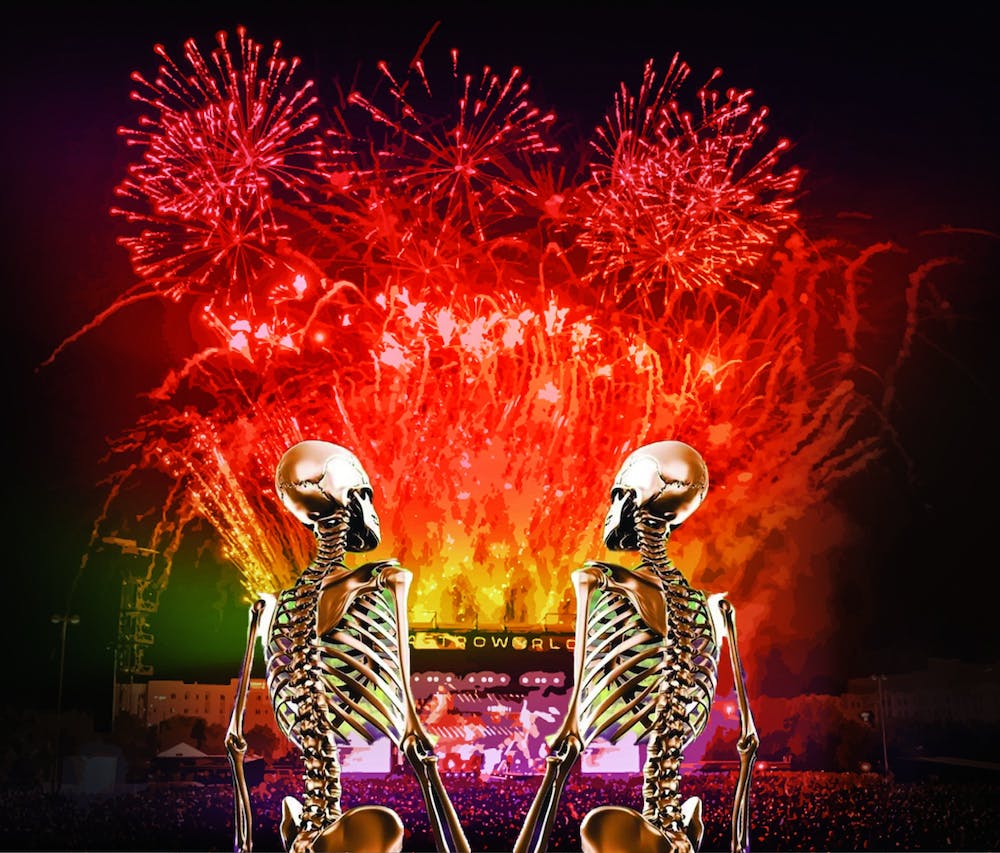 “The man who left this city with nothing and conquered the world,” said surprise guest Dave Chapelle as he introduced Travis Scott at the second annual ASTROWORLD Music Festival in Houston’s NRG Park last Saturday. Astroworld was a glimmering daylong celebration of the special connection that Houston shares with hip-hop, of which Scott is now a legendary embodiment. Last year’s inaugural festival followed the release of the rapper’s 2018 album “ASTROWORLD,” named after Houston’s defunct theme park Six Flags AstroWorld, cementing his deep relationship with Space City’s hip-hop legacy. Buoyed by Scott’s nostalgia and love for the park, Houston Mayor Sylvestor Turner has expressed interest in building a new amusement park similar to AstroWorld. Until then, Scott’s festival proves to be a lavish, electrifying substitute.

Festival-goers were greeted by a giant inflatable head of Travis Scott at the entrance of ASTROWORLD, a stark, silver colored skeletal rendition of the golden sculpture that fans associate with his 2018 album cover. The festival’s atmosphere echoed this evolution. Smoke machines sprayed grey mist into the air, with the vibrant neons of carnival rides such as the ferris wheel and kamikaze puncturing the sky. Inside, fans found yet another purple inflatable head to pose in front of and a giant Astrodome featuring space projections, prompting an undeniable sense of being transported to an alien world. The festival grounds pulsed with energy and rhythm, not just from the performers, but also from the 50,000 festival-goers who weaved their way between the “Chills” and “Thrills” performance stages and thrived in the sprawling celebration of hip-hop stretching from noon until midnight.

A relative newcomer to rap’s ever-expanding scene, Charlotte-based rapper DaBaby had the best engagement with his audience out of all of Saturday’s performers. Starting off with his hit song “Suge,” DaBaby quickly fired up the crowd. As he performed “Baby on Baby,” two large inflatable dancing babies made their way to the stage. In the spur of the moment, the rapper began removing his jewellery in preparation for crowd surfing. As his security team tried to pull him back, he climbed the barricade and jumped into the crowd, all while continuing to rap. After safely making it back on stage, DaBaby encouraged several audience members to jump the barricades and join him on stage. He rewarded those who made it onstage with water bottles and instructed them to spray fans with the water. The water surely cooled down fans who were beginning to sweat in the daytime performance.

Aside from Travis Scott’s performance, Playboi Carti drew the most energetic crowd. The rapper’s notoriously wild fanbase formed several mosh pits as the baby-voice rapper performed such hits as “Magnolia,” “Shoota” and “Kid Cudi.” Though at points we were scared for my life while being pushed around relentlessly by the crowd, the energy was on a different level. As Travis Scott proclaims in the lyrics to his song “Stargazing,” “It ain’t a mosh pit if ain’t no injuries.'' Playboi Carti’s crowd had no trouble meeting Scott’s criterion as we saw several fans get injured in the frenzy. Following the set as the crowd parted to make way for an injured man being transported to the medical tent, we heard him say that it was worth it.

After the Festival lineup was announced, fans expressed disappointment that rumors of performances by Drake or Kanye West did not come to pass. However, it soon became clear that Travis Scott was saving the best surprise for last. In the middle of his setlist, Scott earnestly introduced the next performer as the man who took a chance on him early in his career. Excitement rose to a pitch as fans guessed the identity of his secret guest, and sure enough, Kanye West walked on stage with a beaming smile and a rendition of his song “Follow God” from his latest album titled “Jesus is King.” Next, Scott and West performed the latter’s instantly recognizable “Can’t Tell Me Nothing,” after which the two artists embraced before West left Scott to an even more feverishly energized crowd.

Capping off the day was Travis Scott, the founder and headliner of the festival. All 50,000 plus attendees funneled to the Chills stage to catch the performance. After a thirty minute delay and a brief introduction from comedian Dave Chapelle, Scott made his way to the stage in front of a roaring crowd. He began his set with songs off of his most recent album and festival namesake “Astroworld”. As he towered above the crowd in a construction crane-like stage structure, he took fans down memory lane as he performed “Upper Echelon” from his debut mixtape “Owl Pharaoh,” followed by “Mamacita.” He took fans on a journey as he performed “Antidote” from his debut album “Rodeo,” followed by “Way Back” and “Biebs in the Trap” from his second album “Birds in the Trap Sing Mcknight.” Additional surprise guests such as Gunna, Swae Lee, Kodak Black and Roddy Rich also made their way to the stage to perform with Scott. After loud chants from fans, Scott finally performed “Sicko Mode”, arguably his most popular song, with a magnificent fireworks display, marking both the end of his performance and the day long festival.

One of the worst aspects of the festival was the immense crowd that resulted in long waits. Lines were inescapable: at the box office, entrance, food stands, water stations, merch booths and even at the exit! Entering the festival took around an hour itself as we had to wade through a sea of slowly moving people being funneled through few security gates. Rather than waiting in line, some eager fans tore down a barricade, allowing hundreds to storm into the festival all at once., The stampede resulted in three festival-goers being transported to Memorial Hermann Hospital for minor leg injuries, according to the Houston Police Department.

Immediately after entering the festival we were faced with another line, this one for merch. Those near the front of the queue said that they had been in line for more than two and a half hours! Walking past the merch booths, there was a large food court with a variety of local food trucks and stands. The food looked incredibly appetizing but the lines sure did not. At lunch time it took people almost an hour just to get food from a vendor. Given it was a warm day, water was also in high demand as displayed by the long and slow moving lines at the hydration stations. Worst of all however, was the line to leave. People entered the festival at various times throughout the day, but as soon as Travis Scott’s set ended, everyone stampeded towards the limited exits. As attendees broke down fences and barricades, over fifty thousand people stormed their way out of the festival.

When the lineup of performers was released the day before Astroworld, most fans were confused by two performers, Marilyn Manson and Rosalía. Though her set was lively and colorful, the Spanish artist attracted one of the smallest crowds of the day. This might’ve been because attendees simply were not familiar with the international artist or they just wanted good spots for Travis Scott’s performance which immediately followed Rosalia’s. Festival-goers watching Rosalia perform seized the opportunity to rest for the first time in hours as they sat down on the concrete floor in anticipation of the night’s grand finale.

Marilyn Manson’s performance saw a similarly low turnout, as hip-hop fans unfamiliar with the rock band used the opportunity to grab food or rest their feet. This had no effect on the band’s performance as its namesake lead singer Marilyn Manson delivered on his notoriously theatrical stage presence, draping himself on stage props and basking in the eerie red lighting. The band’s menacing cover of the famous Eurythmics song “Sweet Dreams” even saw the formation of an impromptu mosh pit. 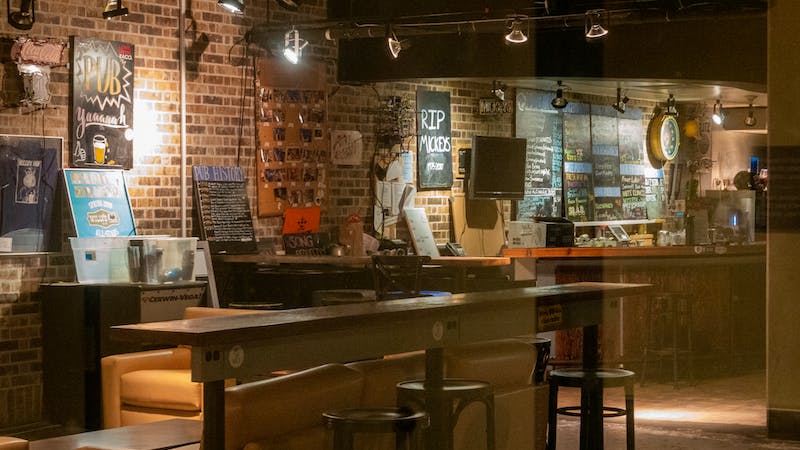 Willy’s Pub has scheduled its reopening for Nov. 1, according to General Manager Elizabeth Groenewold. Pub’s doors have been closed since early March 2020 following an alleged hazing incident and the later imposition of Rice’s COVID-19 rules. Pub’s capacity will be 100 students on Monday, Tuesday, Wednesday and Friday and will increase to 150 students on Thursday for Pub Night, according to Groenewold, a Will Rice College senior. Masks will be required unless actively eating or drinking. Pub’s pre-COVID capacity was 299.