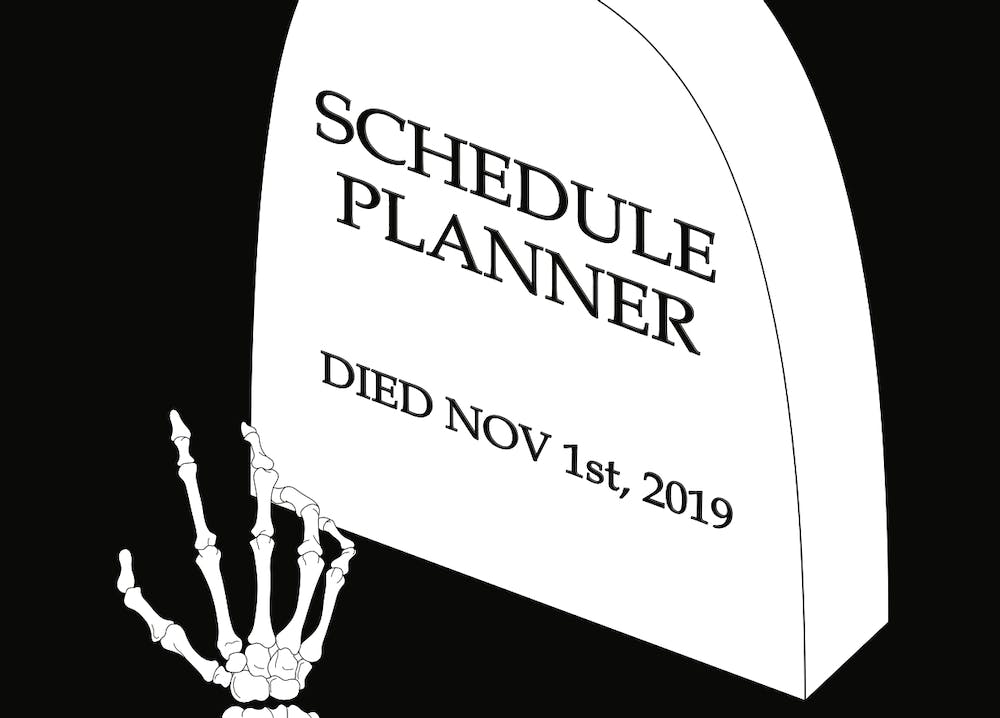 Whether filtering courses for major requirements or aimlessly scrolling through a list of interesting classes, users of Schedule Planner might miss the now-defunct website after it was shut down Nov. 1 due to noncompliance with the Americans with Disabilities Act and replaced with Ellucian’s Banner system.

With add/drop happening this Wednesday morning, the Spring 2020 registration session marked the first time, aside from Orientation Week registrations, that students were unable to use Schedule Planner.

According to Diane Butler, Office of Informational Technology director, the university decided to phase out Schedule Planner because the technology stack upon which it was developed was declared end of life by Microsoft in 2019, in addition to ADA noncompliance.

“To comply with federal law and to protect student data, the university had to decommission what would have soon become a vulnerable system; it will not be coming back,” Butler wrote in an email.

Butler declined to comment on which specific features of Schedule Planner were in violation of ADA policy.

“Not being ADA compliant is all that is needed,” Butler said. “Specifics aren’t as important as it isn’t compliant.”

Registrar David Tenney (Sid Richardson College ’87) cited the increase in the registration success rate after Banner was implemented as an indication of its benefits.

“After processing the courses selected during the two-week Course Request Period, the numbers show a significantly higher number of successful course registrations [this cycle],” Tenney said. “Because students are making their course selections within ESTHER, the new interface checks for required prerequisites and registration restrictions.”

Franklin Briones, a Brown College junior and peer academic advisor, said he began circulating a Google Form survey on student sentiment toward Banner. He said he found some repeated keywords and comments among the survey’s 88 respondents.

“Some of the criticisms of the new system are ‘it’s slow,’ ‘it’s unintuitive’ and ‘you have to click in too many windows to get to where you need’,” Briones said. “If [the administration is] choosing to use the new registration system without taking into account student concern, [the students expressed] worry this may be a trend for our future in terms of school administration.”

Robbie Foley, a Brown College senior who wrote an op-ed last week on the topic, echoed this student concern and the downside of being unable to add classes to a roster.

“In terms of administration, at best, I think it shows that they don’t really understand the way that students sign up for classes,” Foley said. “Students spend a significant amount of time just messing with their schedules. I’ve talked to a friend who said, you know he might be exaggerating, but said ‘I would not still be at Rice it if weren’t for Schedule Planner.”

Nick Lester, a Baker College junior, said he disliked Banner’s inability to save classes without registering for them and the scrolling needed in the three-paneled interface.

“The big advantage of Schedule Planner was how you could select courses and then easily click the show/not show button, which would make it so that you could easily try out different courses in different configurations,” Lester said.

Alison Drileck, a Sid Richardson junior and PAA, said the complaints about Banner are overstated.

“Yeah, we miss Schedule Planner. Yeah, we wished Banner had features that Schedule Planner did have,” Drileck said. “However, Banner is really not as bad as people make it out to be. It just students don’t like change.”

Following Schedule Planner’s shutdown, students took to various methods to express their dissent, including a Facebook event entitled “Wear Black to the Academic Quad to Mourn Schedule Planner” which surfaced online shortly after the shutdown.

The event, complete with eulogies and a styrofoam tombstone, was attended by around twenty people, including Schedule Planner creator and Rice professor Scott Cutler, according to organizer Lauren Biegel.

“It was like ‘Oh, what if we just had a funeral’ and then it kind of spiraled into deciding to have a public event in the academic quad,” Biegel,  a Wiess College junior, said. “This guy just walks up ... and was like, ‘I’m Cutler’ ... that was special. The fact that the guy who invented Schedule Planner came made us all very happy.”

OAA Director Aliya Bhimani spoke on the focus group of around 60 Peer Academic Advisors who gave feedback on Banner last semester before its first public release for O-Week Fall 2019.

Some of Banner’s current features were implemented in response to PAA request during this focus group. For example, the three-paneled layout, according to Bhimani, came after students asked if everything could be on one screen.

“We’ve launched [Banner] for all the continuing students, we’re in the midst of that right now. So will feedback come? Yes,” Bhimani said. “It hasn’t come in big strides right now, we’re right in the middle of that process.”