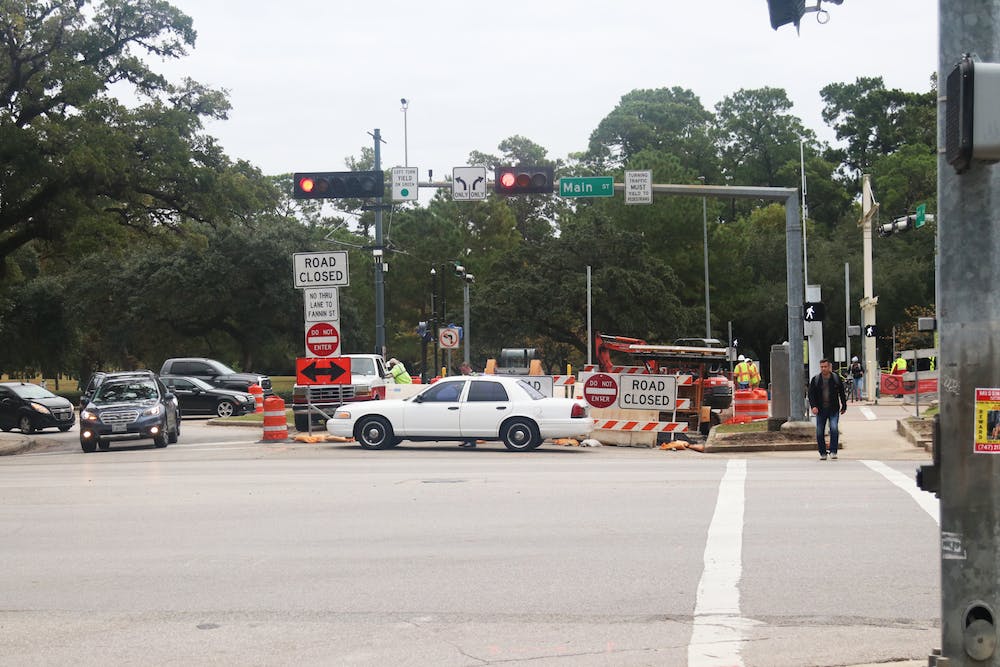 In order to increase pedestrian and cyclist safety near Entrance 1, the right turn from Sunset Boulevard to Fannin Street will be closed off and replaced with a median to facilitate traffic, according to Director of University Relations Greg Marshall.

To implement this change, Marshall said Hermann Park/Rice U METRO station was also closed on Friday and will not reopen until after Nov. 17. After the construction is finished, drivers will no longer be able to turn right from eastbound Sunset Boulevard onto southbound Fannin Street. Until the median to facilitate traffic is installed, construction signs divert traffic to turn either left or right onto Main Street.

Marshall said the changes follow a letter President David Leebron sent to Mayor Sylvester Turner over the summer with requests for the city of Houston, conveying specific requests and issues identified by the mobility safety committee in their report issued in spring 2018.

“Personally I am a big fan of the METRONext proposal, but it will nonetheless be a huge inconvenience for the METRORail to be shut down,” Lovett College sophomore Mary Liebig said. “I don’t use it for my to and from campus commute, but I use it to go downtown or to other places, and it will not be fun to not have access to it.”

A small roundabout for pedestrians and cyclists will be put in between Fannin Street and Main Street, according to former Rice University Cycling and Triathlon President Mary Natoli.

According to Natoli, a bioengineering graduate student, the changes were prompted following the deaths of two cyclists affiliated with Rice. Rice physics professor Marjorie Corcoran was struck and killed by a light-rail train in February of 2017. Sudipta Roy, wife of postdoctoral research associate Ujjal Bhattacharjee, was killed in a collision with a dump truck near campus in 2018. According to Natoli, many advocates called for change after these tragedies, organizing a demonstration on bike safety in May of last year.

“As the number of employees and students at Rice has increased in recent years and more and more people are using modes of transit other than motor vehicles, Rice has been increasingly concerned about the safety of those who travel to our campus,” Marshall said.

Marshall said that following Corcoran’s death, they created a mobility safety committee to evaluate safety needs on and around campus and draw up a report recommending improvements. He said the committee’s work was delivered in spring 2018 and was integrated into the five primary requests Leebron mentioned in his letter to Turner. Natoli said the mobility safety committee has not met since spring 2018 but she thinks they should be meeting continually.

“I hope the changes will make the crossing to Hermann Park less stressful and will make both the park and the METRO more accessible to Rice students,” Natoli said. “I also hope making the area more people-friendly will help condition drivers to watch out for pedestrians and cyclists in general, and will inspire more people-oriented development at other dangerous intersections.”

Recently, Hanszen College senior Catie Choi was injured after being hit in a collision at the intersection of Sunset Boulevard and Main Street.

“I think that the fact that accidents keep happening in the same intersections is not a coincidence,” Choi said. “There is obviously a problem with [the intersections], and it should be a priority as these accidents have serious consequences.”

Along with adding a median, Marshall said the construction will add new traffic signal hardware to enable more responsive pedestrian-operated walk signals. The changes will also add pedestrian and bike crosswalks leading to Entrance 1 and signs to prevent right turns on red from Sunset Boulevard onto Main Street. The construction is projected to be finished by summer 2020.

Natoli said that although the changes are a step in the right direction, there remains much more progress to make in improving biker and pedestrian safety.

According to Natoli, some improvements that could improve safety that have not been implemented include zebra striping on all crosswalks and a one-way contraflow bike lane around the inner loop.

“The administration stepped up traffic enforcement, cooperated with the designs for Sunset/Main/Fannin, and supported major improvements to the intersection,” Natoli said. “I think that this response was appropriate, but [more needs to be done].”

[11/13/2019 2:40 p.m.] This article has been corrected to reflect the fact that Natoli is the former president of Rice University Cycling and Triathlon.