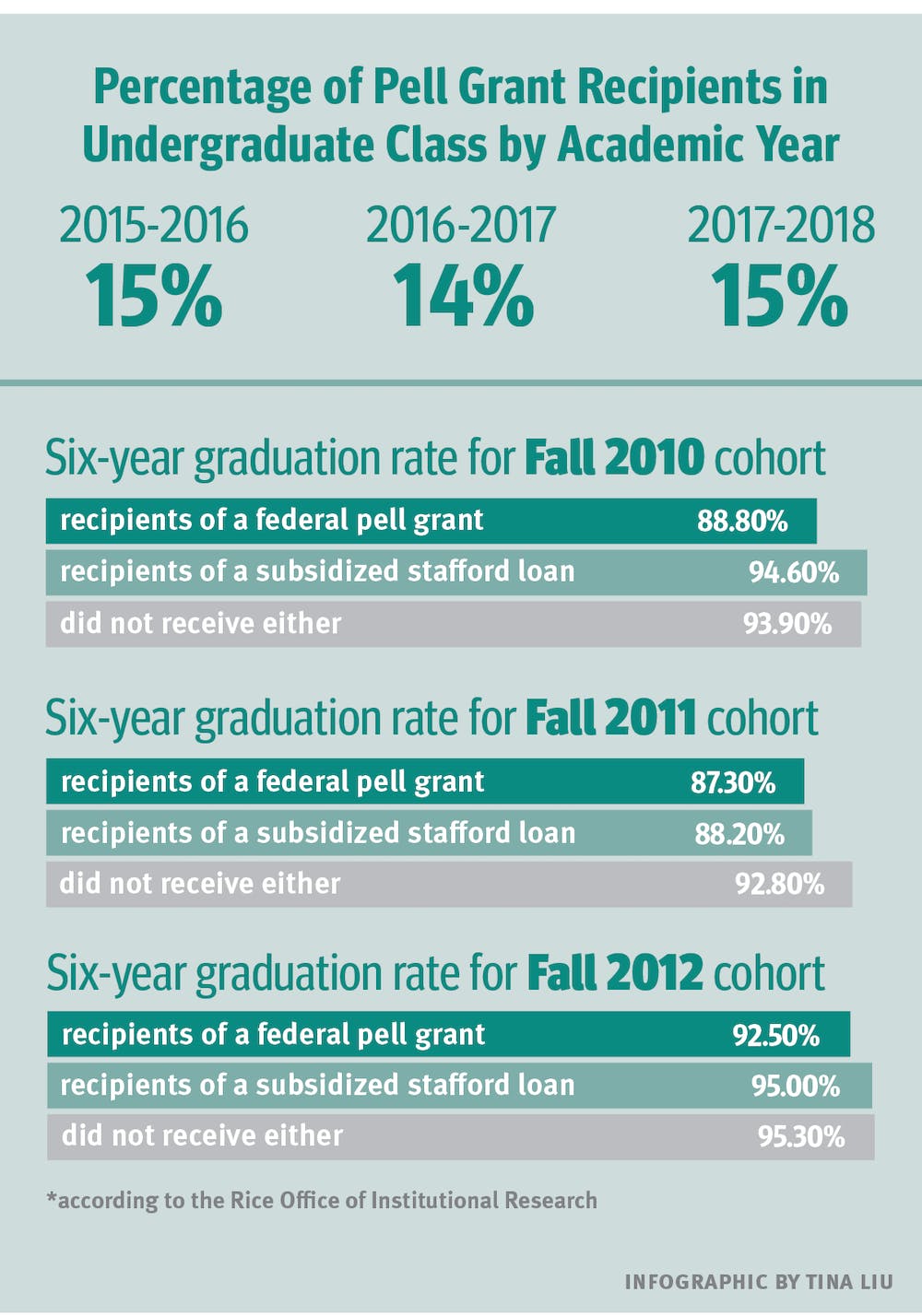 Graduation rates for Pell Grant students at Rice have trailed the university average for the past three years, according to the 2019 common data set released in May by the Office of Institutional Research. The finding highlights issues in social mobility and underscores the university’s No. 204 placement in the U.S. News and World Report’s Top Performers on Social Mobility.

Another component of this ranking is the percentage of Pell Grant students who graduate. Although this metric rose 5.2 percent in the last year to 92.5 percent, Pell graduation rates continually lagged behind the rest of the university.

Vy Pham, an ambassador for Rice’s First-Generation and Low-Income program, and a Will Rice College junior, points to resource disparities as a cause of lower rates of graduation among FLI students.

“They might not have access to someone who can guide them through college if they encounter problems,” Pham wrote in an email. “If they are low-income they may spend a lot of time working just to survive and less time focusing on school. Both of these can contribute to lower rates of graduation or delayed graduation.”

One possible explanation of the No. 204 placement is that U.S. News adjusts the rankings to give more credit to schools with larger proportions of Pell students, according to an article released by U.S. News data analysts. John Cornwell, OIR director, said he believes this calculation has caused the low ranking.

Data from the OIR reveals that the percentage of Pell recipients at Rice has wavered between 15 percent to 17 percent for the past five years.

“If you go to a big public school, it will be 50 percent,” Cornwell said. “I would say that including the Pell Grant and looking at the two graduation rates is probably something that has not helped us, but it also has been a negative impact for many other schools.”

Rice’s No. 204 placement is comparable to that of other private schools — Harvard University sits at No. 186 and Cornell University is ranked No. 224 — but pales in comparison to public institutions like No. 3 University of California, Irvine and No. 34 University of Florida.

Cornwell said that the figures being used to calculate social mobility, such as the six-year graduation rates of Pell Grant recipients, have not adequately reflected the implementation of the Student Success Initiatives in 2013 and the Rice Investment last year.

“Remember what they’re comparing are six-year graduation rates. That occurred six years ago, and so all these things that we’ve put into place would not affect this graduation rate,” Cornwell said. “If you look at SSI, they run programs to work with staff and faculty to help work with students who are first-generation or from a lower socioeconomic status.”

This program, according to SSI Associate Director Jessica Bowers Chukwu, is called the Rice First Network Supported Training and has been offered twice a month to around 10-12 faculty and staff in each session.

“We talk about who are first-year, low-income students at elite institutions because their experiences look a little different. And then we talk about how to support and best advocate for these students,” Chukwu said.

“Fridays out of the month we invite FLI students to eat lunch with us. We normally have it in a servery, and if you live off-campus, then we pay for your meal,” Chukwu said.