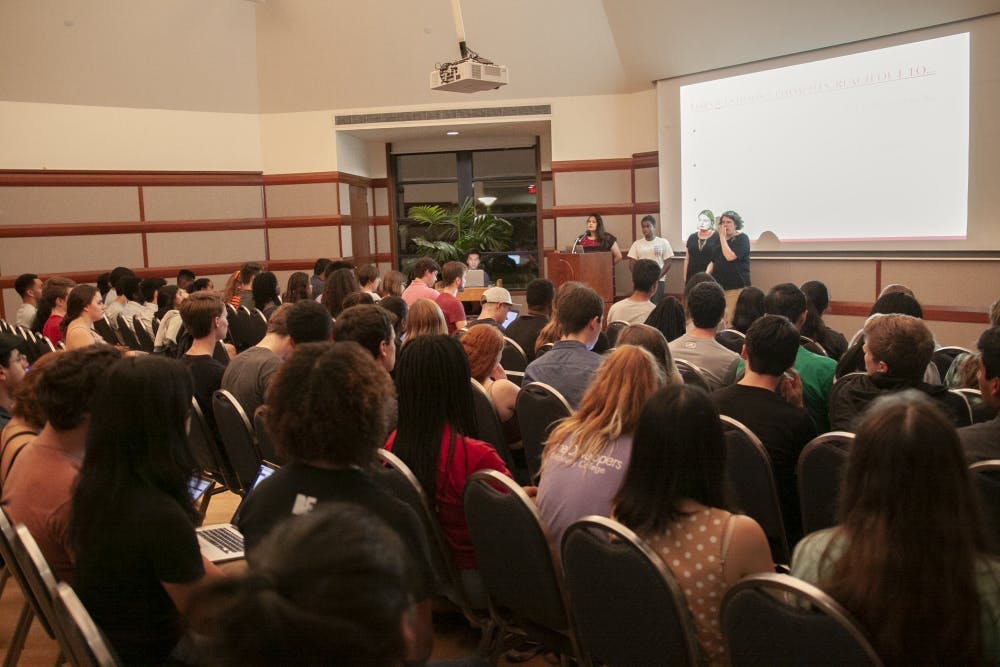 The Student Association Senate voted to approve the creation of a Student Legal Services Working Group Monday, Nov. 18 to understand legal concerns by undergraduate and graduate students, from housing contracts and visas to marriage and divorce laws.

“[SA President] Grace [Wickerson] met with [the Office of the General Counsel at Rice University] and essentially if you go on to General Counsel’s website, they’re not responsible for providing any legal services to students,” Lee, a Lovett College junior, said.

According to Richard Zansitis, the Vice President and General Counsel for Rice, because the office of the General Counsel has a professional relationship with the university as their sole client, they are not able to offer any help to individual students.

Zansitis said that he is aware of Student Legal Services Offices at various public universities, such as the University of North Carolina, Chapel Hill and the University of Texas, Austin, and that he mentioned these examples to Wickerson in their meeting.

“These Student Legal Services Offices have as their clients individual students in such areas as landlord-tenant, traffic matters, consumer issues, wills and family law matters,” Zansitis said. “These offices are not part of and do not report to the General Counsel’s office of those universities.”

Alessi Armengol, a Lovett senior, said she would like to see Rice have a legal services system similar to that of Stanford University, which has attorneys on retainer to assist students in legal issues.

“Lovetteers are lucky to have Geoffrey Riddle as a [residentl associate], as he’s been willing to offer help and advice with our legal troubles, but having a system set up for students across Rice campus would be very helpful,” Armengol said.

According to Lee, the working group will be comprised of four students, which includes two undergraduate and two graduate students. Lee will co-chair the group along with a fellow graduate student co-chair.

“I'll be co-chairing this with someone else from the Graduate Student Association just because there are a lot of issues, sometimes more I guess ‘adult issues,’ stuff like marriage and visas, things like that that might be interfaced more with graduate students,” Lee said.

Lee said they wanted to keep the group small so that it could be more efficient.

According to Tessa Schreiber, SA chief of staff, the working group is currently in a research stage, which will occur in three phases. The first phase will be a needs assessment at Rice to see what issues students care most about, the second will be a general peer institution review to see how other schools handle this issue and the third and final phase will be presenting these ideas to administration and determining the scope of programs and services that can be implemented at Rice.

Armengol said she thinks the group needs to conduct more research before any new campuswide system is considered.

“Although I think that this working group has the potential to make a positive change and help students who might not currently have the resources or adeptness to navigate legal documents and issues, I hope that the working group does a thorough job when they begin their research and present their findings,” Armengol said.

Schreiber, a Hanszen College junior, said that the group is a joint effort by undergraduate and graduate students, and that the two members from each student body will work independently to get their constituents’ feedback and concerns during the research stage.

Lee said she hopes to have the group and its research deliverable to the administration by the end of the spring semester when they will decide if the group should then become a task force.

Zansitis said that the group will need to consider the costs of implements any campuswide system.

“I told Grace that if the SA [Senate] wished to look into these programs, there are a number of schools they could look at, but any examination of the issue should also consider how such an office would be funded since the desire for such an office would need to be evaluated against other priorities for student programs and support,” Zansitis said.