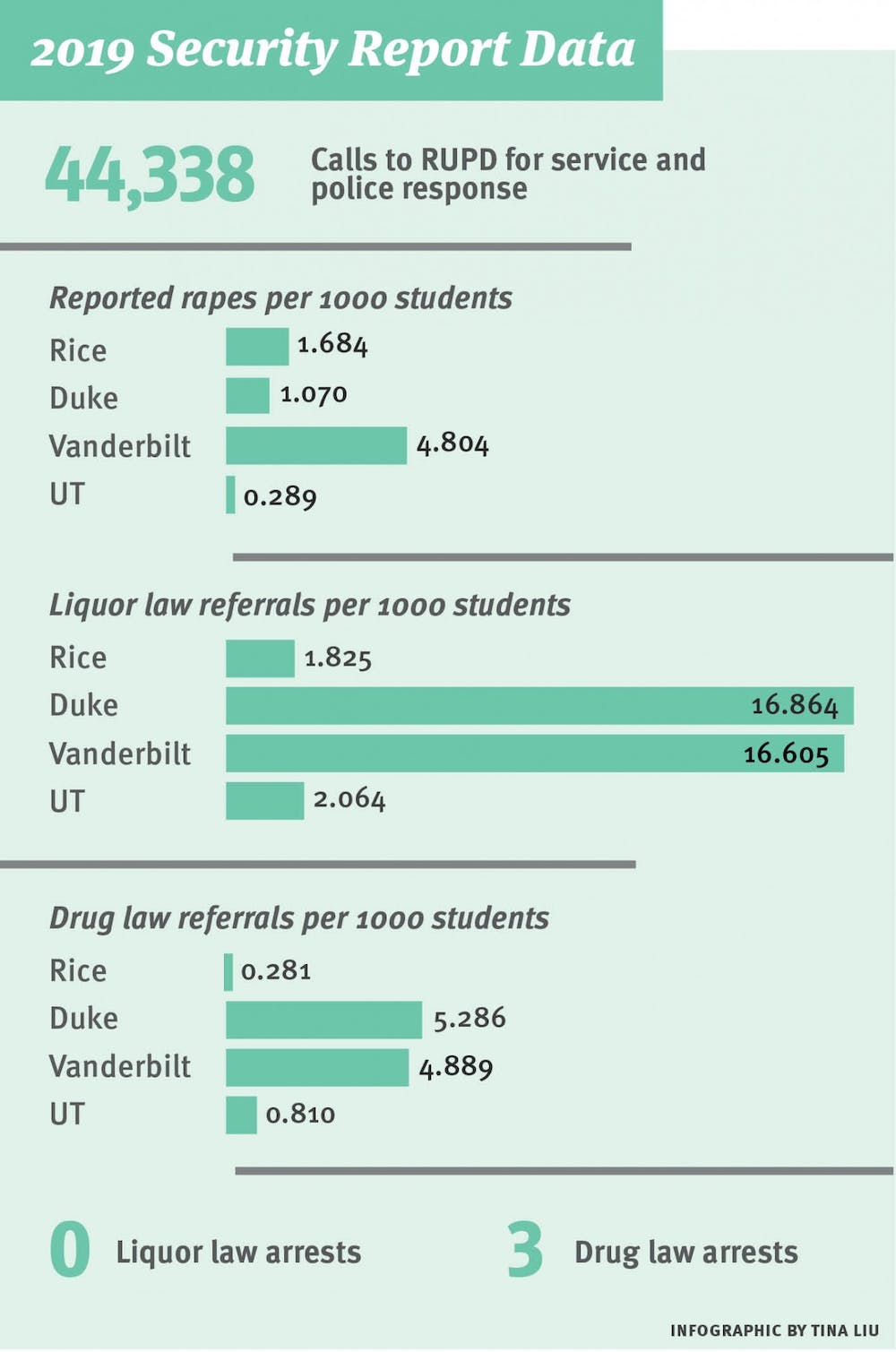 The 2019 Annual Security Report and Fire Safety Report, published in mid-October, documented an increase in criminal offenses including reported rapes, fondlings and motor vehicle thefts over the past year; at the same time, there was a decrease in liquor and drug violations, according to the Rice University Police Department.

The Clery Act, a law designed to provide transparency around campus crime policy and statistics, mandates that all universities receiving federal funding produce this security report, according to the Clery Center website.

While the number of reported crimes increased in multiple categories, Captain Clemente Rodriguez of RUPD said that slight changes are to be expected.

“With so many variables contributing to the number of reported crimes, it’s not uncommon to see year-to-year differences,” Rodriguez said.

A side-by-side comparison using 2018 enrollment numbers and data from the 2019 annual security reports from Duke University, Vanderbilt University and the University of Texas, Austin shows a number of discrepancies between the universities and Rice.

Among schools with published data, Vanderbilt had the highest number of reported rapes — 2.6 per 1,000 students.

According to Allison Vogt, associate dean of students and deputy Title IX coordinator, investment in programs and offices to address sexual violence on campus has made student reporting of rape more likely at Rice.

“When there is access to more resources, reported cases will increase,” Vogt said. “This is not to say that Rice has more incidents of sexual violence, just that students are utilizing the resources available to them.”

Laney Baker, the executive director for Students Transforming Rice Into a Violence-Free Environment, said that the number of reported rapes in 2018 shows that Rice is making progress toward a more accessible reporting process.

“Prior to CTIS and STRIVE and the campuswide conversations that came out of the 2015 version of the Survey of Unwanted Sexual Experiences, [the number of reported rapes] was zero or one almost every year,” Baker, a Martel College senior, said.

Baker said that there are multiple explanations as to why Rice’s numbers would differ from those of peer institutions like Vanderbilt.

“It’s possible that they have similar infrastructure to us, but I would also point out that both of those schools are fraternity schools,” Baker said. “We know that sororities and fraternities schools tend to have higher incidences of things that people are more likely to report [incidents] like forcible penetration.”

Vogt said that it is hard to make an accurate comparison between Rice and other universities regarding data on sexual violence.

“Even among our peer institutions, the procedures for investigating and adjudicating cases of sexual misconduct varies greatly,” Vogt said. “Rice’s process, as it currently stands, is designed to be as non-adversarial as possible, while still adhering to the necessary principles of fairness for the involved students.”

The number of alcohol and drug law violations also differed between the universities.

Rodriguez said he has not compared Rice’s drug and alcohol policy to other universities and did not want to speculate as to the effects of different policies at other campuses on their drug and alcohol violations.

Duke and Vanderbilt had similarly high rates of liquor law referrals and drug law referrals per 1,000 students. According to Vanderbilt’s 2019 Annual Security Report, the university will impose sanctions for people in violation of the alcohol and other drugs policy, “to underscore the seriousness with which it takes the issue of health and welfare of its constituent populations”.

Rice’s Statement of Policy Regarding Drugs, Alcohol, and Substance Abuse opens by saying that “all federal, state and local laws applying in Houston, Texas to the possession, use or sale of illegal drugs or alcoholic beverages also apply on the Rice campus and at locations owned or controlled by Rice.”

According to Rodriguez, Rice’s policy was developed to meet the campus’s needs.

“Rice puts a lot of time and effort into establishing a thoughtful policy that addresses both the health and safety needs of our campus community,” Rodriguez said.