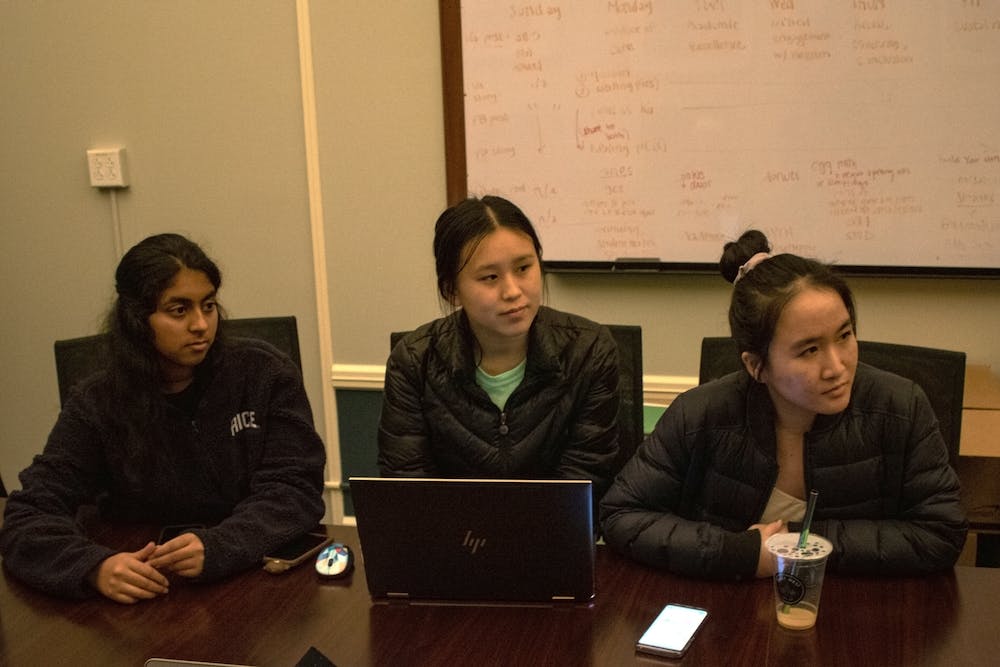 The Rice Student Association voted Monday night to approve Phoebe Dang and Amy Zhang as the official Campanile editors-in-chief. The SA narrowly reached the two-thirds majority required for approval, with 16 votes in favor and seven votes against.

Dang, a senior at Lovett College, and Zhang, a senior at McMurtry College, had been operating in the interim role for nearly seven months following Martel College junior Sahana Prabhu’s decision to resign from the position after being elected last year. Her resignation prompted the SA to launch a discussion as to whether Campanile intentionally subverted the constitutional requirements for the election.

According to the SA and Campanile constitutions, a candidate for editor-in-chief must have served on staff for at least one year. They can then submit an application to the Campanile executive board; if they receive a two-thirds majority approval, they will earn a spot on the ballot for SA elections.

In late January, Dang submitted a joint application with an unnamed staff member for approval from the Campanile executive board.

“The other person hadn’t really shown a whole lot of dedication in the yearbook before and he was very behind on meeting deadlines, so [the board wasn’t] sure if he was a good fit for editor-in-chief,” Dang said. “[They] rejected the application.”

The executive board rarely rejects applications, according to Dang.

Because the application had been rejected, the executive board planned to delay their ballot to the second round of elections and select a new set of candidates to place on the second ballot, but was informed by the director of elections at the time, Morgan Gillis (Baker College ’19), that that was no longer an option, according to Zhang.

Freddy Cavallaro, Student Association parliamentarian, said that Campanile received the same amount of time as every other position to submit their petition for the first election and that the second round is more of a failsafe and not guaranteed to happen.

“There is an assumption that there will be one general election for all positions,” Cavallaro, a Will Rice College senior, said. “Campanile may have expected this option but I don’t think they should have assumed it to be their best option.”

Short on time to submit a ballot by the Feb. 4 deadline, Prabhu said 2018-2019 editors-in-chief Charis Wang and Matthew Franklin approached her and asked if she would be interested in the position.

“I was like ‘I think I’d be interested’,” Prabhu said. “But it had still only been a year since I was in the yearbook so I knew I was going to ask Phoebe to do it with me.”

After the board denied her initial application, Dang, who was studying abroad last semester, said she had been considering her options to run again. She said she was unaware that Prabhu was also interested in the same role.

“Kelley [Lash], our adviser, had reached out to me before to say that I can either decide to run individually or I can get someone else to run with me,” Dang said. “I asked Amy if she wanted to run with me and she said yes.”

However, Zhang, who was also abroad during the deadline, said that the executive board already approved Prabhu for the ballot.

“The day the [2018-2019 editors-in-chief] sent out the official vote was Feb. 5. [The executive board] voted electronically and got the two-thirds vote,” Zhang said.

Although Prabhu was already officially elected through the SA elections, the 2018-2019 executive board referred to Prabhu as a placeholder for Dang and Zhang, according to Prabhu.

“The outgoing editors-in-chief were like ‘Oh since there’s another team interested, you’re just a placeholder and when they come back it’s gonna have to be me against them,’” Prabhu said.

According to Zhang, the use of the term “placeholder” resulted in a miscommunication regarding Prabhu’s intentions as editor-in-chief.

“I didn’t know that she was truly interested,” Zhang said. “If I had known that, I don’t think that I would have tried to run.”

Prabhu decided to step down from the role of editor-in-chief in late April, allowing Dang and Zhang to serve in the role together for the 2019-2020 year.

Prabhu said that because she is a junior, she still has time to become more involved and pursue other positions.

“There have been multiple times where people who have expressed interest in running decide not to run that year because there are seniors who want to do it,” Prabhu said.

According to Cavallaro, the switch in leadership following Prabhu’s step down created the concern that the Campanile had violated the requirements of the student body election.

“The highest ranking official is required to be voted on by the student body, and that was Sahana [Prabhu],” Cavallaro said. “There was a concern that Campanile either intentionally or unintentionally subverted this requirement, by spreading the notion that ‘the real Campanile’ election could happen after the student body election by having that person resign and then fill the vacancy internally.”

Hanszen College President Landon Mabe was one of the seven voting members who voted against approving Dang and Zhang.

“The Campanile board subverted the results of a student-wide election by installing editors-in-chief who were not Sahana,” Mabe said. “By voting to approve unelected editors-in-chief, the Senate is giving the Campanile a pass to run their organization without having to be accountable to the student body.”

Dang said that she hopes this issue will not affect the future operations of the Campanile in any way, given they are a blanket tax organization.

“I understand why the fact that we get a lot of money would be concerning to the SA, but I feel like we’ve always been responsible with it,” said Dang. “We don’t really want this to impede the production of this year’s book.”

After tallying the votes, SA President Grace Wickerson said that the conversation about the election processes would still continue.